Well, here we are again! The fifteenth season of Hell’s Kitchen is now underway. Get ready for tons more drama, nasty looking “food,” inept cooks, arguments, eliminations and, most importantly, lots of colorful language and tantrums courtesy of the one and only Chef Gordon Ramsay. If you haven’t seen this show before, you’re in for a real shit show, and I mean that in a good way! Episode one began last Friday and I am going to recap the premiere episode as the 18 new chefs embark on a grueling journey to become the winner of Hell’s Kitchen and earn a chance to be head chef with a generous salary. If you haven’t already read about the cast, you can click here to check them out! 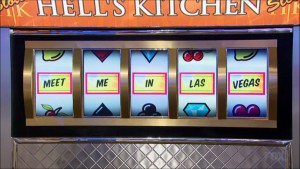 Season fifteen premieres as the eighteen new chefs (if you can call most of them that) are on a bus headed toward Hell’s Kitchen. They’re all cocky and ready to go in guns blazing. However, that will all change, I’m sure, when Chef Ramsay knocks them down a peg or two… or five… as they blunder their way through dinner services each week. The chefs enter the kitchen and are greeted by maître d’ 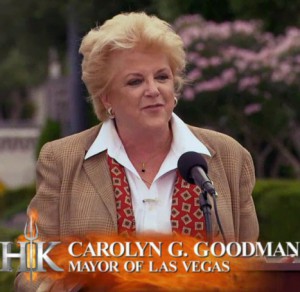 Marino and a huge slot machine (foreshadowing, anyone?). He calls Ashley over to pull the lever on the machine. When it finally stops spinning, it says that they 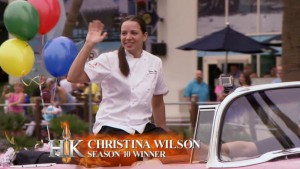 are to meet Chef Ramsay in Las Vegas. They all jet off to the Sin City where they take in the sights, including a huge marquee with all of their pictures welcoming them! They are welcomed to Vegas, and the competition, by Las 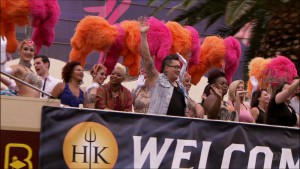 Vegas mayor Carolyn Goodman, who says that more winners of Hell’s Kitchen have been head chefs in Vegas than in any other city. They then get treated to a parade in their honor, and they even see a couple of past winners, including Christina from season 10, who joins this season as the new sous chef of the red team (Chef Andi disappeared after last season). 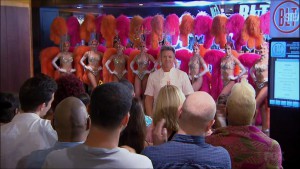 After the festivities are over, they head into Bally’s Hotel where they are finally greeted by Chef Ramsay. He informs them that the winner of this season will become the head chef at BLT Steak at Bally’s Hotel in Vegas with a salary of $250,000! He adds that they will be cooking their signature dishes to be judged by him right now! They now must be judged on their cooking ability in what could be their future place of employment, by the man who has their fates in his hands. So, no pressure right? They immediately scurry around the kitchen to throw something together in 45 minutes to try and impress Ramsay. 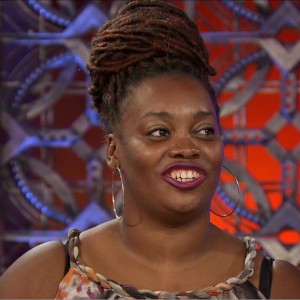 It’s now time for the chefs to be judged on their signature dishes. Up first is Sherkenna from Grand Junction, Tennessee. Chef Ramsay asks where she got her name from. Her response? “MY MOMMA!” He asks how many restaurants are in Grand Junction, and she tells him that there are none, and she has the most hilarious expression on her face when she says it. I seriously hope she doesn’t let me down. Even if she doesn’t make it to the end of the competition, I know she will keep us entertained with her witty remarks. Hopefully! Her crab-stuffed salmon isn’t impressive looking, but tastes okay. She only manages a score of 2 for the women. Not a good start, Sherkenna! Up next is Eddie with his Bambi tenderloin. Seriously, he had to call it that? BAMBI MURDERER! I hope he gets sent home early for that! He gets a 3 because it is beautifully cooked. U.S. Marine Frank gets another 3 points for the men, while 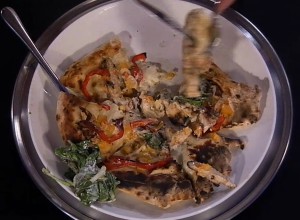 Ashley-with-two-dads only gets 2 points for her bland dish. Dannie gets 4 points for her dish and puts the women in the lead. Mark’s dish sucks and only gets a 1 because the mussels are “cooked to shit.” The next few dishes are judged and don’t impress Chef Ramsay. Jared pulls down another 4 points for the blue team. The next disaster of the evening is Kevin, who serves some pukey looking concoction which is supposed to be salad on pizza or some shit like that. It turns out that he used STORE BOUGHT INGREDIENTS in his dish! Seriously?! This show has been on for fifteen seasons now and he still doesn’t get that that is the number one no-no? If I was Chef Ramsay, I would have booted his happy ass right outta the competition right then and there! We are introduced to Kristin Barone, the blonde of the season, who has a RAP SHEET! It turns out, she started learning to cook while she was on house arrest. This girl’s gonna be fun! Thug life! The men end up pulling out the victory in this challenge after Hassan scores enough points to pull them ahead of the women! As a reward, they get to board the High Roller, the tallest observation wheel in the world. While they get treated to the sweet life in Vegas, the women will be peeling tons of potatoes and shrimp for the buffet! Sucks to be them. 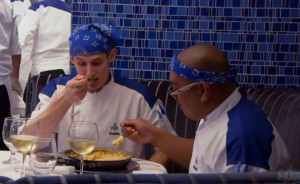 In Hell’s Kitchen, you must EAT your mistakes. Now these two know what shit tastes like.

It is now time for the first dinner service of the season. This will give us our first look at who has the skills and who will probably flame out early. Things get off to a rocky start right away as Vanessa screws up on the appetizer station. I almost feel bad for the girl for being so flustered… almost. But, I’m an asshole, so I think it’s kind of funny watching these people freak out. Especially when they burn pizza and still continue slicing it up! LOL! The entire team ends up having to jump in and bail her out as she continues sinking. Meanwhile, the men aren’t faring 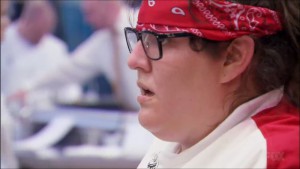 much better as Mark continues producing total shit and bringing dinner service to a halt from the blue kitchen. Eventually, the men end up being kicked out of the kitchen for sucking so hard. I see a pattern with these things, the team that wins the challenge in the beginning usually ends up getting cocky and unfocused and they totally bomb on dinner service.

As the losing team, the blue team must name two nominees to face Chef Ramsay for elimination. They decide on Mark and Kevin. Excellent choices. At least they did something right! Ramsay is so pissed at their performance that he threatens to send both of their asses packing. He should have! Kevin is too lazy to cook his own food instead of opening up jars and cans, and Mark just sucks! But he eventually sends Mark away and he becomes the first casualty of season fifteen.

What are your thoughts on the season premiere? Did the right person get sent home? Who do you think will go next? Let me know in the comments below! Be sure to check out all of our other content at YRR, including Dana’s Bachelor blogs! Also, for the very first time, we have blogs covering the latest season of Celebrity Big Brother UK, which is always full of drama! There’s something for everyone, so check it out!