Here we go once again… time for another episode of Hell’s Kitchen. This episode continues after last week’s elimination of Sarah. (For the rundown of last week’s episode, click here) They’re really starting to drop like flies, and this episode is no different! Read on to find out who leaves in this episode!

Hell’s Kitchen… where everybody knows your name

We begin with the chefs gathered downstairs in the kitchen ready for the next challenge. Chef Ramsay tells them that each team will be cooking with three different types of alcohol: beer, liquor and wine. They will each cook as individuals and can cook whatever they want as long as it uses alcohol. We are introduced to two guest bartenders: Marino, who is the maître d’ of Hell’s Kitchen, and John Ratzenberger, the know-it-all barfly from the show Cheers as well as every Pixar movie ever. The teams decide who will be using what alcohol and now they have 45 minutes to create their dishes for the challenge. 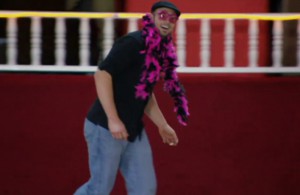 The 45 minutes are up and it’s time for the chefs to determine which dishes to use for the challenge. The team that earns the most points from their dishes will win the challenge. Up first, we have Nick and Michelle with their beer dishes. Michelle’s soufflé earns 11 points for the red team while Nick’s donuts fall just short with 10 points. Next, Alison and Adam face off with their wine dishes. Alison’s ribeye scores 10 points while Adam’s lamb with port wine also scores 10 points for the blue team. With the women ahead by one point, it all comes down to Meghan and Josh with their liquor-based dishes. Meghan’s duck breast secures just 9 points for the women because she failed to cook off all the alcohol. Josh’s grilled pork earns 11 points, which means that the blue team wins this challenge by one point! The men will enjoy a fun-filled afternoon skating at the Moonlight Rollerway while the women will spend the day ironing and starching the tablecloths and napkins, steaming glassware and polishing silverware.

The next morning, the teams begin prepping for the next dinner service. Bret leaves to use the restroom and stays gone a really long time. As the camera cuts to a shot of the restroom with Bret moaning and groaning in the stall, we are left to wonder what is going on in there: that must either be one heck of a deuce he is pinching off or something is wrong! Meghan goes and asks Bret if he is okay, and he asks her to get him a medic. As it turns out, his back has gone out due to slipped discs and pinched nerves. Chef Ramsay gets word that Bret is in the dorm and goes to check on him. Due to the strenuous and fast-paced nature of working in the kitchen, Chef Ramsay has no choice but to remove Bret from the competition and send him home. Chef Ramsay goes back downstairs and notifies the teams that Bret will not be returning to the competition. Most of the chefs have looks of concern or disappointment on their faces, but Nick actually smirks at this news because it’s one less person in his way: “Sucks to be you, Bret!”

With that little bit of unexpected drama out of the way, it is time to begin another dinner service. Tonight, each chef will be alone on their stations and will not be able to hide their mistakes. Also, there are VIP guests (Fred Willard and Jaleel White) dining at the chef’s tables. So no pressure! Things are off to a strong start on the women’s team, while Adam has a communication breakdown with Randy, causing the blue kitchen to begin falling behind on their first entrees of the evening. Back in the red kitchen, Christine starts get a little overwhelmed now that there are multiple orders coming into the kitchen. Randy and Adam are pulled aside and yelled at for the continued lack of communication, causing the fish and meat stations to screw over the blue team’s progress. Both teams begin to send out entrees to the dining room at a good speed. Now, the orders for the VIP chef’s tables have come in and this is where the chefs are put to the ultimate test. The red kitchen get their VIP diners served in a timely fashion, but Adam overcooks the lamb and delays service. He tries again and this time he sends up raw lamb to the pass. This is the last straw for Chef Ramsay and he kicks the entire men’s team out of the kitchen, leaving the women to take over the blue kitchen’s orders.

The blue team must now nominate two of its members for elimination. This one is a no-brainer. Adam is the first nominee for his failure on the meat station and Randy is the second nominee for his disastrous performance on the fish station. The next person to be eliminated from Hell’s Kitchen is Adam.

We are now down to single digits and it isn’t long until the next chef is crowned the winner of Hell’s Kitchen. What are your thoughts on tonight’s episode and who is your favorite to win? Let me know in the comments below and on Twitter.

Your Reality Recaps is bringing you coverage on all of your favorite reality shows, including Big Brother Canada, Survivor, The Amazing Race, Bravo, RuPaul’s Drag Race and Hell’s Kitchen! Check it all out! Of course all of this coverage is FREE for you but we need your support! If you have any shopping to do at Amazon, use the link on the sidebar—it doesn’t cost you any extra, but they will continue to sponsor us! If you prefer, you an also make a donation via Paypal or Patreon via the links on the sidebar as well!