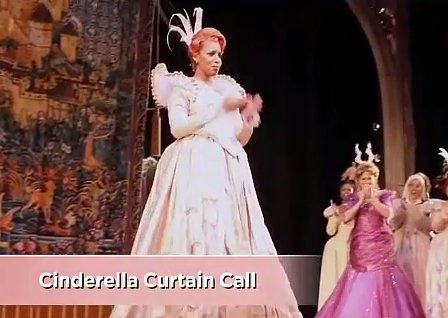 It’s the season finale y’all and everyone made it with weaves intact. NeNe is in New York about to debut on Broadway. She gets her first look at the theatre with Gregg and Brentt in tow. On the way to her first show she gets flowers from her realtor and remarks about how only Phaedra sent her a good luck text. These ladies were all offered tickets to see her show but surprise surprise NeNe never delivered on that, stating it’s the girls fault for not asking her about the tickets, and she didn’t want them there anyways. NeNe kills it in her debut and gets a standing ovation during the curtain call. She exits the building to hundreds of fans wanting her autograph and picture inflating her ego to even more epic proportions. Although I do agree with her message to everyone. Dream big….just don’t let your ego get as big as your dreams! 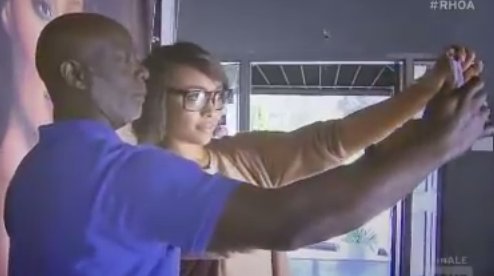 Cynthia and Peter have now closed Bar One old location and are renovating the new one. They stop by the old location and reminisce about all the memories they had there. On the way to the new location Peter drops a bomb on Cynthia. That bomb is called Peter’s Brew. I coffee shop he rented spur of the moment. WTH Peter. You are supposed to be concentrating on Bar One reopening and you spend more money on a coffee shop. He assures Cynthia his focus is on the bar while his partners is the coffee shop. With no time to recover the phone rings and shockingly is Apollo calling from prison. He complains that Phaedra hasn’t brought the kids to see him in the six weeks he’s been there, nor has she let his brother bring them in. He is trying to work on getting placed closer  to Atlanta. Cynthia wants to stay out of this. She learned from the Mr.Chocoalate incident that she needs to leave Phaedra’s business alone. Then Peter goes and brings up the divorce. Do you know your wife filed for divorce. He knows, not like there is much he can do about it though. Then we get to the reason for the call. Apollo’s last words were I was hoping you could talk to her, and his prepaid phone call ran out of time. Cynthia tells Peter she is not comfortable talking to Phaedra. She has NeNe and Kandi, both mothers who can talk to her about this stuff. 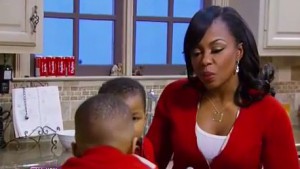 Phaedra is at home with her babies carrying on life as normal as she should. Baking cookies and keeping things light with a visit from Porshe. Phaedra is thinking through her decision to bring the kids to Kentucky long and hard. It’s not like it’s close by and there are no facilities for the kids. If she needs to do a diaper change or if Aiden needs to use the bathroom they have to leave. It’s a lot of think about and as she said a no win situation. Aiden could resent her for making him go to a prison or resent her for keeping him away from his father. It’s a touch decision and I don’t envy Phaedra at all. 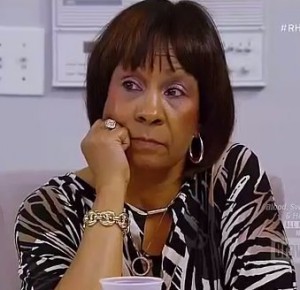 Kandi and Todd are invited over to Mamma Joyce’s house. It’s the first time Todd and Riley have been there and to deal with Mamma Joyce Todd needs to pre drink. Do you blame him, I’d be drinking too. Everyone is enjoying a nice meal that Joyce is taking credit for but we all know the old lady gang actually prepared when Kandi drops her own bomb. Todd’s show was picked up and she may go out to LA with him, and bring Riley. Neither Riley or Mamma Joyce are happy a bout the news. Then it happens. Mamma Joyce actually apologizes for all the things she said about Todd’s mother. She says she was just repeating things that were told to her and that is her biggest problem. She is better than that and she is sorry. Kandi is over the moon about the apology but Todd doesn’t feel it’s genuine. Will he ever be able to move past this? 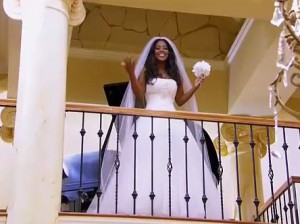 Kenya is in the last stages of preparing her pilot. Before she sends it to the networks she wants to hold a screening for all the girls. She wants to keep the good feelings they had for each other in the Philippines going. On NeNe’s opening night Kenya holds her screening. Dressed to the nines and arriving at a mansion the girls are confused. Are we at a screening or a wedding? They are pelted with rice as they walk in the door. A ribbon twirler is there for their entertainment and they are each presented with a 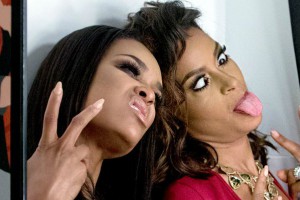 custom signature drink. Poor Claudia’s is called Hammer Time after her notoriously ugly feet. But where is Kenya? Kenya makes her grand entrance in a WEDDING DRESS and everyone is baffled. In the theatre the girls are given personalized popcorn bowls and Life Twirls On blankets. The show gets tons of laughs. Kenya’s voice over in the beginning is actually funny, and her chasing around the groom with a knife gets a lot of laughs. The most shocking was for the girls to see Cynthia with her Jamaican accent, revealing her weaveless hair. After the screening they all have some fun in the photo booth Kenya had so they can capture them getting along on film in case the friendships don’t last!

NeNe seems to have segregated herself from the girls this season. Will this be her last? What did you think of Season 7 Comment below and let me know.  Don’t forget to check out our BRAVO page for all our recaps on all the Bravo shows plus Jon is reading you the ladies blogs and giving you his take on the weeks events. ALSO we are covering HELLS KITCHEN, Survivor, Amazing Race, RuPaul’s Drag Race and so check out their pages to keep up on what’s happening. Head over to AMAZON.COM to do all your online shopping. You’ll get all the same great prices and it will also help us to continue to bring you coverage of all your favorite reality shows.