This episode was BANANAS! Absolute madness! Godfrey is fully awake now! Nap time is over and he is out for blood. He wants to bathe himself in Zach’s blood. The thirst is real. Newport has a quick meeting after the veto. Zach tells Jordan that Godfrey won’t be able to swing the votes. Jordan still has to trust him. Sindy sees Godfrey in a whole new light now after that crazy veto speech. Godfrey sees her as a top draft pick. Together they can go after Zach. They both have no one else, everyone else has a partner, they team up and they can make things happen. Sindy is being cut throat in her second life. Sindy is loving her time with Jordan. Regardless of her personal feelings toward Jordan he needs to go. She manages to convince her new alliance of 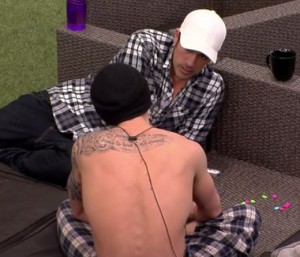 Sarah and Brittnee of her plan, she only needs two more votes to make this work. Sarah is totally down with the plan but doesn’t want to sway votes because she knows everthing gets back to Zach. Sindy goes to Bruno. She gets Bruno on board now he just needs to convince Bobby. Bobby is probably the hardest to sway. Like Caleb from BB16 he is intensly loyal to the Chop Shop. Bruno brings out the candies to visually show Bobby the Diaper Alliance (even though he doesn’t realize that’s what he just did) but Bobby for now still thinks they need Godfrey.

Zach emerges from the Diary Room with a task from Big Brother. Only 2 people can complete the challenge and they need to choose who. The decide on brains in Sindy and brawn in Bobby. They are told to go to the vault. There they find 2 buzzers, 2 beds and a 24 hour timer. Debates on 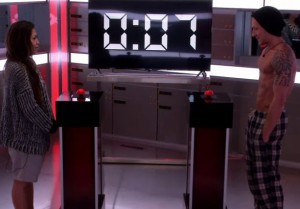 whether they sould push it begin. Bobby is all about not taking risks and doesn’t want to touch the button. Sindy is all over pushing it. PUSH THE DAMN BUTTON. Don’t screw up another twist! Just before their 24 hour timer is up the house gets to see what’s happening. At the end of their time Arisa shows up on screen and tells the two of them they have a decision to make. They have 5 minutes to decide to hit that button. The first person to do it wins $10 000 BUT that 10G comes out of the $100 000 prize AND if you press the button you leave the house IMMEDIATELY. Sindy is silently willing Bobby to hit the button. The house screen cuts out just before the 5 minutes is over leaving the decision a mystery. The time runs out, the vault opens and both emerge. No one hit the button. I wonder what would happen if they had hit the button before their time was up? 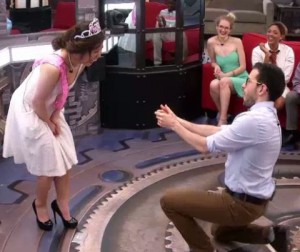 The house is scrambling with Bobby and Sindy locked in that vault. Godfrey needs them out to campaign and Bruno still needs to work on Bobby some more, but what was worse it was Sindy’s birthday while she was in there. She gets a birthday celebration the next day and she wants to hold a pageant class. Everyone participates because it’s her birthday so she teaches them how to wave, walk and talk. All dressed up they show off their new skills and then she asks them each a question. Jordan proposes to Sindy. Will you be in a showmance called JP with an S with me. So fraking cute. Of course she accepts. Pageant class is over! Time to get back to the game. Bruno still needs to convince Bobby that Jordan needs to go, and who was able to do it. Queen B herself. Brittnee blows his mind saying that Zach was going to backdoor him this week. Those words changed the course of this game! Sadly at Jordan’s expense.

This has been the most nail biting eviction show this season. The last chance speeches were spectacular. Godfrey up first expressed his only mission is to get Zach the heck out of the house. Who is better for you the guy who sleeps all day or the highly charismatic Jordan. Jordan said to evict 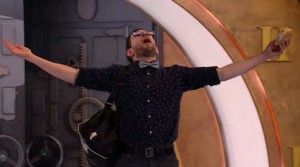 him because who else will sleep all day, start and end each sentance with the word yo and hide in the HOH shower. Wait. I can do all that. Keep me and I will assume all of Godfrey’s duties. Some find the speech cocky. I found it highly entertaining!  With only Bobby left to vote we are at a 4-4 tie. Will Bobby take Brittnee’s information to heart or will he blindly be loyal to the Chop Shop. Bobby votes to evict Jordan. With a 5-4 vote Jordan is evicted from the house. He is out of there faster than a cockroach scurring when you turn a light on. Without saying anything to anyone he grabs a bagel and his bag and runs out the door. Still chewing when he meets Arisa he hands a little girl his other half of a bagel, and probably made her life so far! What does Joran have to say for himself. I’M AN IDIOT! As a superfan he didn’t take his own advice but his attitude leaving that house was amazing. He is also the first member of a 10 person jury and is psyched about it! 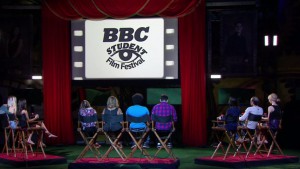 Who is the next HOH? We find out next week. We are left with another cliffhanger. They are playing Student Film Fest. Short films are being shown based on the competitions of the season. The first to buzz in and answer correctly elminates another HG. You answer wrong and you are eliminated. Bobby buzzes in first and is shocked to have the right answer. He elminates Sindy. I’m sure he was trying to answer wrong. Why didn’t he elminate Zach the guy who wanted to back door you Bobby? I just want to shake him!

Don’t forget to join Jon and I this week on Friday at 3pmEST for our Recap on our BBCAN page.  We also will be having exit interviews  on Thursdays so tweet us your questions #YRRLive right after the episode so we can ask them what you want to know.  Check out our exit interviews with the evicted house guests and past shows below.