Hey, y’all! Sorry I am so late but I am back to recap the last TWO episodes of Hell’s Kitchen season 15. I got a little behind, because real life has gotten in the way. Nobody informed me that the show moved to Wednesdays so I am now behind two episodes instead of one! But anyway, I’ll shut up and get to work recapping the latest in what’s promising to be a great season.

The teams head up to the dorms after Mark’s elimination. Frank is being all cocky saying how they need more Franks on the team to make them better. Gotta have the cocky douchebag on every season, right? Meanwhile, the women tell Vanessa to get her shit together so they don’t fall apart and lose any dinner services. She then runs away from the group in tears. Seriously, this girl needs to toughen up. If these women telling her to get better make her cry, I’d hate to see what happens to her when Chef Ramsay lets loose and screams all kinds of fun nicknames at her.

The most delicious dish being served in Hell’s Kitchen

The next day, everyone meets down in the kitchen for the next challenge. Chef Ramsay shows them how to make pleated and stuffed steamed dumplings. They will then have 20 minutes to work in teams to recreate perfectly prepared dumplings. The team with the most acceptable dumplings will win the challenge, obviously. Here is where the fun part comes in: Chef Ramsay tries to distract everyone from their task by bringing in drums and male strippers! This show just got a hell of a lot better, folks! Next come the sumo wrestlers, storming into the room, manboobs a-swingin’.

If this doesn’t ruin your appetite, I don’t know what will.

Is he seriously trying to make these people vomit on the dumplings? The time runs out and now it is time to see which team performed the best. The blue team gets off to a good start until they get to Hassan and cocky ass Frank, whose dumplings look more like pierogies. The men end up with 12 perfect portions of dumplings. They get off to a good start as well until the trio of Meese, Kristin and Manda show up with raw dumplings. Next are Sherkenna and Vanessa: Sherkenna’s baskets look like total shit, while Vanessa’s dumplings are

Chef Ramsay admires the culinary talents of this season’s cast.

beautiful. In the end, the women end up with 13 perfect baskets which means the red team wins the challenge! As a treat, they will be going to Malibu to dine on the beach at Geoffrey’s. While the women enjoy a helicopter ride and their reward dinner, the men will be back in the kitchen prepping for the dinner service by pruning organic mushrooms and hauling tons of fresh corn into the kitchen to be shucked.

Hell’s Kitchen is open for another dinner service. Tonight, in addition to regular kitchen duties, Manda and Hassan will be prepping and serving corn chowder tableside. The women get off to a bad start as Ashley forgets one of the most important things of dinner service: TURNING THE STOVE ON. Seriously, where do they find these people? Meanwhile, in the blue kitchen, Joe has a hard time remembering what Chef Ramsay called from the ticket just a few seconds ago and just stands around like a deer caught in the headlights. The Game shows up unexpectedly to Hell’s Kitchen without a reservation, and Chef Ramsay squeezes them in. He’s such a kind, hospitable guy, isn’t he? Both the red and the blue kitchens will be responsible for cooking their dishes. The women start to fall apart as Ariel takes Meese’s raw fish up to the pass even though Meese said it wasn’t ready. The blue team gains momentum as they are communicating well and sending food out the guests in a timely manner. The women are still circling the drain as Sherkenna keeps burning the Arctic char. (New nickname: CHARkenna) Dannie jumps in and saves the fish station at the last minute. Both teams manage to complete dinner service without being expelled from the kitchen. However, the losing team of the evening is the red team.

As the losers, the red team must nominate three of their own for elimination. After the usual bitching and bickering about who should and shouldn’t be put on the chopping block, they reach their decision. The first person up for elimination is Meese for being weak on the fish station and being poor at communication. Ariel is the second nominee for being a bitch and sending up Meese’s raw fish. The final nominee is Sherkenna for burning the fish time and time again. Chef Ramsay ultimately decides to send Sherkenna home. With that, we are now down to 16 chefs.

Okay, now on to the third episode. The teams head up to the dorms after Sherkenna’s elimination. Meese is still pissed off at Ariel for being a bitch and taking her uncooked food to the pass. Ariel tells us in her camera confessional that Meese isn’t fit to be a dishwasher… she should be a telemarketer instead. I’m already loving the catty drama from the women this season. Meanwhile, Jared is spending his down time flirting with the women. He reminds me of a dog that hasn’t been neutered that tries to hump anything that stands still long enough. 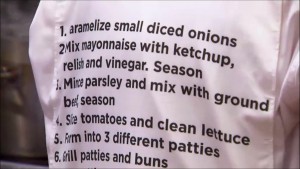 Everyone meets downstairs in the kitchen for the next challenge. Chef Ramsay greets them in French… and not the kind of “French” he usually speaks. He tells them that they all speak the same language but their communication skills among one another are complete shit. He makes them all take off their jackets. They are given new jackets to wear that have recipes on the back of them. This challenge gives each group 40 minutes to read the recipe off the other person’s back and try their best to communicate the recipe and make the dish. The team with the most correctly executed dishes will win the challenge. This one should be fun. Everyone sets to work to try and get everything done to Chef Ramsay’s standards. They start figuring out based on the recipes what dishes they will be making. Frank decides that he wants to put his own twist on the recipe to make it “better.” Seriously, I can’t with this guy. He annoys the shit outta me. Vanessa, frazzled as ever, manages to forget to turn the gas on. DURRRRRRR! Time runs out and it’s time for the judging. Up first are Kristin and Hassan with their spanakopitas. Kristin’s looks like total shit and sticks to the plate because she and her group can’t communicate to save their lives. So Hassan gets the point for round one. Up next are Frank and Ashley with their slider burgers. Frank’s utter failure to follow a simple recipe automatically loses the point for his team and it goes to Ashley. Manda and Eddie are up next with their dishes. The blue team scores another point because Eddie made the required taquito while Manda made a burrito, even though it was seasoned beautifully. Meese and Alan are up next with the fish sandwiches. The ladies get the point for this one. Vanessa’s cheesesteak is bland so Kevin gets the point for the men. Ariel and Jared both score a point for their spaghetti carbonara. Joe and Jackie are next with the eggplant parm. Joe gets the point for the men and the blue team wins the challenge! 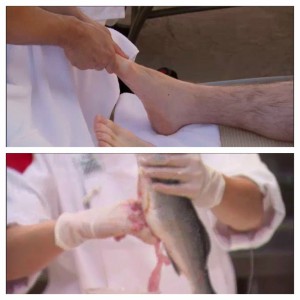 Which is worse: gutting a sea bass or watching Jared writhe in ecstasy while getting his nasty feet rubbed?

For their reward, the blue team will be going to Santa Barbara and getting their feet massaged and a lesson in mixology. Now this is a kind of reward I’d love! Booze and footrubs, you can’t go wrong there. But watching Jared moan and jizz himself while getting his grotesque feet rubbed made me wanna toss my lunch. Meanwhile, the women will be stuck in Hell’s Kitchen will be gutting and cleaning fish in preparation for the next dinner service. Oh, and they will be dining on a disgusting fish head soup. Jackie claims that she loves to eat it and wants the eyeballs if no one else does. She’s either trying to psych them out or she’s really really gross. I’m gonna go with gross.

It’s time to begin prepping for dinner service, and the women are understandably bitchy because they have been dealing with their punishments all day. However, Jared is also being a catty bitch in the blue kitchen as he tells everyone to follow the recipes and not what they wanna do… an obvious jab at Frank for his failure in the challenge earlier. Gotta hand it to Jared, though. He totally did what I would have done. Chef Ramsay tests the women’s communication skills throughout dinner service to see if they have improved. It is obvious that they haven’t as Vanessa and Kristin both can’t repeat the tickets back to Ramsay when asked. Things don’t improve much for the red kitchen as communication still sucks and Meese even manages to throw out perfectly cooked beef Wellingtons! These people are complete dunces! They end up getting thrown out of the kitchen before dinner service is completed. Meanwhile, the men have their own fair share of mishaps in the blue kitchen but at least they complete the service.

As the losers, the women must nominate two of their own for elimination. The first nominee they decide on is Meese for her stupid decision to trash the Wellingtons. The second nominee is Vanessa, because well… it’s Vanessa. Chef Ramsay decides to send Vanessa home because she is a disappointment and he doesn’t think she is ready to be head chef at BLT Steak. This was an elimination that took two weeks too long!