This week we are treated to two episodes in one week, so here is the break down of Chris Tells All (not really) and Episode 7 before we jump into hometown dates! Firstly we are treated to the return of Kelsey. Did we not just get rid of her? Thankfully it was only 15 minutes and in that 15 minutes we learn she’s still fake as ever and the Women Tell All should be FANTASTIC. Up next in the hot seat was Chris. He explains why he threw Ashley under the bus. Turns out he knows less about women than he though. No kidding We got a nice montage of Crazy Ashley wandering the mansion inside and out. Turns out she was convinced that accounting was a betting ring on how long she’d last. Yup Cuckcoo for cocopuff right there. The best (or worst) part was Andi’s return to explain her break up with Josh. She was emotional the whole interview and managed to again say the same thing in 5 different ways just like Nikki did. I swear the ABC PR people prep them on how to do that. Turns out they had been struggling for a while but when asked why they don’t have a date planned for the wedding was the real eye opener. Two passionate people in a relationship makes for a volatile one. Really the bottom line is that Andi is devastated and so is Josh.  She has lost her first true love and I really do feel for the girl.

But on to the fun stuff! Chris sent home two girls on the 2 on one date and now it’s time for a cocktail party. First he takes Megan to talk. She actually brings up how she feels she is miles behind the other girls in terms of their relationship. Chris agrees with her and they decided then that there is no point in her continuing on. She leaves leaving the other girls shocked and confused. One more girl is supposed to go home but Chris decides that he has such strong feelings for the 6 girls left he can’t make a cut and all of them are going to Iowa! 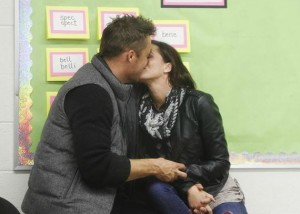 Jade’s given the first one on one and she is going to visit him hometown. Chris really wants these girls to be sure they can see themselves living in Iowa. Britt is insanely jealous and you can tell this is going to be a bad week for her. Chris shows her the farm and his house. The town is literally the town time forgot. Streets are deserted, businesses are closed up. There is no restaurant, no grocery store, no nothing. There is small town and then there is Arlington. Jade is having a bit of a hard time adjusting. In the evening he takes her to his high school where they watch a football game. He shows her around the school, introduces her to his parents! Yes….if only he knew her secret! They are urged to kiss on the football field in which they do. What did you think of Arlington? I could not live there! No way no how! 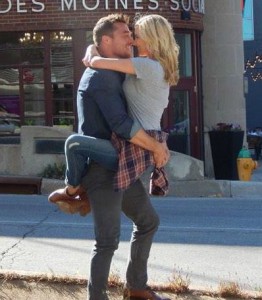 Whitney is given the  second one on one. Her and Chris are spending the day touring Des Moines with a camera, photographing their love story. These two are super cute together, like sickening. They go to dinner where Whitney is surprised to meet three of Chris’ best friends. These guys quiz her about moving and if she comfortable with it and she answers them well. We learn that she has no issues uprooting her life for someone she loves. Little does she know just how remote Arlington is. The coolest part of this date has to be that while they were in the restaurant a mural was being painted on the side of the building of one of their pictures that they had taken during the day. Whitney was over the moon about it! I have to say that Jade and Whitney seem to be the front-runners in this. You don’t introduce just anyone to your parents or your best friends!

While Whitney is on her date the girls are stir crazy at the hotel. Carly spearheads a road trip to Arlington. Everyone but Jade packs up and takes the 3 hour trip to Chris’ home town. Shocked isn’t the word for  their reaction. But this expression on Britt’s face tells it all! Carly peeks into the church because it’s locked and sees the same picture of Jesus that her grandparents have and takes that as a sign they are meant to be. The meet some locals one of them is the pastor or the closed church. When asked what they do in Arlington, he answered you go somewhere else. Britt says she can’t see herself living there.That night Jade also finally reveals her secret to Carly. She modeled for PlayBoy a few years back and she’s scared to death to tell Chris. Carly can understand why. Who want’s to say hey mom and dad……don’t google my wife? How do you think Chris will react to the news?

It’s time for the group date and Becca is absent from this. Why was she not included in a date this late in process. I really need to know! Anyhow……the girls and Chris all go ice skating. They have a fun time on the ice. Chris can’t skate worth beans and it was fun to watch him fall. My issue with him this whole season is his favoritism. He takes Britt outside somewhere private to have their conversation. Britt is telling him she LOVED his hometown and she can’t wait to go there, when we know she said the opposite. He sits with Carly in the stands for Kaitlyn and Britt to watch their one on one go down. Carly (and this is going to be her downfall) can’t stand by and let Britt snow him so she uses HER time to rat out Britt. Right there, she just put herself in the friend zone. At the after party Chris takes Britt again to confront her on what Carly said. Britt manages to get herself out of it and really make Carly out to be the crazy one in this situation. Then Chris talks to Kaitlyn. She has been feeling nervous, it’s been so long since their date and she’s not sure who things are going with them. Chris does his best to reassure her that they are where they need to be. To make her feel more comfortable he gives her the only pre rose ceremony rose. As Chris and Kaitlyn walk in you can tell Britt is 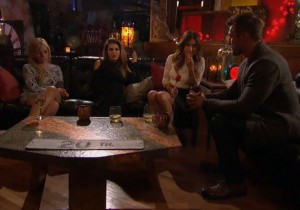 about to lose her mind. I swear Kelsey has inhabited her body. In front of everyone she tells Chris that she doesn’t know if she can bring him home if she thinks she’s not first in line. She should have that rose. Chris tries to calm her but it’s not working and finally she just leaves leaving the girls to sit in awkward silence. Britt has made Kaitlyn feel terrible and Carly points out she got that rose last week, she can’t have it every week but Britt doesn’t care. She says she needs to reevaluate…hopefully to the point she leaves the show!

It’s time for hometowns, who do you think is going to be the final 4? Comment below and let me know what you thought of this episode! Don’t forget to join Michael and I every Tuesday at 7pm EST on our ROSES page where we break down everything that happened and let you know what we think!  Don’t forget we are also covering King of the Nerds, Celebrity Apprentice and RHOA, RHOBH and Vanderpump Rules