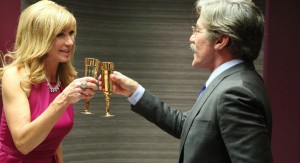 It has all come down to this. Sixteen celebrity hopefuls showed up hoping to be the next Celebrity Apprentice. Fourteen wannabes have been fired, and now two remain. We have seen lots of drama, rivalry and even a couple of overblown egos. Now, only Leeza Gibbons and Geraldo Rivera remain. Who will be the next one hired by Donald Trump? Read on to find out!

We begin the live finale with Donald Trump patting himself on the back about how he was right about this season being bigger and better than ever. He introduces the final 2 and it’s funny to hear the cool reaction to Geraldo’s name from the audience, while Leeza gets much louder, more enthusiastic applause. I think it’s clear who the public favorite is. Hopefully we will get our way!

Now to where we left off last week: both teams are working on shooting their commercials to be presented at the red carpet finale event. Team Geraldo is up first and Geraldo’s ego is not showing any signs of getting smaller. He is filming himself as a reporter outside of Universal Orlando resort. This commercial is more about him than it is the resort. Surprise, surprise!

On the other side of things, Team Leeza is going ahead with their plan to feature a father who tries to schedule his family’s fun at Universal and then realizes that it’s better to have fun spontaneously than to stick to a rigid agenda. Leeza’s commercial focuses more on family and everything Universal Orlando has to offer. Her team seems to be rolling right along, sticking to a tight filming schedule, thanks to the help of Kevin Jonas (who, in my opinion, was fired too early).

Both teams work with an editor to create the final versions of their commercial. Leeza is concerned that Geraldo will once again work his rich connections and easily get a half million dollars worth of donations. Does she let this defeat her? No. She presses her team to work any connections they have in order to scrape enough money to beat Geraldo at the fundraising portion of the project as well.

Trump then introduces the fired celebrities (minus the ones who are working on the final project). Right away, he butchers Keshia’s name. I mean, how hard is it to pronounce these names? Has he not worked with them enough by this point to know their names? I guess it doesn’t matter when you’re a multi-billionaire.

It’s now time to find out how Leeza and Geraldo to bring in as many last minute donors as possible. Geraldo brags about how an old guy (him) can still “get it up” and America collectively vomits. Both teams are bringing in their connections at the red carpet to try and earn as many donation dollars as possible. Geraldo rakes in thousands of dollars from his Fox News cronies, and Leeza manages to score a $100,000 check from one of her biggest supporters. 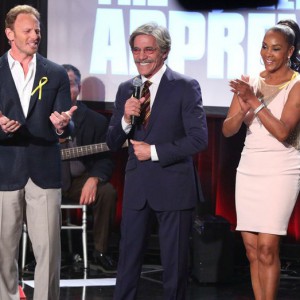 Both teams are now ready to present their commercials. Up first is Team Geraldo. He introduces his team and, not unlike Donald himself, butchers their names horribly. Ian Zierling? Really? Ian gets the last laugh though when he calls Geraldo “Geral-dildo.” That, folks, was the best line of the entire season. For that, I take back every mean thing I ever said about Ian. That was priceless! The audience looks severely underwhelmed as his commercial plays on the screen. It was as anyone expected: all about Geraldo, not about the subject of the commercial. Geraldo brings his friend Tony Orlando up on stage and he tells his personal story of his sister who has a mental handicap and how Geraldo’s charity has personally helped. It was kind of a sweet moment to see how much Life Worc has helped his sister out. 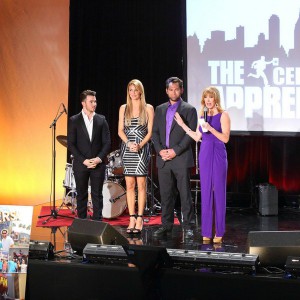 Next up is Team Leeza! Leeza graciously thanks Trump for the opportunity and tells about her charity, Leeza’s Care Connection. Time to roll the commercial! People seem to like it, even Lorenzo. He stops short of saying it’s better than Geraldo’s but we all know he thought hers was better. After the commercial, Leeza shares the story of her mother, who battled Alzheimer’s disease. She then introduces Olivia Newton-John who sings for the crowd.

The two teams meet Donald in the boardroom. It’s not yet time to find out the winner, but we will find out who brought in the most donations! Universal liked that Geraldo incorporated celebrities into his commercial, but felt it was disjointed in the presentation. They also didn’t like that the parents and children didn’t enjoy the park together as a family. Universal loved Leeza’s voiceover work and how she featured all the park had to offer. They also loved how she tied in her charity and included Olivia Newton-John. They felt she could have incorporated a celebrity endorsement. Now, on to the money. Trump tells the two teams that it wasn’t even close. Ivanka says that Geraldo and his team brought in $146,000, which is not that impressive for someone with so many rich connections! Time for the big shocker: Donald Jr. says that Leeza and her team raised a staggering $324,000!

The losers are all reunited, including the ones who helped Geraldo and Leeza on their final projects. We are taken back through the whole Phonegate scandal and Trump gives Kenya a chance to come clean, but of course she doesn’t. Vivica still holds firm that Kenya is a low down dirty liar, and Brandi agrees that it had to have been Kenya or her hairstylist. It’s safe to say those two will never become besties. 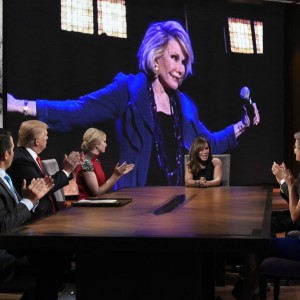 We are given a special tribute to the late great Joan Rivers, a comedian and the only female winner of Celebrity Apprentice, who passed away last year. Her daughter Melissa joins Trump at the table for the tribute. We see clips of her many appearances over the years, both as a contestant and boardroom advisor. It was a touching tribute and it was hard (for me at least) to hold back the tears. RIP Joan! 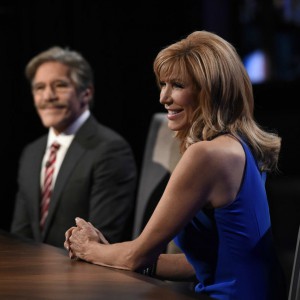 hired as the next Celebrity Apprentice. Both finalists present emotional, touching stories about their charities. While both are great, deserving charities, only one finalist is deserving of the title of Celebrity Apprentice and the $250,000 bonus check. Geraldo makes the case that Leeza is the “safe” choice and that Trump should take a risk by choosing him as the winner. In other words, Geraldo is admitting that he sucks in 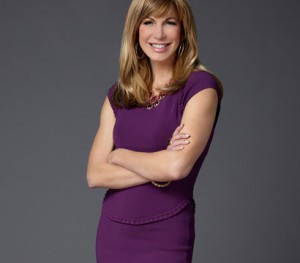 comparison to Leeza. Leeza throws Geraldo under the bus by saying she saved his team from yet another failure by taking over as PM after joining his team. We find out that Leeza’s commercial won, meaning she won both parts of the final task. It’s now time to find out the winner of Celebrity Apprentice 7. And the winner is…….. LEEZA! Congratulations, you deserved it the most and the fans agree!

Are you happy that Leeza won? What are your thoughts on this season? Which celebrities would you like to see on season 8? Let me know in the comments below! Thanks for watching and tweeting with me all season. You can follow me on Twitter @vince1187 if you want to read my smartass opinions on TV (and anything else). Be sure to follow @RealityRecaps and of course yourrealityrecaps.com for the latest on your favorite reality shows! We have all kinds of content including Dana’s Bachelor blogs and live recap shows each week, Melissa’s awesome King of the Nerds recaps, and of course all of the wonderful Bravo coverage. And don’t forget: if you love to shop online be sure to use this link if you buy anything from Amazon. You pay the same prices, but we get a little bit of money in return and it helps us to bring you all the latest reality news, gossip and spoilers!  🙂