Well, the number of chefs in Hell’s Kitchen is starting to dwindle and s!#@ is getting real! Last week saw the “surprising” elimination of Randy after his team had the best performance of dinner service. (For a complete recap, click here) After last night’s two hour back-to-back episodes, the kitchen is down two more chefs and they are now wearing the coveted black jackets! Keep reading to find out what happened and who left in last night’s episodes.

The first hour begins with the chefs meeting downstairs for yet another crazy challenge from Chef Ramsay. He throws a lot of keys onto the floor and they each have 35 minutes to find out which locker their keys open and then use the cut of meat that is in the locker to “cook an amazing steak with an incredible side dish.” 35 minutes is not a lot of time to prepare an amazing meal, let alone search for keys to open lockers too! Some of the lockers have great cuts of meat, some have not-so-great cuts, and some have nothing at all! So the chefs waste a pretty good chunk of their time allotment just trying to open a locker with a decent cut of meat, especially poor Michelle who wasted over TEN MINUTES just trying to find a locker that would open!

After frantically getting their steaks cooked to perfection (hopefully), Chef Ramsay announces that he will be judging their dishes a little differently than usual. He unveils a throne and says that he will be tasting their dishes individually. In a knockout competition, the chef with the best dish will get to sit in the throne, until someone with a better dish comes along. The chef still sitting in the throne at the end of the competition will win for their team! T is up first with her rib cap and it was cooked beautifully. Obviously, since she is first, she gets to sit in the throne by default. Up next is Milly with his New York strip steak. It does not impress Chef Ramsay at all because it is raw, so T is still in the throne. Third, we have Josh with his porterhouse. However, his steak was overcooked, so he will not get to sit in the throne either! Next is Meghan with her porterhouse. She manages to dethrone T since

hers was so beautifully cooked. Next is Alison with a ribeye. He doesn’t even taste the dish as it is obviously way overcooked. Next is Nick with a New York strip but he was not careful with his use of garlic. Finally, we have Michelle with her flank steak. Chef Ramsay was so impressed that she was able to take such a cheap cut of meat and elevate it to the “premiere league” that he tells Meghan to give up her seat. Michelle takes the throne and wins the challenge for the red team! As reward for winning, the red team gets to take a trip to the beautiful Catalina Island and take a beautiful submarine ride, followed by a four-course dinner at Catalina’s members-only beach club! They have another gift waiting for them upstairs as well. They unlock a chest to find that they all received a Vitamix blender. On the other hand, the blue team’s punishment is to break down a 250-pound side of beef and cut it up into steaks for the next dinner service.

It’s time for dinner service and it is steak night in Hell’s Kitchen. The menu even features Michelle’s flank steak that won the challenge for the red team. Chef Ramsay also announces that this is the final night they will be cooking as red team versus blue team. After tonight’s dinner service, 6 chefs will be awarded the black jackets and they will all be on the same team from here on out. The pressure is really on them to perform well! Things get off to a great start in the blue kitchen while Michelle gets off to a rough start on the appetizer station. Back in the blue kitchen, Nick has scorched the salmon and is setting his team back. Michelle has finally delivered on the apps in the red kitchen and things are starting to take off. Chef Ramsay ends up pulling the red team aside and gives them a tongue lashing for screwing up so badly on dinner service. Alison continues messing up on the fish station and Michelle jumps in to try and help her out. Meanwhile, the blue team continues to push forward despite a few

hiccups. The blue team successfully completes dinner service and gets all their tickets completed. Chef Ramsay awards Meghan, Milly and Nick with their black jackets! On the other hand, he is PISSED that the red team is having a complete meltdown in the kitchen and cannot complete tickets to save their lives. T manages to jump in and save the fish station and gets the salmon out to the table that only had half of the meals served.

There are still three black jackets left to be awarded and Chef Ramsay is not pleased with the red team. They are asked to come up with two nominees for elimination. The first nominee is obviously Alison for her completely dreadful performance and the second nominee is Josh for being too frazzled in the kitchen. Chef Ramsay calls Michelle forward to take off her jacket… and put on a black one! He also awards T her black jacket. He calls Alison and Josh forward and he decides to eliminate Alison from the competition. Josh is given the last black jacket. 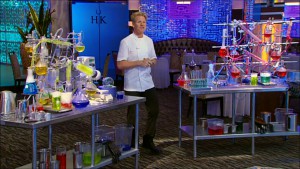 The second hour of Hell’s Kitchen begins with the chef walking downstairs to discover a science lab set up in the kitchen. The mad scientist Chef Ramsay has extracted the flavors of different foods and put them in six test tues for the chefs to guess what the flavor is. Most of them correctly guess what the flavors inside their test tubes are. However, this was far too easy. Obviously it is not their challenge. The challenge is for the chefs to taste it then make it! The three pairs (Josh/Meghan, Nick/Michelle and Milly/T) have to taste Chef Ramsay’s dish and try to replicate it as closely as possible within 30 minutes in order to win the challenge. After tasting all the dishes, Josh and Meghan are eliminated because they used halibut instead of sea bass. The winners of this challenge are Michelle and Nick after they correctly guessed that the broth was soy sauce-based and didn’t contain sake.

It is time for their first dinner service as one team. Things quickly go downhill as Nick serves stone cold lobster and causes Meghan to have to redo her risotto. Meanwhile, Hell’s Kitchen has a very special guest, actress Tatum O’Neal, and Chef Ramsay wants the chefs to perform at their very best. She comes off as a total bitch when the chefs serve her food. She complains about the look of it and calls it mediocre. LOL! Josh is completely frazzled and makes several mistakes including almost burning the kitchen down. Oh, and making noises that make him sound like a “f%$!ing baboon.” Diva bitch Tatum O’Neal sends her beef back for being too rare and not up to her exacting standards. They finally complete dinner service and Ramsay says that they should be proud of it.

Despite the best service of the season, he still needs two nominees for elimination. The first nominee is Josh for being so frazzled and freaking out too easily during dinner services. The second nominee is Michelle for being too slow in the kitchen and making a couple of mistakes. Even though he doesn’t feel like sending anyone home, he still ends up eliminating Josh from the competition.

What did you think of this extra long night of Hell’s Kitchen? Were you shocked at the eliminations? Let me know in the comments below!