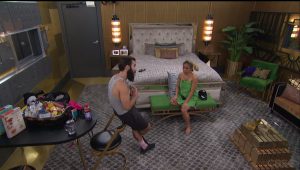 Alex and Paul are keeping their side alliance secret and agree that next 4 targets are Elena, Mark, Matt and Raven. They also reiterate that Kevin is becoming a liability by stirring the pot. They are considering taking him out sooner rather than later because he’s been exhibiting a lot of sketchy behavior. 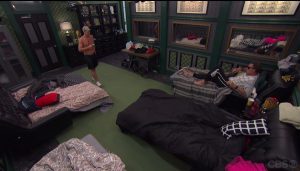 Cody comes to talk to Kevin. He asks what Kevin thinks about when it’s boring like this. Kevin says he thinks about his family and kids every day. Kevin goes to the freezer and sheds a few tears. He says that he learned to hide his emotions growing up and that he couldn’t go home if they saw him crying on TV. “Isn’t that a shame?” he says. 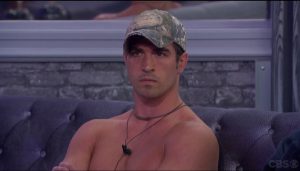 For the veto draw, Mark is selected to play in veto. He says in DR that he wouldn’t use the veto to keep Cody in the house. Cody says in DR that he hopes that he is picked so that he can see all their faces crushed emotionally because it would just be great to see that. Super douche always looks constipated. For the second chip, Alex pulls her own name and selects Paul to play. No one knows that Mark is trying to keep nominations the same to save his boy Cody. Dumb ass, that means your girl Elena is going home. I’m just going to call Mark dumb ass in all future blogs. Cody is furious that he’s not drawn to play. 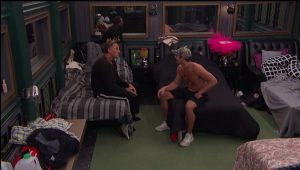 Cody continues talking with Kevin. He tells Kevin that he has a 5-year-old daughter named Paisley. (Everyone questions if this is true when Kevin relays this info to the team. He told Mark she was 3, so everyone really doubts anything that Cody says.) By Cody continuing to talk to Kevin, he is placing a target on him. Kevin’s group has noticed this and has told him to stop repeatedly. 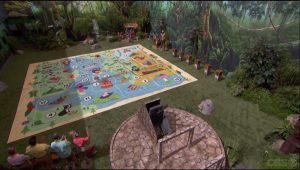 The POV is BB Adventure Tour with Outback Steakhouse as the sponsor. They launch arrows onto a map with the highest score winning the round and the lowest score going out. BB came up with some great locations for the map: Big Meech’s Apple Bobbing and Throwing, Dr. Will’s Botox Boxing Camp, Mike Boogie’s Booger Picking and Boogie Boards, Johnny Mac’s Rapping and Root Canal and many more. Each time someone lands on a place on the map, a sold-out sticker appears on those locations. Paul is the first one out and gets the veto. He knows that he is going to end up with a punishment. Mark is the 2nd one out and gets an all-expenses paid adventure trip to Colorado. He keeps it. In Round 3, Jason thinks there’s no way he’s going out of bounds. Cut to him doing just that and earning 0 points. He opens his box and sees a tandem punishment. He swaps with Paul for the veto. As Josh is describing the punishment, he pronounces it #Tandam repeatedly, leading to everyone laughing. Paul selects Christmas to be attached to him. Matt is next out and opens his box to see the Extreme-otard punishment. He takes the Veto from Jason and gives him the punishment, leading Paul to question what he is thinking. He could’ve taken the vacation from Mark. 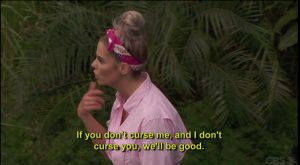 Next, Elena initiates a deal with Alex that neither of them will punish each other. Alex gets $5K and then Elena says that she won. She takes the $5K from Alex and punishes her, despite making a deal in front of the whole house. She could’ve taken the veto. She’s on the block and pisses off the HOH. Alex immediately tells Elena that she’s super salty. Elena was looking over at Cody and he says he is glad he told Elena to take the money because that just might keep him in the game and make Elena the target. 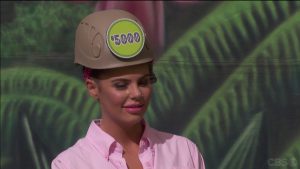 After the comp, Josh says that Elena just showed that she is a greedy liar. Alex says in DR that she’s going to put Cody up because she can’t leave Jason on the block, but he may not be her target after what Elena did. Cody goes to Elena afterwards and tells her she did the right thing. In DR, he is hoping that by doing that, Elena becomes the target this week. To make Elena paranoid, Alex invites Cody to come up to the HOH room to hang out. Cody says in DR that he can’t stand any of these people and talking to them makes a little piece of him dies. 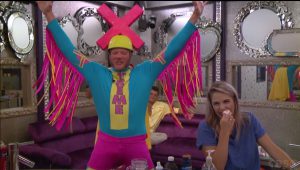 The punishments are rolled out and we get some funny clips from BB. First, Jason comes out in his Extreme-otard and we see him having to yell “I’m so extreme” at all hours of the day and night. He even gets called out brushing his teeth because he is doing extreme cavity fighting and when he goes to the bathroom. He is confused when he is awoken because he is doing extreme dreaming. He jumps up, screams and then yells I’m Extreme and now I’m dizzy. 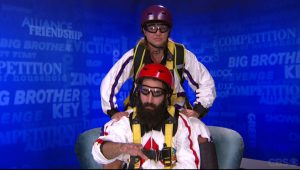 Next, we see #Tandam Paul and Christmas as skydivers that are attached to each other for 48-hours. They are shown having to go to the bathroom together, sleeping together and scooting around the house together. In DR, they tell us that they poo together, shower together, eat together and sleep together. Paul says he’s like Rudolph with Christmas on her slay, except hairier. Much hairier, says Christmas. 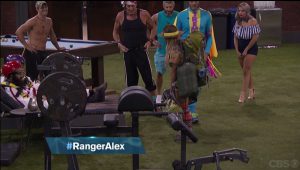 Finally, we see #RangerAlex. She is super salty that Elena cursed her. She has to carry around a bunch of camping equipment, set up a campsite, cook hot dogs for the whole house when a bugle sounds and then break down the campsite. Cody hopes that this will make Elena Alex’s target. As the bugles continue to sound throughout the day and night, Cody takes advantage of the opportunity to talk to Alex, telling her that he would never target her. She tells him that her back is against the wall. 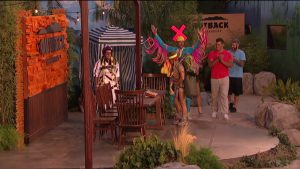 Matt chooses the 6 people to go to the Outback dinner. He chooses the 6 people that participated in veto. Paul forfeits his spot so that Christmas can go in his place. At the Outback dinner, they are served beers, lots of food and all of them make positive comments about the courses they’re served. As it turns out, Elena didn’t eat her meal, but as we saw at the end, she scooped up someone else’s ice cream dessert in her hands. Weird. 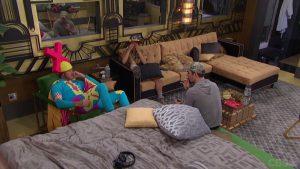 Cody talks to Jason and Alex about teaming up with him. He tells them that they are going to have to alternate HOHs to make it to the end. He tells them that next week, one of them will join him in the jury house and be like, “Fuck, I should have listened to Cody.”

Matt calls everyone to the veto meeting. Jason gets an extreme announcement and yells, “I’m so extreme.” Matt uses the veto on Jason. Alex nominates Cody and says that she washes her hands of this. In DR, Alex says she might just try to send Elena home this week, but let’s face it, Cody is adding nothing to the game. Douchebag.