The time has finally come to find out which Paladin will become the One True Hero! This episode begins with Ansgar leading the Paladins to their final reckoning. Verlox’s men are out on patrol and Ansgar tells the Paladins, Crio, and the Queen to hide while he creates a diversion. Sir Ansgar tells them that no matter what, they need to make it to the Fates. This is noble and all, but I’m not sure why Ansgar couldn’t have hid with them, then waited for Verlox’s men to pass, like they have done in the past. Sir Ansgar fights valiantly while the group escapes, but he is soon surrounded by Verlox’s men. The Queen questions if Crio actually knows the way, and he replies that the Fates will find them. Soon after, they come upon the Fates, who are on an altar in the middle of the forest. The Fates tell the three remaining Paladins that all they have learned will be tested now. Two Paladins will fail, but one will become the One True 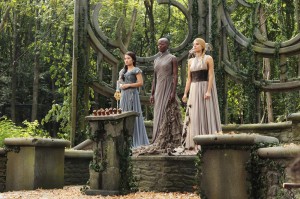 Hero, assemble the Sunspear, and face Verlox. The Fates instruct the Paladins to choose one of the three waiting steeds, follow the markers, and embrace their destiny. The Paladins follow the path to a poem that instructs them to continue on foot and slice through vines with a sword while searching for a scroll containing a map. Shondo finds his scroll first and heads to the next challenge, then Lina finds a scroll. Andrew is still searching when Shondo makes it to the second task, which is to balance a scale using six different items. Lina begins the second challenge when Andrew finds a scroll and runs off into the woods. Lina approaches the task methodically, and finishes while Shondo and Andrew are still trying to balance their scales. Andrew finishes before Shondo, even though Shondo was the first to arrive at this task.

Lina reaches the third challenge, which is to loop chain back and forth through the holes in two doors to trap an ogre. Only two Paladins will be able to continue after this task. Andrew arrives at this task but doesn’t see the chains for the doors, and assumes that he was supposed to pick them up along the way. He goes back to the second task, then returns to the third challenge and finds the chain. Andrew didn’t read the scroll thoroughly , so even though he pulls the chain through the loops before Lina, he did this incorrectly and must start again. Andrew is pulling his chain out of the loops when Shondo arrives. Lina finishes and races off towards the next task, leaving Shondo and Andrew to battle out who will continue in the Quest. The fourth and final task is to hit a bullseye with an arrow across a lake, which will make the bridge descend. Whichever Paladin does this first will become the One True Hero. Andrew finally finishes the third task, and races on to try and catch up with Lina. Shondo returns to the Fates, where he is banished. Andrew says that he has a lot of catching up to do, but he knows that since it is just Lina, he has a good chance because she isn’t that fast. Andrew arrives at the final task, putting the pressure on Lina, and she finally gets a bullseye! Lina crosses the bridge and becomes the One True Hero! Andrew is banished, and he realizes that the hero isn’t just the big guy who can swing an axe, it’s about a lot more than that. He says that Lina deserved to become the One True Hero, since she is always kind and has goodness in her heart.

Lina running victoriously into the Hall of Fates honestly gave me chills. She shows the Fates her piece of the Sunspear and then assembles it. The Fates ask Lina if she will help them and rid Everealm of Verlox. Lina says she will, and wields the Sunspear above her head. As she does, the 11 banished Paladins magically appear to fight beside Lina and help her defeat Verlox. Ansgar runs into the Hall of Fates and shouts, “Paladins!,” but then kneels down and says that he would be honored to fight beside them. Apparently nothing can bring Sir Ansgar down, even though he was surrounded by Verlox’s soldiers. Ansgar and the Paladins return to their hidden shelter, but the Queen and Crio are nowhere to be found. Ansgar says that they can’t travel together any longer; he and the Paladins will distract Verlox’s guards while Lina sneaks into the castle through a tunnel. Lina heads into the tunnel, and Sir Ansgar goes over the plan of attack with the Paladins – they will assess the number of soldiers, attack the guards and then break into the castle, Ansgar will find Lina and lead her to Verlox, and the Paladins will fend off the soldiers. The Paladins and Ansgar manage to incapacitate all of Verlox’s guards on the outside of the castle, and then they push open the gate and fight again in the courtyard. The camera pans to the field outside the castle, where Verlox’s army is assembled, then to Crio and the Queen, who are tied up inside the castle.

As the Paladins continue to battle in the courtyard, Lina finally makes her way to Verlox, Crio, and the Queen. Verlox laughs and says, “I’ve been waiting for you,” in a creepy deep voice. Verlox tells Lina that if she gives him the Sunspear, her friends will live. Crio tells Lina to trust the prophecy and trust herself. Verlox says that the Sunspear completes his victory, and if Lina won’t give it to him, he will take it. Lina tells Verlox that he can try. Lina and Verlox exchange blows while the camera intersperses shots of the Paladins fighting the soldiers. Lina eventually delivers a crippling blow, and Verlox growls as he falls to the ground. The Vizier rushes into the room with his sword drawn, but Ansgar appears and forces the Vizier to drop his sword. Sir Ansgar tells Lina to finish Verlox, and she points the Sunspear at Verlox; the Sunspear glows and drains Verlox of his power until he disappears in a cloud of smoke. The narrator says that Lina sent Verlox back into the shadows. The citizens of Everealm celebrate (with fireworks, which seems a bit out of character for Everealm) that night, and the next day they bid a celebratory farewell to the Paladins. The final scene of this episode is the Vizier in a prison cell having his hands untied. He turns towards his savior and says, “What took you so long?”

That’s the end of this season of the Quest! I am so happy Lina won, I think she really proved herself throughout the Quest. I do wonder where the banished Paladins stayed for the rest of the season; did they live in Everealm somewhere, or where they allowed to return to the real world, only to be brought back for the finale? Also, I’d like to give major props to whoever was behind the costume designing, because Verlox looked inhuman. What did you think of the Quest? Do you think Lina should have won? I’m really glad she did, but I do think the final challenges were a bit skewed so that the men wouldn’t have an upper hand because of their strength. Since most of the tasks this season involved strength, I thought this was a little odd. Do you think ABC will/should renew The Quest for a second season? They definitely left it with a good cliffhanger, since we are now left to wonder who saved the Vizier from imprisonment. Let me know your thoughts in the comments below!