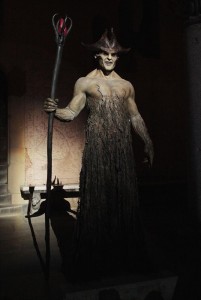 Last week’s episode ended with the Queen announcing that Verlox is in the castle. The beginning of this episode reaffirms her declaration, as we finally see Verlox. He definitely fits the bill of the antagonist, seeing as he literally has darkness encircling his flesh, as well as horns. Verlox touches a pillar and the black vines on his stomach start moving as power transfers from him to the castle wall, creating a fissure all along the side. Crio, Ansgar and the Paladins encircle the Queen and they flee the scene as the two armies fight. As soon as they have fled the castle walls, the Vizier appears. Obviously this is suspicious, and many Paladins say so. The Vizier tells the Queen he is there to help her escape, and gives her a magic pendant that he says will protect her. They decide to spend the night in the shelter of a tunnel, then move again once the sun rises. The Paladins debate what the Vizier’s locket actually does; some think it is a tracker, 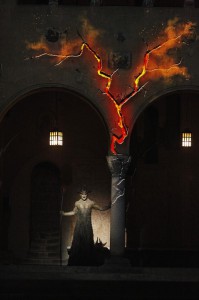 while others think it might influence the Queen’s judgement. In the morning the group heads out, with Sir Ansgar leading them. When the Queen asks where they’re going and Ansgar tells her he is taking them to the front lines, panic sets in. If they go to the front lines, even though that is the safest place for them, it means the Paladin’s quest will be over. Crio faces off against Ansgar, arguing that he has faith in the quest and they need to persevere. Ansgar sees reason, and forms a plan – the Paladins will follow him to some abandoned signal towers nearby where they will alert the front about Verlox’s attack. Ansgar tells the guards to stay with the Queen, set up a camp, and get her a horse. Ansgar promises the Queen they will return by nightfall, and then he and the Paladins run off into the forest. 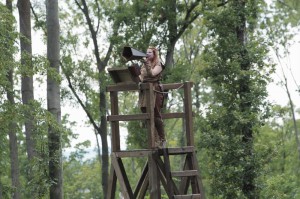 As they are walking through a field, Ansgar suddenly stops and tells the Paladins to kneel down. It’s like he has a sixth sense, because immediately after they hide, scouts from Verlox’s army ride out of the forest. After the scouts leave the field, Ansgar and the Paladins sprint towards the forest for cover. Ansgar tells the Paladins that he has two different messages which need to be delivered to the front. The Paladins will split up into groups of three whose leaders will be determined by who draws the blue arrow and the red arrow from Sir Ansgar’s quiver. Andrew gets the red arrow and chooses Shondo and Patrick, while Lina chooses Leticia and Bonnie. Lina says she wanted an all-girl team because there are three strong guys left, and this could be a way to get one out. To win, a team must use the code keys on the tower to arrange the flags in an exact message, then raise the flag first. Since both teams say that they think the girls have an advantage, I’m going to guess that the guys actually win, shocking everyone. After several false finishes from both teams, the boys eventually win. The boys help the girls with their flags, then Ansgar brings them in the forest and tells the Paladins to build a shelter. After the Paladins have constructed a shelter to Sir Ansgar’s liking, he leads them on a hike through the forest to get the Queen. The Paladins eventually reach the campsite, where they are greeted by Crio, and told to get some rest in their tents. The Paladins are excited that they don’t have to sleep on the ground again, although the girls are nervous about their impending meeting with the Fates. Lina apologizes for picking them and making it girls vs. boys. Leticia says it was their opportunity, but unfortunately it didn’t work out. 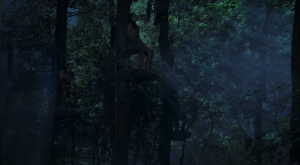 Somehow, the girls seem to blame Bonnie for their loss, since she didn’t help them correctly identify one flag. She told them to find the flag with the pentagon on it, and apparently even though Leticia thought a pentagon has eight sides, it’s Bonnie’s fault for not specifically saying a five sided figure. Although I’ve liked Leticia up until now, it really annoys me that she is casting the blame on Bonnie when she acted as though she knew for sure what a pentagon was, instead of asking Bonnie to clarify. Leticia thinks that if she is in the bottom two with Bonnie, she will win, however if she has to face Lina, she will be banished. At night, Paladins gather around a fire for drinks and discuss Verlox’s invasion. They talk about how sad the Queen was to have to leave her subjects, and whether or not they can trust the Vizier. The Paladins say that they are the only thing stopping Verlox from taking over all of Everealm, since he already has control of 11 out of the 12 kingdoms. Crio brings the Paladins to meet the Fates, then leads Bonnie, Leticia, and Lina to their challenge. The girls must climb to the hunting stands in the trees at the edge of the dark forest to spy on one of Verlox’s patrols. They need to remember what they see, then report it to Sir Ansgar. The Paladin who remembers the most will be spared from judgement. Verlox’s patrol enters the forest, stops to check that everyone is still there, and then leaves again. The Paladins try to remember how many soldiers there were, the number of weapons, and who was in charge. Crio tells them to climb down the trees, and as they start to make their way to Sir Ansgar, Verlox’s men return.

Once the coast is clear, the Paladins and Crio find Sir Ansgar, who asks them to tell him what they saw. Ansgar hands each of the three Paladins a scroll; they must answer as many questions correctly as possible. The Paladins then individually read Sir Ansgar their answers. For the most part, Bonnie’s counts are higher than both Lina and Letica’s counts. The girls return to the Fates, where Crio informs them that Leticia and Lina each had six correct answers, whereas Bonnie had seven correct answers. This means that Bonnie has won the Fates’ challenge, and is safe from banishment this week! I’m very happy about this, because I had a feeling that if Leticia won she would convinced the others that Bonnie was responsible for them loosing the other challenge, which in turn could have convinced them to banish Bonnie. At this point, I’m rooting for Lina over Leticia. The Paladins struggle as they debate who to save, because Leticia is very strong physically, whereas Lina is a sharp mental player. Andrew thinks that Lina would better help him become the One True Hero, because she is bother physical and mental – he thinks Leticia is the weak link. When it comes time to vote, no one stands behind Leticia, so she is banished. Although I’m glad Lina is staying, I do feel bad that Leticia didn’t have anyone vote for her, especially since she voted for Christian so he wouldn’t be totally alone. Leticia refuses to look at anyone except Lina; she says that she hopes Lina becomes the One True Hero.

The Fates tell the Paladins that the end draws near, and the outcome is up to them. The Paladins leave Leticia with the Fates, and return to the campsite. Lina thanks them for saving her, and the Paladins point out that Shondo has never encountered a fates challenge. He says that he hopes he never will, because he prefers to leave his fate in his hands, instead of relying on the other Paladins to save him. Sir Ansgar approaches, followed by the Queen, who remarks sadly that yet another Paladin has fallen. Crio tells her that it is just the way of the prophecy. All of a sudden, a giant roar is heard. The Paladins rush up a hill and gasp as they stare down the other side.

What did you think of this week’s episode? Are you happy that Leticia was banished, or do you think it should have been Lina or Bonnie? What do you think is making such a ferocious noise next to their campsite? You don’t have to wait an entire week to find out, as ABC has yet again premiered two brand new episodes in one night! Let me know which Paladin you think has what it takes to defeat Verlox in the comments below!