Last week’s episode ended with an unknown beast entering the camp, presumably having tracked the Queen via her pendant. This episode begins with the Paladins sitting around the campsite in the morning, so whatever beast visited last night seems to have left as quietly as it came. Minutes after the Queen, Ansgar and Crio join the 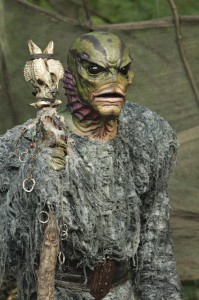 Paladins, they are surrounded by creatures called the Rana. They have the body of a human and the face of a mutant sea creature. Since they are drastically outnumbered, the Queen orders her subjects to do what the Rana say. They are led – as prisoners with their hands tied – to the Rana’s chief, who is conferring with a hooded figure. Andrew asks if they should get down on one knee, and Patrick says that he only kneels for the Queen. The Chief asks why he should help the Queen instead of siding with Verlox, and she responds that one of the Paladins is the One True Hero, the only person who can defeat Verlox. The Chief doesn’t believe that one of the Paladins will be strong enough to defeat Verlox, but Lina steps forward and tells the Chief that one of them will save Sanctum from Verlox. The Chief demands that the other Paladins speak as well, and they do, but the fact that Lina was the first makes her the bravest, in my opinion. The Paladins are awaiting the Chief’s decision when the hooded figure beside the Chief pulls down his hood – it is the Vizi 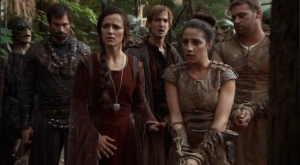 er! Ansgar lunges at the Vizier, but guards restrain him. The Vizier laughs and says that soon Verlox will face the Paladins. The Chief orders his men to lock them up; Ansgar, the Queen, and Crio are put in one cage together, while the Paladins are each in a cage alone. The Paladins shout at the Rana that the Vizier will turn on them as well, but the Rana ignore their pleas and leave.

Sir Ansgar and Crio apologize to the Queen and say that they have failed her. The Queen says that she has already been betrayed once today, and now it seems that her hearing is betraying her. The Queen tells Crio and Ansgar that one of the Paladins is the One True Hero, and that they have traveled from another world to save Everealm. She says that this is a challenge from the Fates, and asks the Paladins if they have given up. The Paladins reply that they haven’t, then look around for possibilities to escape. The Paladins must lasso a wooden pole with a rope, pull themselves to a hanging knife, cut themselves out of the cage, and then free the Queen, Crio, and Sir Ansgar. The first to escape will be safe, and the other three Paladins will face the Fates. Andrew is the first (and only) Paladin able to lasso the wooden post and free himself. He grabs the other knives and hands one 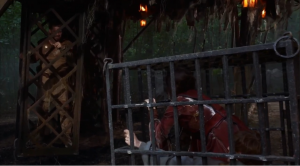 to each Paladin, as well as one to Sir Ansgar. The Paladins run into the forest to hide, and the Queen throws the Vizier’s pendant on the ground. The Rana alerted Verlox’s men, who are now out on horseback searching for the missing prisoners. It’s a good thing the Vizier had the Paladins assemble a hidden shelter, because they are able to hide from Verlox’s men there. Ansgar says that the safest route back to the castle is through the Bog. The Queen starts to object, because the Banshee live in the Bog, but Ansgar says they don’t have a choice anymore. Everyone thanks Andrew for freeing them from the cages, and Sir Ansgar gives Andrew the Mark of Strength.

Once night has fallen, Sir Ansgar deems it safe to travel to the Fates. The Fates 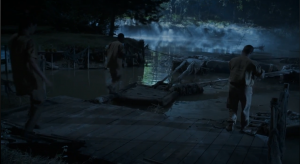 tell the Paladins that today they faced a test of spirit, of believing in the Quest no matter how harsh reality is, and now that spirit will be tested yet again by the Banshee. Crio brings the Paladins through the woods to the Banshee’s bridge. To win this challenge, a Paladin must carry an offering across the makeshift bridge to the Banshee; if they drop any, they will need to restart. On the other side of the bridge, there is a creepy, screaming Banshee, which I’m sure won’t be distracting at all. Shondo and Patrick start out too fast, and constantly fall. Lina is about 3/4 of the way there when she falls and has to swim back to the start. It’s really disappointing to me, because I feel like Lina keeps doing so well in these challenges, up until the very last part. Shondo eventually slows down and manages to bring his offering to the Banshee first. The Banshee keeps screaming and rubbing Shondo’s head while he attempts to show her his offering. Once Shondo has returned to the other side, Crio brings the Paladins back to the Fates. Andrew asks Shondo which Paladin was his biggest competition in the Fates challenge, and Shondo answers Lina. Shondo says Lina was almost there, but Patrick was really struggling. Andrew says that if it was him against Shondo and Patrick in the final three, it would be a very cutthroat competition. Andrew votes for Lina to stay, and Shondo votes for Patrick. Since it is tied, the Fates decree that because Andrew won a Mark today, he will be the deciding vote. Andrew seems to have a tough time choosing, but he eventually stands behind Lina again, meaning Patrick is banished from Everealm. Lina says she thinks Andrew stood behind her because he doesn’t see her as a threat, whereas Patrick would be very tough to beat. Lina says regardless of what Shondo and Andrew think, she is here to become the One True Hero.

With only one episode left of The Quest, who do you think will become the One True Hero? Will it be Shondo, who has only faced the Fates once, and managed to save himself? Or Andrew, who started out strong but unfocused, and has learned that patience is an important virtue? What about Lina, who grew up competing against her three brothers and has proven herself strong both mentally and physically? I think all three Paladins have proved that they belong in Everealm, but I’m rooting for either Lina or Andrew to win. Let me know your predictions in the comments below!