Trending
You are at:Home»BLOGS»UTOPIA»Utopia: The Utopians Move in (Days 1-3)

Note: I’m not recapping Utopia the way others recap well whatever it is they recap. The show goes on for too long (52 weeks 2x a week + 24/7 internet video streams) and candidly, I’m not a transcription service. I’m assuming you watch the show, so my recaps are hitting the highlights of what happened each day quickly to catch you up if you missed a few days. I’ll be writing separate snarky articles about whatever needs that coverage as the mood hits me. (I’m also a little time limited when working on the road and not having access to my DVR)

With that out of the way, let’s talk about the first few days in Utopia and the TV show. 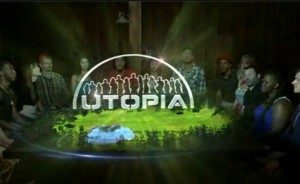 Day 1 – the Utopians walk in, reality TV nerds everywhere squeel in joy as for the first time on a reality show, the internet video streams start up 9 days before the first show airs on tv. I have full coverage on the first night in this blog entry, but we learn some things from the TV show as well. For TV drama reasons, after walking into the farm & barn, the “pioneers” (the first 14 people to star in the show) sit around a table in the barn and listen while the TV viewers watch a very fake hologram float around explaining the rules (there aren’t any – except that there are – more on that later) 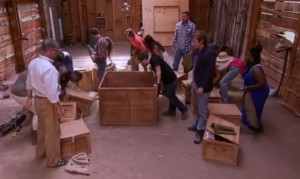 After the video, as a team building exercise, or for tv drama, the utopians have to put most of the stuff they brought with them in little personal crates in a single large storage crate, whatever doesn’t fit, doesn’t stay in Utopia. Bella immediately proves she’s a nut, and Josh the contractor cuts her off ’cause nobody got time for that. Dave stands off to the side not doing anything then throws a fit demanding that every last thing he brought has to be in the crate.

Josh and Red search the property to discover what water and electricity they have. None. It stops at the front gate, they have to run pipes and wires up to the barn themselves.

The rest of the afternoon and night progresses as documented here. (it was a wild ride to watch “live” on the internet!) 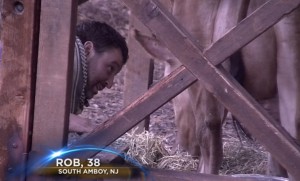 Day 2 – Everyone settles into the daily routine of being on a farm, including milking the cows. Hex is dehydrated sick from all the drinking the previous night. She gets hauled off to the hospital, but returns a few hours later. There is a heated house meeting but ultimately they decide to keep Josh, provided he doesn’t drink again. The guys start at the front gate digging a ditch to bring electric back to the barn. Bella has a self pity party/melt down. She does this a lot (like every day hereafter) Amanda owns up to being pregnant. (due in November) Pastor Jon comes out against public displays of nudity. 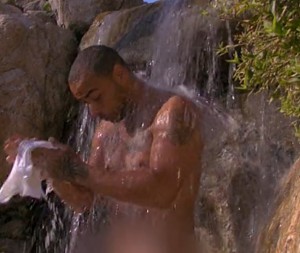 Day 3 – Dave’s 32 Birthday is celebrated by a very nude, very public shower in the lake waterfall. Work continues on the electric project. First Sunday service with Pastor Jon, about 1/2 the Utopians attended. The boys get a gas powered water pump running (not shown on TV) and then never touch it again. Bella discovers a dead chicken which Hex, Red & Dave want to cook and eat, but Aaron doesn’t. This sets Red off on a wild tirade, including wasting some of the water in the water tank for the cow pens. (#watergate!) The day goes on and Red decides he’s cooking up his share of the dead chicken and to hell with everybody else. This causes an in your face screaming match with Aaron. (Mike and Josh stood off to the side cleaning their nails while this was going on, lol) Thereafter Red decides to quit Utopia. (Note: anytime you watch the feeds and see Red do this it’s just a ploy to get his way.) 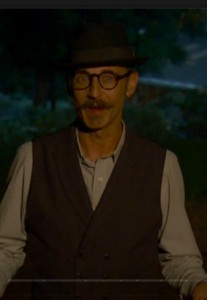 More recap in the next post. I also have two opinion blogs coming up, one about ways to watch Utopia, and another about the strategy behind utopia.

His identity is a secret ... but his snark isn't! When not dodging the peeler or becoming twice baked this spud is known on twitter for his sharp whit! He will be blogging the Fox hit Utopia for us all season long. So check out his blogs and follow him on social media with the links below.