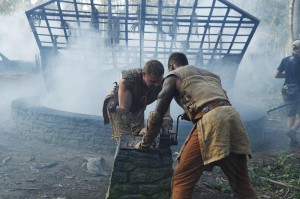 The end of the previous episode left us wondering what beast is near the campground – could it be something sent by Verlox? The title of this episode, The Dragon’s Lair, basically gave this surprise away. As the Paladins, the Queen, and Sir Ansgar reach the top of the hill, they see a dragon flying through the air and breathing fire on a nearby town. The Queen says that the dragon is destroying an outpost, and they must go help. Sir Ansgar cautions the Queen that it isn’t safe for her to investigate, but she insists on being a part of the group that travels to the outpost. Bonnie says that they marched behind the Queen all night long. Eventually, they reach the site of the dragon’s attack. The outpost is scorched, nothing but ruins left from the dragon’s attack. Only two villagers remain; one is injured, and the Paladins help her while the other explains that Verlox unleashed a dragon from its lair. He says that the dragon returned to its lair this morning, and the Queen announces that they must trap the dragon in its lair again.  The Paladin’s task is to reassemble the pieces of the gates to the dragon’s lair, then close it before nightfall, since the dragon sleeps during the day. To do this, they must search through the trees for burlap sacks containing pieces of gears, reassemble the gears, then attach the gears onto their gate in the correct order and wind it shut. Shondo, Andrew, and Patrick are competing for first place, while Lina seems to be missing a gear, and Bonnie can’t properly assemble her gears together. Andrew finishes first, with Shondo closing his gate just seconds afterwards. Ansgar tells Shondo and Andrew to help the others, so Shondo goes to Patrick and Andrew helps Lina. Andrew points out that Lina doesn’t have all of the gears, so she runs to grab the second bag. Ansgar instructs Andrew to help Bonnie, and together the Paladins close all of the gates. Andrew says that needing help isn’t a characteristic of the One True Hero, who needs to be able to get things done by himself.

Crio runs to the dragon’s lair and informs them that the Queen is safe in her camp, however he doesn’t feel safe here. They laugh and head off into the woods as the dragon awakens. The Paladins return to the campsite, where Ansgar tells them to camouflage the tents with branches and vines so that Verlox’s men can’t easily find it. As they sit around the campfire at night, the Paladins once again discuss their distrust of the Vizier. Ansgar and Crio join them, and the Paladins tell them their concerns about the Vizier. The Queen arrives on horseback, and informs them that her men discovered dragon eggs. Crio says that the Fates will know what to do, so he leads the group to the Fates. This is the first time the Queen and Sir Ansgar have been in the hall of the Fates, and they are appropriately in awe as they take in not only the Fates, but the floating holograms of the banished Paladins. Bonnie says that either she or Patrick has to win the Fates challenge, so that one is guaranteed to continue on in the Quest. The Fates tell the Paladins that today they faced a great evil and thwarted it, but sometimes it is better to stop evil before it grows.

Crio leads Bonnie, Patrick, and Lina to a field in the forest, with Sir Ansgar and the Queen following. There are three holes containing one dragon egg each, and it is up to the Paladins to use the tools provided – a metal cage and planks of wood – to bring the egg to the surface. The egg will burn their skin, so they cannot touch it. After they have the egg on the ground, they must be the first to wrap it in a net in order to win the challenge. It’s a tossup  between Lina and Patrick, while Bonnie is struggling with the weight of the egg. I have a feeling Bonnie will be banished tonight, regardless of whether Lina or Patrick win this challenge. Lina is almost finished when she drops her egg back down to the bottom of the hole, 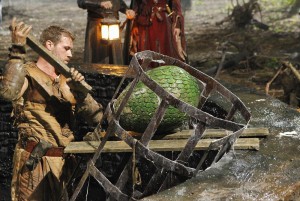 however her resolve to finish the task no matter what is admirable. Patrick frees his egg from the metal cage and wraps it in the net, ensuring his safety this week. Bonnie is halfway when her egg falls, and Patrick jumps in the hole to help her complete the task. With Patrick’s help, Bonnie manages to finish the task seconds before Lina. Lina thinks that the Paladins will save Bonnie, but I’m hoping they will recognize that Lina did the task much faster and without help. Bonnie says that she may not have the physical skills, but she has the heart of a hero. This is true, but the One True Hero needs to be strong enough to defeat Verlox, not just have a big heart. 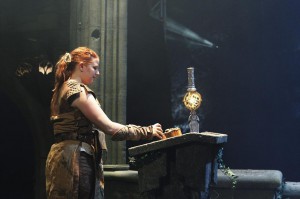 Shondo and Andrew ask Patrick what happened in the challenge, and he lies to protect Bonnie. He says that Lina had her egg halfway up, but Bonnie would have finished second if her egg hadn’t fallen. Patrick knows that Lina was almost at the top when her egg fell, and that she still managed to finish practically simultaneously with Bonnie even though he was helping her. I think it was wrong of Patrick to mislead Shondo and Andrew, regardless of his feelings towards Bonnie. The Paladins need to be strong – both mentally and physically – and although Bonnie generally excels at mental tasks, she can’t compare to Lina when it comes to physical challenges. Shondo and Andrew vote to keep Lina, meaning that justice prevailed, despite Patrick’s lie! I really do like Bonnie, and I’m sad Bonnie was banished tonight, but it was her time to go. Bonnie tells Patrick to win for her, and Lina says she is shocked that they chose her over Bonnie. The Paladins leave Bonnie with the Fates and return to 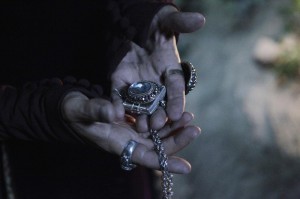 the campsite, where they gather around a campfire with Sir Ansgar, Crio, and the Queen. The Queen lends Lina her cape for warmth, which touches her. The Queen says she really wanted Bonnie to sing her song about Everealm again tonight, and asks the Paladins if they remember the words. Patrick says they wouldn’t do the song justice, and Ansgar says it will be sung for hundreds of years. Everyone goes to bed except Crio, who takes the first watch. He eventually falls asleep while on duty, and the camera shows a green light emanating from the pendant that the Vizier gave the Queen. A green haze covers the camera, flickering in and out, as if some beast has followed the pendant to the Queen.

Well, that was certainly an exciting episode! I love how the challenges are incorporated into actually saving Everealm. What did you think about Bonnie being banished, and Patrick misleading Shondo and Andrew in the hopes of saving her? Do you think Patrick was right to do so, since he was so close with Bonnie? Do you think the Vizier is evil, or that he is actually protecting the Queen? With only two episodes left of this season, the choice for the One True Hero is narrowing. Who do you want to become the One True Hero? Let me know in the comment section below!