I’m back from vacation and excited to discuss all the twists and turns of this week’s episode! The Paladins are called in for a meeting with Queen Ralia. She says that all of their hopes rest on the Paladins’ shoulders, and the Paladins look pleased at this. The Queen says they are to be treated not just as warriors, but as honored guests. Jim says that this

gives them hope, because the Queen is one of their few supporters, and it’s reassuring to know that she wants them there. A soldier bursts into the room and Sir Ansgar demands that the Queen is taken to safety. She leaves the room, and the soldier says that he has failed them. He says,” The front lines will fall in a few days time. Nothing can stop Verlox the darkness, Verlox, he’s…,” then the man collapses. Sir Ansgar commands the Paladins to take the fallen soldier to the healer, then tells them that the soldier road for 3 days to reach them, but collapsed before he could relay his message. Sir Ansgar asks the Paladins what they would do for their kingdom, and they respond, “Whatever it takes.”

The Paladins are taken to the training fields to learn to ride horses. Jim says that the Paladins are constantly aware of their Sunspear pieces, and they often yell “Spear check!” to         make sure the pieces are accounted for. While riding her horse, Leticia notices that her  Sunspear  is missing. Jasmine is worried that if Leticia doesn’t find her Sunspear, the fates     will think it is disrespectful and banish her. After some searching, the Paladins dismount and       return to Sir Ansgar, who has the missing Sunspear piece. Once Leticia confesses that she lost her Sunspear, Ansgar yells at her in front of her fellow Paladins and the Queen. Although she is reprimanded, Leticia stands her ground which convinces Ansgar that she has learned from her mistake. He returns the Sunspear to Leticia. Ansgar informs the Paladins that they will test everything they have learned in a military exercise. They will mount their steeds and proceed through the gauntlet, which consists of archery, spear throwing, jousting, and war hammer (which means smashing a ceramic skull with a hammer while riding a horse). They will try to score as many points as possible, and the three Paladins with the lowest score will face the Fates. The Queen is watching, and Ansgar tells the Paladins to make the Queen proud. 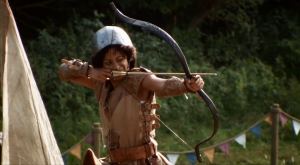 The Queen and Ansgar are impressed by Jasmine’s riding abilities. Ansgar asked Jasmine where she learned all these talents, and she answers, “My imagination.” Jasmine earns 91 points. Ashley, who is a horse trainer, fails at the archery and jousting tasks and only earns 32 points. While Leticia is completing her tasks, Ansgar yells at her to move faster. After she finishes, Ansgar tells Leticia that if they needed to find a new name for slow, it would be her name. Nonetheless, Leticia scored 83 points, so slow and steady worked for her. Adria barely grazes the skull in the final task, and scores 56 points. Lina earns 80 points. Even though he completely misses the skull, Patrick gets 86 points. Jim misses the skull as well, and gets 35 points. Andrew earns 91 points, and is told to go show some respect to the Queen. He bows before her, and she tells him well done, he should be proud. Immediately afterwards, Andrew worries that his calling the Queen “My Lady” will hurt him later on, because he didn’t address her properly. The Queen asks if anyone hear Andrew call her “Lady”, but doesn’t seem too upset about it. Bonnie isn’t doing too well, and all of a sudden her horse erupts into a full on sprint away from the challenges. She handles it well, and goes back to smash the skull, earning her 40 points. Shondo blows everyone else out of the water with a score of 183 points! When Christian is riding, the the Vizier asks if the horse is riding the woman or the woman is riding the horse, and the Queen responds that it isn’t a woman, it’s Christian. Christian earns 30 points, and Lina says he was too confident, which was what hurt him.

Surprise surprise, Shondo wins, and earns the mark of dexterity. Which he definitely deserved, but his attitude made me dislike him a bit. First Shondo said he was only competing against himself, because when he’s in the zone no one can beat him. Then, when Ansgar announced that he won, Shondo says that all he sees is being One True Hero, all he sees is coming out on top, if it’s the way of the Gods. The way he said this and his arrogant grin makes me hope that a Paladin beats him next episode and takes him down a peg or two. Jim, Ashley and Christian have the lowest scores and will have to face the Fates. The Paladins gather in different rooms to digest what happened earlier and to comfort those who might be banished. Jasmine and Leticia tell Jim to stop thinking negative thoughts. Christian joins them, and Jasmine says (in her confessional) that she thinks Christian is more scheming than he looks, and he is in his element. In his confessional, Christian says that the Sunspear is made for one, and he believes that he is that one.

The Paladins are called into the Hall of Fates, and Ashley says she has a bad gut feeling because Christian and Jim have strong friendships with so many people in the castle. Jim looks up as he goes into the Hall of Fates, and sees Katie’s face floating creepily in the rafters. Jim says this makes him nervous, because it could be his face up there next. Crio tells the 3 Paladins that they failed today because they lacked focus and accuracy, therefore they must try again. There are five horseshoes inside the blacksmith’s fire, and the Paladins must take each horseshoe out, hammer the lead from the horse, cool it in the water, and secure it properly on the wheel with six nails. The first Paladin to correctly mount the most horseshoes is safe from banishment,

and the other two must face judgement from the other Paladins. Jim and Ashley are pretty much neck in neck, but Christian is visibly flustered and sloppily completing the tasks. Jim finishes first, then Ashley and Christian finish in what seems to be within seconds of each other. The Paladins must now choose between saving Ashley or Christian. They recognize that Christian got very careless under pressure during the last challenge, and that Ashley’s riding abilities could come in handy because she offers them advice. Shondo says that Ashley shines at the things she is good at, but Christian doesn’t do well in the things he claims to be good at. Shondo, Adria, Leticia and Patrick voted to keep Ashely. Jim, Lina, Bonnie,  Jasmine and Andrew voted for Christian. The other Paladins were told to leave Ashley with the Fates, where she returned her piece of Sunspear and was banished.

Back in the castle, the Paladins are in their rooms discussing the competition. Shondo says no one appreciates being there more than Jim. Andrew says that if Christian ends up in judgement again, he will be banished. Christian says he feels like everyone hates him, and Andrew says that if that was true, he would be banished right now. Bonnie thinks Ashley didn’t deserve to go home, but she believes that Christian has the greatest skill set level, and that’s why she stood behind him. The Paladins are called outside for a feast, and partway through, the Queen joins them. The Queen talks about her childhood, specifically playing around the castle with her brother. She tells the Paladins that her brother died of the Plague when he was 10. The Vizier joins them, and the Queen toasts the Paladins’ selfless dedication. The Vizier begins to talk to the Paladins when the Queen starts coughing and grabbing her throat. The Vizier announces that the Queen has been poisoned, and Crio runs for help.