We are almost at the half way point of the race now and everyone is on their way out of the Yukon to Winnipeg, Manitoba, the dead center of Canada. For the first time this race Olympians Natalie and Meaghan don’t start first! Audrey and Alain led all our racers to the airport where they all board the same flight to The Peg via Vancouver. Once there they all make their way to the provincial legislature to find the golden boy. They all get there to realized that the legislature doesn’t open til 6am and their clue is locked inside so they wait. In the morning they find out they are making their way to the Royal Canadian mint. 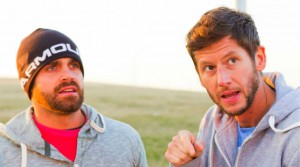 Everyone must make their way to the engraving room and receive a box of 10 international coins. Once they get their coins they make their way outside to match the coins with the countries flags. Finally a task I can do! Rex and Bob arrive first, and Sukhi and Jinder after hiring THE WORST cabbie in Winnipeg arrive last. He took them on a scenic tour of Winnipeg to get their. I’d be LIVID. This challenge doesn’t seem too hard looking at it, what makes it difficult is if you get it wrong, you have to take all your coins back and start over so it’s actually just difficult to figure out where you messed up without a visual reference. The Olympians leave first and have a nice comfortable lead until they meet the longest train in the world. They were stuck at a railroad crossing for what seemed like forever. I’d be losing my mind in that cab. Despite their last place arrival, Sukhi and Jinder’s international travel background came in handy and they were second to leave this challenge. These two are coming back strong. It’s great to see them succeeding after their meltdowns in China. Poor Mickey and Pete and Rob and Ryan had a difficult time with this and Ryan and Rob were the last team to leave the mint.  This is a challenge that needs a lot of mental strength, a lot of memorizing. Would you have been able to complete it? 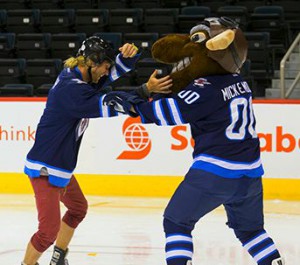 Our teams leave the mint and travel by cab to the famous intersection of Portage and Main, know for being the windiest intersection. Teams receive their Detour clue here. They are also given a Fast Forward Option. In the roadblock teams must choose from Puck It or Pinch It.  This wouldn’t be Amazing Race Canada if there wasn’t a hockey challenge. In Puck It you must stick handle a puck through some pylons and  score 5  goals in different areas of the net.  In Pinch it you must travel to a Ukranian Orthodox Cathedral and prepare 74 perfectly pinched Pierogies.  Natalie and Meaghan don’t even look at the fast forward. Why would they? There is a hockey challenge and they are Olympic Hockey Players, off to Puck it they go. Sukhi and Jinder and Alain and Audrey decided that Natalie and Meaghan would have tried the fast forward so they aren’t going to waste their time.  Once at the MTS Center Audrey sees the girls’ jersey’s missing and grabs Alain. They decide that there is no way they can complete this before Natalie and Meaghan so off to the fast forward they go. Mickey and Pete and Michel and Pierre choose hockey as well. Only Rex and Bob and Ryan and Rob head over to make pierogies with the ladies. Alain and Audrey are searching the historic Exchange District if Winnipeg for Vintage painted Billboards. They need to find 7 specific billboards and fill in the missing words  on the sheet they were given and everyone else is watching Natalie and Meaghan miss the 5 hole shot over and over and over again. Sukhi and Jinder are getting a great kick out of 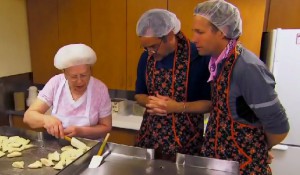 watching them struggle. Then Michel and Pierre do their first shot and sink it right in the 5-hole. I thought Natalie was going to kill them. Pierre and Michel are the first out of the challenge and even Mickey and Pete beat the Olympians! Sukhi and Jinder were the last to leave the Puck It challenge. Meanwhile the boys are having a grand old time with the little old ladies over at the church. Both teams are having a great time hanging with the gals having a little chin wag. I think at some point Rex and Bob forget they were racing. They were hilarious here the ladies were cracking up listening to them chatter on and on. Rex and Bob were out first leaving behind Ryan and Rob. Did you think the Puck It challenge was fair to the rest of the racers? I know I’d feel pretty defeated knowing Olympians were doing this challenge BUT they sucked so bad at the 5-hole it makes up for it. What challenge would you have done? I know I’d have been making pierogies because I can’t play hockey to save my life! The mascot Mick E Moose was the highlight of this for me. He was hilarious watching Sukhi flail around on her skates. But hey! For a girl who never skated or played hockey she got the job done! Those two are ones to watch.

After completing their detour everyone is on the way to the Road Block where they must decided who on their team has performance issues. Teams are on their way to Whiskey Dix Nightclub and Bar where one team member must dress like a rock star and memorize and perform a Rock and Roll song to please the crowd. Once the judge has approved of their performance they will get their next clue. Michel, Natalie, Mickey, Jinder, Rex and Rob are the ones doing this challenge. Alain and Audrey are still wandering out finding their billboards. Michel decided he can’t do this challenge. English isn’t his first language and the song is too hard to 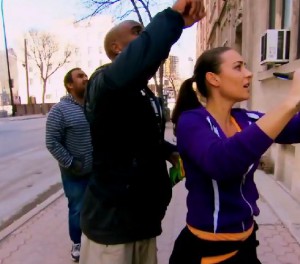 learn so they hand in their express pass. OMG the costumes. I was dying! Natalie looks like something out of a bad 80’s aerobics video, Jinder looked AMAZING, Mickey was a hot mess. Then there was Rex. Oh Rex, as a gay man, I thought  this is where you’d excel but no! Fish net top, leather pants, and bad wig. Amazing, just amazing. Rob was pretty cool in his bright pink wig. After a few tries everyone seemed to get their song and go. Mickey and Pete were the first out after Pierre and Michel with the express pass. Rex was last to leave, he had such a hard time and wasn’t feeling to great but he took a page out of Nicole’s book and never gave up! Alain and Audrey finished their fast forward as these teams were finishing their rock star challenge. Is it enough to get them to first?

All teams are on the way to the pit stop now. Pierre and Michel log their first, first place finish winning themselves an all-inclusive trip to Las Cabos Mexico and  three thousand dollars.  In a foot race with them was Alain and Audrey coming in second. Mickey and Pete got their first third place finish and Sukhi and Jinder followed in forth. Natalie and Meaghan have fallen right off the podium to fifth place. A spot I am sure they ARE NOT used to being in. Ryan and Rob squeak in sixth. Poor Rex and Bob are last on the mat. Leaving the roadblock Rex and Bob were pretty sure they were in third.

On their way into the bar they say Natalie and Meaghan leaving and Rob and Ryan left before them so they assumed all the other teams were at the Detour still. The shock on their faces was priceless and heartbreaking at the same time when Jon told Rex and Bob they were last and ultimately eliminated from the race. Check out their full reaction to being eliminated with this extended mat interview with Jon Montgomery. http://www.ctv.ca/TheAmazingRaceCanada/video.aspx?vid=415561 These two have an amazing attitude about everything and they are SO funny.

We are going international again next week!  I am so excited that we are off to Normandy, France. Will our francophone racers have an advantage here? Probably! The express pass is no longer an issue for both teams now so the race is really on. No one has an advantage anymore. I can’t wait for next week. This race gets better and better every week, but I will say there will be something missing without Rex and Bob’s sense of humor and spirit. Comment below and let me know what you think of the season so far!