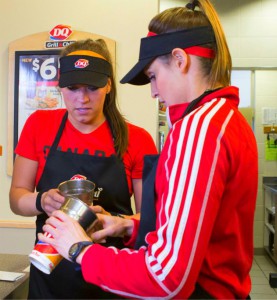 It’s the semi finals and I am excited and sad all at the same time. I can’t wait to see who wins but I never want this race to end. It’s been a while since I’ve felt like that about a reality show. It’s time to say good-bye to PEI and our final four are driving across Confederation Bridge to Shediak New Brunswick. Once there they need to crash and Acadian birthday party at Dairy Queen (yes I know shameless product promotion) and prepare Blizzards and a birthday cake for a family of 4. Once done they get their next clue. If you have been to Canada and never had a blizzard you are missing out. These things are DELICIOUS. For my American friends it’s basically soft serve ice cream with pieces of whatever you want mixed in. Think McFlurry from McDonalds! That is where they got the idea! No one had trouble with this challenge except for maybe Sukhi and Jinder, who ran a red light on the way and have to sit on the side of the road for 15 minutes. Amazing Race Canada don’t screw around y’all. Break a rule and you get punished! Now this is a challenge I could do! Make some ice cream….SURE My pleasure. Why couldn’t the whole race be like this? I’d dominate!

Natalie and Meaghan are first out thanks to Sukhi and Jinder giving up their lead. Once out of this challenge they are all on the way to Hopewell Cape and they need to search the Albert County Museum for their next clue.  The clue happens to be the Detour and they get to choose from BY LAND or BY SEA. In By Land they need to Geo Cache and find 10 hidden Geo Cache’s to get their next clue. If any of you watched Real Housewives of New York this 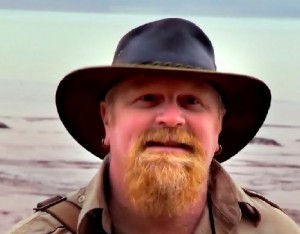 season you know that could take hours and you could possible hate your team-mate by the end of it. In By Sea they need to locate the Hopewell Rocks and using signal flags properly display the messages given. First let me say that the Hopewell Rocks ARE AMAZING! When the tide is out these rocks look like statues and you are actually walking along the ocean floor, then the tide comes in and these rocks are almost completely covered. If you haven’t been there and you are in Eastern Canada you NEED to go there. Natalie and Meaghan are first there. They open their box of flags on the cover is taped the messages they need to learn, they then have to run over to  book that tells them in what order to put the flags. First the girls can’t figure out where the messages where! The challenge judge was priceless. Kevin Strain was his name and he made this episode for me. The looks this guy was throwing were THE BEST! 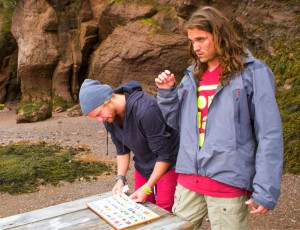 Finally they figure it out and start memorizing. Sukhi and Jinder are having a bad day and get lost on the way. They all arrive and get working on it. First the hard part was trying to figure out how Kevin was reading the flags. Sukhi and Jinder lose their clue somewhere on the run from the clue box to the rocks. That is devastating news at this point in the game. They ask Mickey and Pete who lie and say they don’t know where theirs is either. Rob and Ryan just flat-out refuse. They got U-Turned by them and they aren’t forgetting it. They finally go to Natalie and Meaghan who if you remember they tried to point in the wrong direction. They wrestle with the decision and decide to be good sports and allow them to look at the clue. Would you have been as forgiving as the Olympians? I’m not sure I would be, I think I’d be in front of the bitter bus with Ryan and Rob. Everyone is being denied the next clue and they can’t figure it out. I am sure Kevin is taking great delight in telling everyone it’s wrong. Those Ginger’s are sketchy and need to be watched!  After the 11th deny Natalie and Meaghan decide to switch tasks, but while searching for their clue in the flag box they come across a flag that looks really similar to one they already have but just slightly different. The light bulb goes on and realize they had the wrong flag, pull it all down and put the right one up. Finally Kevin gives them the clue. Mickey and Pete figure out their mistake and too and are out very close behind the girls. Before they leave they give a hint to Ryan and Rob……..Check your flags. Last to finally leave the road block are Sukhi and Jinder. Both these roadblocks are difficult but after watching the RHONY Geo Cache I’d be doing flags. Which one would you have chosen?

Following the Detour everyone is making their way to Cape Enrage. They need to decide who wants to Rage Against the Cape. In this challenge they need to repel down one side of the cliff wall down to the ocean floor grabbing half of their clue along the way. Once down they need to run down the beach and climb up the cliff to get their second half. Natalie seemed to have conquered her fear of heights sky diving and was down without much incident. Meaghan was just glad Natalie had to do it because if she had to her injured hand wouldn’t have been too happy. This seemed right up Mickey’s alley and he was bouncing down that cliff like he was strolling in the park, making up some time. Ryan and Sukhi aren’t far behind and are pretty close to each other, it looked like Sukhi

was going to over take Ryan who had a bit of trouble figuring out you don’t climb the rope up the cliff you just climb the rocks. Sukhi seemed to have lost her strength and had a hard time getting up and Ryan managed to get up first. Jinder being the amazing brother he is was still encouraging her, not letting on the Ryan was done because he didn’t want to discourage her. Sukhi managed to muster up enough girl power and got up the cliff. Following the cliff climbing they make their way down a path to a zip line where one person has to secure the other into a safety harness. When the safety instructors determines they are harnessed correctly they get to zip line down  and run to the Cape Enrage Lighthouse to the pit stop.

Natalie and Meaghan lost a bit of time here when they had trouble getting harnessed. They managed to zip line down to Jon. The Olympians are first AGAIN. This time they have won a trip for two anywhere in the United States and another 5000. Even if they don’t win the race they have still won a huge amount of money for all their first place finishes. Mickey

and Pete have a strong second place finish and Ryan and Rob  squeak in third. Unfortunately there is no second NEL for the dynamic brother and sister duo of Sukhi and Jinder and their time in the race has come to an end. I don’t think this is the last we’ll see of these two. I see great things happening for them outside this race. I loved watching them. It was really a tough leg for me to watch because  I love Sukhi and Jinder but I also love Ryan and Rob. It really was a case of trying to decide what kid I love more. You just can’t do it. So I’m said to say bye for now to Sukhi and Jinder, but so very happy to see Rob and Ryan continue on in the race.

Next week is our Finale and our racers head to the nation’s capital. Let’s break down our top three:

Natalie and Meaghan – Forces to be reckoned with. These Olympians have won more than half the legs of this race, winning the first 5 back to back. They have proven themselves to be physical powerhouses (We’d be disappointed if they weren’t) and extremely strong mental competitors. Their worst place finish was 5th a few legs ago and they have proven they can fight their way back to the top.

Mickey and Pete – Cool and calm the whole race. I haven’t seen a more mellow team make it so far. They have finished top three on the last 7 legs of the race and have never won a leg. The Beakman boys have proved to us that it’s only the last leg that counts though. Mickey and Pete were one of my picks to win pre season and I’m not giving up on that yet!

Ryan and Rob – They have had nine lives in this game. Benefited from 2 NEL and managed to make it through their speed bumps and a u-turn. When these guys have a good leg they have a good leg but if something goes wrong it goes drastically wrong and we have no life lines left. These happy-go-lucky boys are a long shot but one I’m willing to bet on.

I believe that Natalie and Meaghan will most likely take home the grand prize. They are just so strong and part of me really wants to see an all female team take it all. They are by far the strongest female duo we have seen on any season of Amazing Race Canada or US. I know this sounds wishy-washy but I really am good with any of these top three winning. They are all great players and have proved themselves to be amazing competitors. Who would like to see take  the win?

Remember the Finale airs Sunday night at 8pm. It’s a two-hour event with a live reunion show this year. I am so excited and can’t wait to see who wins!

Amazing Race Canada 2: How Are We Going to Explain This to Mom & Dad