We are nearing the end of this season of TAR Canada. It’s final five and we are leaving Montreal and on our way to Canada’s east coast to beautiful Charlottetown Prince Edward Island. The birth place of Canada. Fellow YRR Blogger T 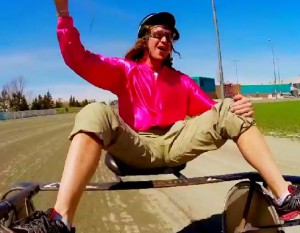 VTater would be amazed and horrified on this leg of the race. All these amazing relatives around him but PEI is known for eating their Taters, so I think he’d run for the hills. All the teams meet up at the airport and all are shocked to see Ryan and Rob walk up to them. These guys are like cats! They have nine lives in this race. I’m not complaining though. I love who these guys keep hanging on and the shock of all the racers who count them out! Everyone is on the same flight to Charlottetown. Once they get there they need to find their cars and make their way to Red Shores Race Track to find their next clue! All teams arrive and find they must take part in a PEI past time of harness racing, only there are no horses. One team member becomes the horse is strapped to the cart and must pull the other for two laps around the course to get the next clue. I would have KILLED to see Rex and Bob do this challenge. I can just imagine the hilarious things that would come out of their mouth. I am sure For the Love of Cher would be screamed more than once. Natalie and Meaghan are in the lead. Mickey and Pete show these boys have a few tricks up their sleeve.  Mickey our blonde stallion just flew out of no where and over takes the Olympians. The looks on everyone’s faces was definitely WTF!? Turns outs Mickey was a track star in school! Alain is struggling but Jinder is really struggling as well. Mickey and Pete leave the challenge first followed closely by the girls. I seriously thought Jinder was going to need a medic. He was not looking great, but Sukhi the slave driver wasn’t going to let him quit and they fell to fourth place. Alain and Audrey leave this challenge in last place! This is hard y’all, those tracks are huge and I was honestly concerned for poor Jinder’s health for a bit there. How do you think you would have done pulling someone around a racetrack?

Once done there they are on the way to the roadblock. The make their way to the National Historic Site of Province House, the birth place of Confederation. In the challenge Who’s your Daddy? One member must  walk around the grounds and talk to the family/friends of the delegates of Confederation. When asked they will tell you which founding father they are associated with and some identifying information. They then need to enter the house and correctly identify them all. Here is where if the heights haven’t killed me, the swimming hasn’t drowned me or eating nasty food hasn’t gotten me eliminated I would lose the race. I would not have the memory to complete this task what so ever. Who didn’t have a problem with this task? Sukhi! For a team that had such issues at the start of the race, they have really come into their own and watching Sukhi memorize these people was amazing! She was in and out with all the teams shaking their heads. Poor Pete walks into the room after memorizing all his people and realized he didn’t ask who the delegate was but who they were so all he had memorized were women’s names and out he goes to try again. Ryan kicked some ass in this challenge as well and was out second. Thankfully he mastered this because they do have that speed bump ahead of them! Pete after memorizing the guys leaves first. Natalie and Meaghan had the hardest time on this challenge. It’s probably the one that stumped them the most and for the first time in this race they found themselves in last place. Meaghan realized finally that she was actually just mispronouncing a mans name. Instead of Tupper she was calling him Tapper and the Olympians are off to make up some time. 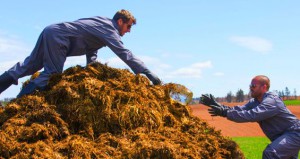 After this teams need to gas up their cars at a specific Petro Canada station. Yes product placement is huge in this series. From the American Express MasterCard to Petro Canada gas ups, but hey the winner receives free gas for life so I think they deserve it! After gassing up they need to make their way to Lucy Maud Montgomery’s birthplace. What Canadian little girl hasn’t read Anne of Green Gables. I would love to have been able to go there and see this place! Everyone is now off the detour. Teams get to choose from to Island specialities. Mass or Mussels. All expect Ryan and Rob who first have to complete their speed bump. These guys need to dig through a huge pile of steaming manure and look 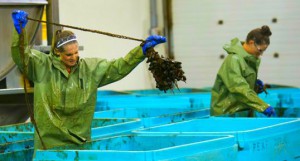 for 3 large bottles of moonshine with their bare hands before they can carry on to the detour. I really don’t want to be Jon at the end of this race. Check out Ryan and Rob doing some funny imitations of the cast doing their stinky speed bump. In Mass teams must accurately calculate the weight of 10 million potatoes. (Don’t worry TV Tater no potatoes are harmed in the filming of Amazing Race Canada) In Mussels teams need to process 1800lbs or mussels that have been growing on their socks for two years. Every team decides to forgo the potato challenge and decided to with mussels. Natalie and Meaghan make up some time here and catch up with Sukhi and Jinder. Rob and Ryan join the group before anyone leaves and now step it up in order to stay in the race. This challenge is disgusting! It’s smells and they are dirty and gross. I’d so be dealing with the spuds! Sukhi and Jinder are first out followed closely by Natalie and Meaghan.  It’s a close race for last place between Audrey and Alain and Ryan and Rob.  The boys end up getting out first because Audrey and Alaine left some mussels in their socks. What detour would you have chosen to do? 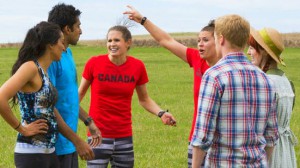 Everyone is now racing to the pit stop The Farmers Bank of Rustico but not without some drama stirred by our impish siblings. Both teams stop and ask for directions. As Sukhi and Jinder are getting theirs Natalie and Meaghan drive by. The siblings try to fake them out by pointing in the wrong direction. Natalie and Meaghan aren’t buying it though and follow their map. They are not happy with Sukhi and Jinder at all.  First to the mat  by only seconds are Sukhi and Jinder followed by the Olympians who waste no time chastising our siblings for what they think is dirty game play. A race is a race and if no where in the rules does it say you can’t fake people out than I say go for it, win your money and take the losers out for dinner and drinks afterwards and call it even! And Natalie and Meaghan had no problems with Pierre and Michel playing the race that way! Check out Natalie and Meaghan’s 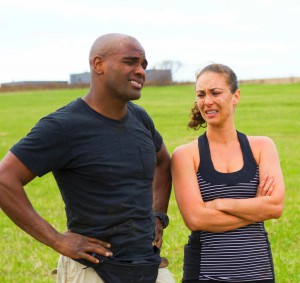 true feelings on the mat. Mickey and Pete hold strong at third and Jon tells them third is all you need to make the finals. The poor guys have a little crush on our Anne of Green Gables and want to hug her and Jon tells them NO you can’t hug her…..or ME! What a wingman. Mickey and Pete, don’t take Jon to the bar with you! Fighting it out for fourth to stay in the race are Rob and Ryan and Audrey and Alain. Rob and Ryan are just hoping that their terrible sense of direction from the Normandy leg doesn’t come back to haunt them. They just need to not get lost! Luck is on their side and they arrive fourth. Audrey and Alain are eliminated this leg of the race. It’s really hard at this point in the race because they are all just great competitors and sports and I don’t want to see any of them go. At least Audrey got a Paris proposal out of the race though. My ideal final  would be Sukhi and Jinder, Ryan and Rob and Mickey and Pete, not that I don’t love our Olympians but I’ve been rooting for these three all race and just want to see them battle it out. I love their spirit and attitude and what is The Amazing Race without a little humour? Who would your top three be and why?

Amazing Race Canada 2: How Are We Going to Explain This to Mom & Dad