This week’s challenge: the chefs face off with cheesy dishes chosen by spinning the wheel of cheese.

Last week on Hell’s Kitchen, 15 chefs created their unique twists on four classic comfort foods. After a terrible dinner service and an attempt by the women to “trick” Chef Ramsay into sending Monique home, Mieka was sent packing. (For a complete recap of that episode, click here.) Keep reading to find out about episode five and who gets eliminated!

The episode begins after the elimination and the teams are back in the dorms for the evening. Monique thinks she’s still sticking around because Chef Ramsay sees something in her. Yeah, drama that is needed for the show. It sure as hell ain’t the cooking skills. They tell Monique she is till part of the team and needs to kick herself into gear for the benefit of the team. Monique gets defensive and says she doesn’t know them and that this is a competition and it’s basically her against them.

The next morning, the chefs meet in Hell’s Kitchen and Chef Ramsay asks them to name an ingredient that is absolutely vital to have in the kitchen. They all name off various ingredients, except Bret, who says his brain is a vital ingredient needed in the kitchen. Conceited? Just a wee bit. Plus, we can’t cook with your brains you numbskull! Chef Ramsay says that none of them mentioned cheese! Milly goes on to confess that he does not like cheese at all. First of all, I didn’t like this guy because of his chin pubes threatening to fall of into food. Now, he doesn’t like cheese? Never trust a man who doesn’t like cheese. Anyway… Chefs Andi and James roll out a huge wheel with different kinds of cheesy dishes. Chef Ramsay then tells them about their next challenge: when he calls their name, they will choose a member of the opposite team to battle against with their cheese dishes. Nick chooses to go against Monique and their dish will be grilled cheese. How basic. Should be perfect for Monique. Meghan faces off with Milly and they will be cooking enchiladas. Brendan chooses to face Alison in the battle of croquettes, something he knows nothing about. Randy chooses Sarah and the spin of the wheel determines their dish will be lasagna. Adam and Christine are next and their dish is cordon bleu. Michelle chooses Josh (because “he’s nice,” she says) and they will be battling each other with manicotti dishes. Bret and T will battle over calzone. But the self-proclaimed “Italian Stallion” Bret is sure he will win this battle because he’s Italian and they are automatically better makers of calzone. Milly is worried about making enchiladas because he’s never seen or eaten one. This guy lives a really sheltered life.

It’s time for the chefs to face off with their dishes. Up first is Monique and Nick with their grilled cheeses. Monique shockingly screws this up too! She had more bread than cheese in her sandwich and added tomato slices. So, pretty much by default, the blue team scores the first point. Meghan scores a point for the red team with one of the best enchiladas Chef Ramsay has ever tasted. Christine and Adam both score a point for their teams with their cordon bleu plates. Michelle and Josh keep the score tied when they both earn a point for their manicotti. Alison brings the women ahead because she actually manages to make a decent croquette while Brendan serves gnocchi. Randy ties it again when Sarah makes a nasty lasagna with blue cheese and pistachios. PUKING @ THIS. T wins the challenge for the red team with her calzone that kicked Bret’s ass! I personally get great satisfaction every time I see Bret take a huge blow to his undeserved ego. The Italian stallion. Pffft. The women’s reward will be jet skiing in Marina Del Rey. The men’s punishment is to take a humongous parmesan wheel and grate it down for that evening’s tableside dinner service. After losing the challenge, we get to see the men (aka the “Weeping Vaginas”) cry their little hearts out over yet another defeat. 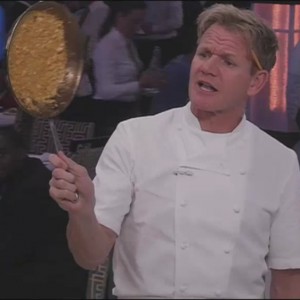 “Risotto,” brought to you by Elmer’s Glue

Once again, it is time for dinner service. The women immediately get off to a rocky start in the kitchen with Sarah’s incompetence but Meghan manages to save the day. Adam manages to make a risotto so nasty that it’s stuck to the pan like glue. The women manage to get all the appetizers out but screw up on the first entree of the night when Monique screws up on the garnish station. The women continue to perform so badly that Ramsay pulls them aside and says one more mistake and they all get booted from the dinner service. Back in the blue kitchen, Brendan continues to struggle on the meat station. Back in the red kitchen, we have another mistake! They screwed up the salmon so badly that Chef Ramsay gets pissed and stays true to his word. They all get kicked out of the kitchen and are once again the losing team for the dinner service.

As the losing team, the women must come up with two nominees for elimination. They nominate Monique for being the weakest link and Sarah for using the wrong ingredients in the dishes. In the end, Monique is FINALLY eliminated! I still think she should have went week one, the very moment she cracked the lid open on that jar of Ragu.

What did you think of this episode? Glad Monique was finally sent home? I know I was! Let me know your thoughts in the comments below and on Twitter!

Follow YRR for all the coverage of your favorite reality shows! We are covering Survivor, The Amazing Race, Big Brother Canada, Bravo and of course Hell’s Kitchen and RuPaul’s Drag Race! There is something for everyone so click the links and check out the great coverage!