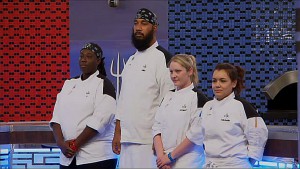 We are down to the final four chefs on Hell’s Kitchen… the best of the best! With just one episode left of season 14, TWO chefs will be leaving the competition and our two finalists will be selected! Keep reading to find out who makes it to the finale and then be sure to comment below with who YOU want to win it all!

This episode begins with Meghan, Michelle, Milly and T leaving Hell’s Kitchen to go grocery shopping. Poor Meghan hasn’t got to leave Hell’s Kitchen in weeks because apparently she is cursed and has lost nine challenges in a row. So, you can imagine how exciting it is for her deprived ass to get to go to the supermarket!

They meet Chef Ramsay at Bristol Farms for their next challenge: they’re going shopping! But there’s a twist, they have 10 minutes and $25 each to purchase all the ingredients needed to produce a delicious and unique vegetarian dish. They all get the ingredients needed and now are back in Hell’s Kitchen, where they have just half an hour to prepare their dishes to be judged by Ramsay. The first dish to be judged is T’s vegetarian twist on “chickens and dumplins” (YES, she really said it like that!) and Chef Ramsay found it delicious for the most part. Milly is next with his ricotta and spinach souffle that he prepares for his son all the time. Even though Chef Ramsay says its not very appetizing to look at, it tastes great. Next is Meghan with her zucchini angel hair pasta. Ramsay is impressed with her dish and says it has finesse. Finally, Michelle is up with her complicated dish. Simplicity is not a word that she understands very 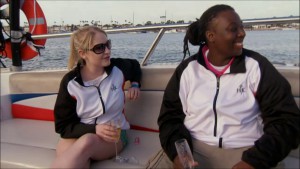 well. Even though her dish tasted good, he said it is more suited for Sunday brunch than it is for a dinner. Chef Ramsay decides that the winner of this challenge is Meghan! The curse is FINALLY broken and she gets to leave Hell’s Kitchen for a reward for the first time in a long time! She chooses T as the one chef who gets to accompany her on her reward trip. It must be nice to be T… she doesn’t have to win these challenges but everyone lets her tag along on their trips! The two of them will get to board a private motorboat in Newport Beach as well getting a chance to go parasailing! While Meghan and T are enjoying their fun, Milly and Michelle will be cleaning Hell’s Kitchen once again.

Before dinner service, Chef Ramsay has a little surprise for the chefs: they are visited by their loved ones! Michelle gets to see her boyfriend and her sister! T gets a visit from her daughter and her girlfriend. Meghan gets surprised with a visit from her mother and Milly gets to see his son Milly Jr. and his girlfriend. Tears are shed, laughs are had, memories are made… blah blah blah. After this lovey dovey moment is over, it’s back to the kitchen and time to get back to work! 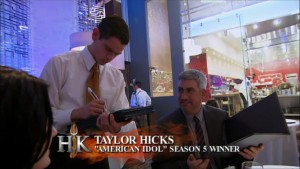 Taylor Hicks takes a break from his whirlwind post-American Idol career to dine at Hell’s Kitchen. (LOL just kidding… who the hell is this guy?)

It is now time for one of the most important dinner services of the season. The four remaining chefs have a lot riding on this one. Chef Ramsay announces that each of them will have a turn running the pass… not as a sous chef like they did last week, but as THE head chef. (Except, not really. You think Ramsay is gonna let them have complete control? He’s still gonna be hovering like a vulture ready to pick them off one by one for any mistakes that are made.) He also announces that TWO of them will be eliminated and the other two will become finalists. Sous chef Andi will be covering their stations while they run the pass. Chef Ramsay has instructed her to sabotage dishes she sends up to the pass in order to test the quality control abilities of the chefs. Milly is up first as the head chef. He fails his first test as Chef Andi uses crab instead of lobster in the risotto. Milly steps up his game and tastes everything before he sends it out to the dining room. Meghan is next and she’s such a badass that she knows she won’t make any mistakes… right? She seems to do pretty well but Milly is beginning to fall apart (or sabotage her) as he keeps sending up bad risotto. Andi replaces halibut with sea bass and Meghan fails her quality control test. I don’t know why, but those sea bass are really trying to ruin her career! Michelle’s turn is next as head honcho and she’s still just as annoying as ever with her voice. Michelle also fails her quality control test as she can’t tell the difference between cauliflower and broccoli. Meanwhile, T is having issues cooking the damn wellington and is pissing Ramsay off! Finally, T is up at the pass. She is the only chef to manage to pass her quality control test when Andi tries to sneak a lamb wellington in place of beef. 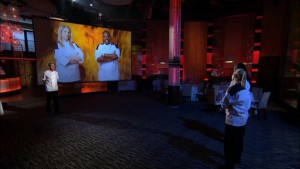 The two finalists of Hell’s Kitchen season 14: Meghan and T!

Dinner service was a success but Chef Ramsay can only let two of the four chefs move on to the finale. He asks for them to come to a consensus on the two chefs that should be sent home. After each of the final four tell Chef Ramsay whom they think should go home, he has made his decision. Even though they are all great chefs according to him, the first chef not moving on the finals is Milly! The first person to advance to the final is Meghan! (Shocker!) Chef Ramsay decides that T will also be competing in the final! With that, Michelle is sent home with Chef Ramsay’s well wishes.

There we have it, folks: it is going to be Meghan vs. T on finale night next week! Which one do YOU want to win it all? Let me know in the comments below!

Follow Your Reality Recaps for coverage of all your favorite reality shows! New content is happening every day, so check it out! And if you love all of the FREE coverage we bring you, you can consider helping us out by doing your Amazon shopping through our site, making a donation via Paypal, or becoming a Patreon. All of the links are conveniently located in the sidebar for you!