We have so much to talk  about this episode. Big  Brother Canada sure does  love to pack a lot into one  episode so lets not waste  anytime. We begin with the aftermath of what was one of the most explosive nomination ceremonies I have every seen in all of Big Brother history.  Paul is putting all the boys on blast, screaming that Jon and Kenny are trying to oust Andrew. The whole house is in uproar over Paul calling Andrew a racist.  Kenny is particularly upset since Andrew, Arlie and he have such a close bond.  Paul is whining Andrew called him a hypocrite and Kenny loses saying that hypocrite is nothing compared to what he had just said about Andrew.   Ika is telling Paul that you just can’t say things like that about a person, especially since they aren’t true.  Andrew is upstairs reassuring Neda that she has nothing to worry about that she is safe and is just a pawn. We all know what happens to pawns, unless you are AJ or Spencer.  Sarah sees how upset Kenny was after the incident and goes into the bathroom to make sure he is OK.  Paul decides after talking to fellow stooges Adel and Kyle that he needs to talk to Paul. Andrew wants no part of him being in his room and tells him to get out and not talk to him at all the rest of his time in the house. Paul won’t budge. Finally Arlie comes in the room.  Seeing how explosive Andrew is on the verge of getting he sets him up with headphones and tells Paul to come back later, after Andrew has calmed down a bit. Paul leaves.   We are now really seeing the emergence of the Kyle, Paul, Adel alliance aka The Losers Club (Kyle’s words, not mine).  They boys have me totally confused. It’s such an odd pairing.  Paul is trying to play the bad guy so that everyone will want him in the final 2. His plan will back fire, he is no Dr Will, nor is he a Dan Gheesling.

We are now brought into the war room where they are given a task. They are given traits about all 13 house guests and they have to match 9 of the bobbleheads with the traits in 30 minutes.  There was things like 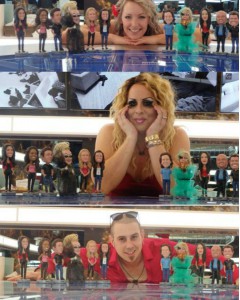 motivational speaker, teen mom, fashion stylist, loves yoga.  They complete their challenge and their reward is a secret scene of the show WITH audio. This is huge for them as they have only been able to watch their “silent movies” as they like to call them. Their scene was the nomination ceremony and all the drama that ensued right after. Allison is freaking out. She is eating this up and can’t wait to bust into that house. I love her!  Our 3 are also given a bucket of Canadian themed things and are told that they have 1 hour to prepare their final plea to us. They can use any of the props in the bucket.  Nate and Scott use it to their advantage, Scott dresses up as Contessa with a little arm band maple leaf. Throughout the show we get to see their final plea, voting is now closed and we will see tonight who enters the house I can’t wait!

Meanwhile back in the house they are given 3 team building challenges. The first and only one they show is that they blindfold half the house and the other half,  have to guide them around and clean up the nastiness that has become the Big Brother House. I think this challenges had 2 purposes. 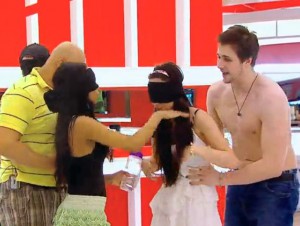 Firstly they needed to get  the tension in the house  down several notches, and secondly that house was  DISGUSTING! I thought  BB15 had the messiest  house but no, these guys  take the cake. I think they  really just wanted the  house cleaned. The second  challenge was the magic carpet, where they had to stand on a blanket and turn it completely over with no one stepping off the blanket or touching the floor with their hands. The third was a rope challenge. The rope had to go through the arm of their shirt down one leg of their pants then up the pants of the next person through the sleeve of the shirt and so on til they were all tied together. They completed the challenge, and they are to get a reward but I have still yet to see what that is on the feeds. They were complaining yesterday they still hadn’t gotten it.

They pick players for the veto competition and  along with Andrew, Paul and Neda we have Jon, Kenny and Sarah playing. I think the first five alliance wet their pants a bit a this since 4 of their 5 are playing and the 5th is hosting it.  They learn that along with playing for veto they all get to see the movie Divergent. They cram this movie down our throats like they do EVERY year. They are also told that the veto competition would have something to do with the movie, so as they are watching it their minds are trying to figure out what they are in store for. Now that Kenny knows he is playing in this competition he decides its time to talk to Andrew about a plan to backdoor Kyle.  Kyle is more a physical threat than Paul, and Adel is really nothing without Kyle egging him on.  Andrew sees what Kenny is saying and the two report to the rest of the house the plan to save Neda and put up Kyle if they win the veto.

Kyle and Adel have realized that they are totally up a creek without a paddle because of Paul and his comments. Adel realizes that there is most likely gonna be a back door nomination of either Kyle or himself. Now I reported in the spoiler section that Adel had lost his mind. I still stand by that but some of it was strategy to distance themselves from Paul but they ended up alienating themselves even more. To read what happened click here warning there are POV spoilers at the end! These three are totally cut off from the house now. They enter a room, and everyone leaves. I have not seen such a division since BB6. 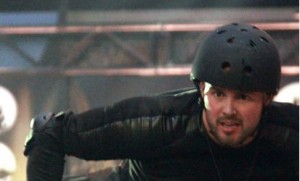 The veto competition begins, and holy smokes.  I think Big Brother Canada challenge designers hooked up with Opposite Worlds designers because this thing  CRAZY for week 2.  They have to jump 10 feet off a platform, crawl under a low crawl bridge, run to  cargo net wall, climb up it and over it into a pool of freezing cold water. There they have to find 1 of 6 puzzle pieces, zip line it to their puzzle board, and repeat til they complete their puzzle.  WOW. Here is where it become the story of Paul facing his fears.  The man is terrified of heights. Everyone jump but Paul. He is standing there almost crying from fright.  Everyone else is almost over the cargo net wall and Paul finally jumps.  He gets to the wall and he can’t get over it. Paul is a big guy and this is taking ever ounce of strength he’s got. Everyone laps the poor 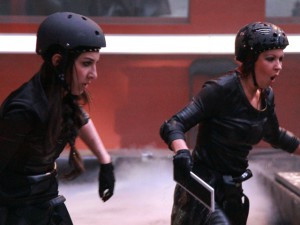 guy has he tries to pull himself up.  He finally gets over grabs his puzzle piece then freaks over the zipline.  No one else can go until he goes so there is a line forming behind him. I’d be so mad. Paul gets the courage to go puts his piece in and just quits.  His boys Adel and Kyle reassure him it’s all good and we get on with the comp.  Kenny is leading this challenge quite well. Poor Sarah and Neda who are weak from slop are holding their own but each time around gets harder and harder. Poor Sarah gets to her board and realized she grabbed the same piece twice. My golly if her kids could hear the words that came out of her mouth.  She was hilarious and I still love her!

We don’t find out this episode who wins the veto so you have to tune in tonight at 9 on Slice to see who wins the power of veto. It will be a jammed packed show since we have veto competition, veto ceremony and eviction. Plus they reveal who goes in the game and the HoH competition. This is not the episode to miss people.

How am I feeling about these house guests you ask? Well I am loving Kenny more and more every day. He really is the brains of the First Five Alliance. Andrew listens to him. This can put his place in the game in a dangerous position if people really start to notice this, and they have. I am still loving my final picks of Jon and Sarah. I had such high hopes for Adel coming into this game, but he is unravelling so fast. I am hoping with the eviction of Kyle he can reevaluate.  Adel has a good heart but teaming up with the self-proclaimed douchebag was not the smartest of decisions.

Let me know what you think of the drama that happened over the weekend! Comment below I’d love to hear your thoughts.  You can also check out what Spencer and McCrae thought of that happened last week here.  Last but not least if you are loving all the content that we are bringing you here at Your Reality Recaps, then you can help up keep it coming by kicking in even a dollar here.