OK Big Brother Canada fans, we are at the last eviction night of the season and I don’t know whether to laugh or cry. Laugh that I will get a significant amount of time back to my life or cry that all the laughs, tears and frustration that this crazy bunch has brought to my life for the last 75 days is over tomorrow.

Arisa, looking fabulous as always, starts off the episode calling  the Final 4 into the living room. She lets them know that within the

hour one person will be going home. They were all in a state of shock then poof she disappears and we get a bit of a recap of what happened between nominations and now. Sabrina really wants Jon to go home next because he is way to likeable and he’s a strong physical threat. Heather isn’t feeling very safe. She is scared that Jon isn’t going to stick to their final 2 deal, which we all know he isn’t. Well that isn’t true, if Heather pulls out a veto win of course he’d take her to the final 2 The girls bring up the possibility of an all girl final three, but Neda really isn’t feeling it. She wants Jon in the final three because she knows that Jon will take her to the end, and so will Sabrina. Ultimately Neda wants to sit next to Sabrina in the end.  She has worked hard to position herself well in the game, and she isn’t about to change focus now. 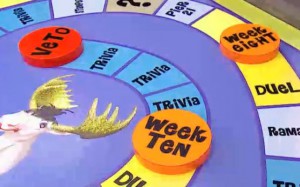 Time for the POV competition. One of the best ones I’ve seen yet, and not just because it was hosted by Marsha the Moose. The house guests come out to the yard each one dressed in an outfit from a previous challenge. Marsha greets them and introduces us to the game  “Marshaland”. On the ground was a giant board game laid out, each of the 10 weeks of competition had a section. They rolled the dice to move throughout the game. There were trivia spots, duel spots and how bad do you want it spots.  Obviously the trivia spots got them a trivia question. If they got it wrong they had to go back to that weeks beginning space. If they landed on Duel they picked a player to compete against, they would spin a wheel and whatever challenge it landed on they had to do. Lastly he how bad do you want it space gave them a punishment but they could advance directly to the next weeks beginning space. Once they got to the end they had to answer three trivia questions correctly to win the Veto. Heather was the first to land on a Duel space and chose Jon. The wheel landed on Slop off 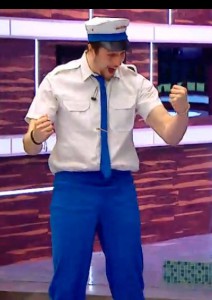 and whoever ate a bowl of slop the fastest advanced. Jon took that one home.  Duel was landed on three more times, each time Jon was involved and the wheel landed on the challenge he couldn’t do to save his life  “STAMPede”  It allowed Neda to catch up to him because Jon landed on two how bad do you want it spaces. Jon is on slop for the rest of the season and if that wasn’t bad enough he’s not allowed to shower for the rest of the season. The girls are not happy! Heather actually turned down the opportunity to move forward by declining to wear her “Nuts to That” outfit for the rest of the season, Neda landed on it and agreed to be stuck in her farm girl outfit til the Finale. Lets hope they let her change on Finale night. No one wants to win $100 000 dressed like that. It came down to a battle between Neda and Jon and Jon ended up winning the power of Veto.

Jon is now in control of the game. Neda and him celebrate in the storage room. While Neda has always been willing to cut Jon when the time is right, Jon has been playing for the both of them.  He knows he is taking Neda to the final three and decided he needs to tell Heather she is leaving. 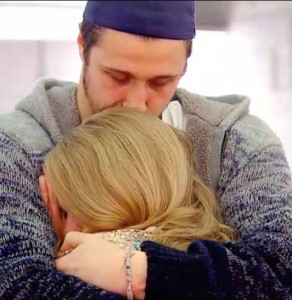 They are friends and he knows that lying to her will not win him favor when she goes to vote. He talks to her alone in the bedroom and gently tells her that what is best for his game is taking Neda to the final 3 and not her. These two have been pretty close the entire game and view each other like brother and sister. Heather has one of the most emotional reactions I have ever seen and it had me in tears. She is devastated, Jon leaves her alone to get herself together and she just sobs and sobs into the pillow. It’s bad enough that her Big Brother dream is coming to an end so close to the end of  the game but Jon sending her out is just throwing salt into the wound.

Arisa comes back to the Final 4. The break for a recap has allowed Heather to put on a dress and look all cute.  Arisa lets Neda and Heather 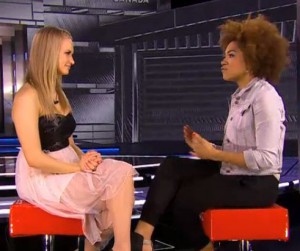 give one final plea to Jon to keep them in the game. Heather Then Jon has to give his decision on who he is evicting and why. Ultimately we know that the friendship that he formed with Neda overruled anything he had with Heather. She is evicted from the Big Brother house. She goes out to an empty studio and has a candid chat with Arisa. Arisa asked her about her feelings for Sabrina because Sabrina had been pretty cruel to her early on in the game. Heather the class act that she is said that in the last few weeks she has gotten to know Sabrina the person and that everyone makes mistakes. Heather is a forgive and forget kind of person and I am sure that Heather will be friends with everyone after the show.

Arisa then shocks the house guests one last time. With Heather by her side she informs the final three that Canada is indeed the 7th Jury vote this year, and they have only a few minutes to come up with a plea to Canada to get our vote. Sabrina goes first. Her arguments were that she

made a risky move by entering in the First 5 alliance, she was put on the block 6 times and never walked through the doors. She used her strong social games to get by and then went to win the most important HOH of the season. Neda is up next. She starts by telling us how cute we all look. You know what Neda, flattery will get you everywhere!  She goes on to say how she has been dreaming of this since she was 9 years old at home watching and barely even speaking English. She has so much respect for this game and made strong moves to remove big players. She was never in a position of danger because she worked so hard to secure her spot. Then Jon goes up. He starts by saying  that he was at a disadvantage this whole game. He wasn’t an avid fan so he had to base his game play off of others. Then he hurt himself. He won a critical veto to ensure Andrew left the game. Once his injury was healed he went on to play a physical game and won 2 HOH’s and 2 more vetos. He says he will respect whatever we decide to do.

That is people our final 3 are Jon, Sabrina and Neda. Not what I predicted at the start of the season but I am happy to say my pick to win is still in the game. I am going to this Finale very happy with who we have left. All strong players, all deserving in their own rights, even Sabrina. Yes this season I have been critical of her. I don’t enjoy her style of game play but there are a million different ways to win this game and I respect her for what she has accomplished. I welcome the chance to talk to her and everyone outside this game. It is a game and that game is left inside the house. I really do hope we can learn from the fall out of BB15 that these are people with feelings and families and as Demi Lovato says “Let it Go”

I know you all know by now since I’ve been so excited about it that I am going to the Finale tonight.  I can’t wait and am so thankful to Eric and Jon for providing me with this amazing opportunity. Unfortunately publicity restrictions don’t allow me to publish or report anything until tomorrow so I can’t live tweet, but I will do my best to document everything I can for you and fill you in tomorrow. You know my drill by now, please comment below and let me know your thoughts. I really do love interacting with everyone and I will be back tomorrow with some amazing stories!