Trending
You are at:Home»BLOGS»UTOPIA»Utopia Feeds: Night 1 Booze, Barebottoms and Battles

Normally I won’t be doing daily feeds updates, but the first night in Utopia was so awesome I don’t want to forget any of the highlights. If you watch Big Brother, more happened tonight on the Utopia feeds then has happened all season on Big Brother 16.

The recipe for success? Gather 14 people from opposite sides of the political/religious/economic spectrum, put them around a campfire and give them booze. What could possibly go wrong? EVERYTHING! And as a reality tv (or these days – internet feeds) viewer, it was WONDERFUL!The feeds turned on late this afternoon, a full 7 days before the TV show starts. It appears that the new citizens walked into the compound just after lunch and had an hour or two to settle before the feeds “went live. 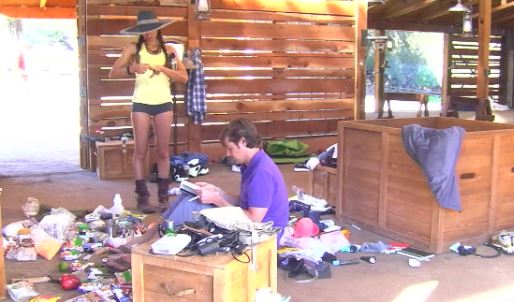 The first few hours (the last of the daylight) were not particularly interesting, this potato was multitasking on other things at the time. The only things I noticed was the new citizens turned their new house (a barn) into a pigsty in reality tv record-setting time, and someone named Josh was telling everyone how to do everything. Yeah, that’s not gonna cause any problems later on.

Sometime around dinner time the general banter (get to know you type conversations) turned into a small group meeting where the group decided to conserve food and have two meals a day, and the pregnant lady (Amanda) said she was ignoring any rules or limitations on what she was allowed to eat. (they don’t know she’s pregnant) Also, it’s a reality TV rule that food conservation ends when someone gets pissed at the group, and dumps all the food in storage on the floor.

ometime in the early evening they find the Booze tucked into the starter food provisions, or Aaron brought it (not sure) and its “Off to the races” for us viewers. Before you can blink, booze is consumed, clothes are flying and 1/2 the people are nekkid in the lake. Not Safe For Work (NSFW) photo ’cause I’m good like that.

One Utopian in particular was having a grand old-time hitting the bottle: Josh. The guy who had no problem sharing his opinions now added booze to that fire. Once our reality TV hero Josh got good and liquored up, he took off to have a few more one-sided conversations. He got into a pretty good argument with Hex and shortly thereafter got into an actual physical fight with someone. ( I have no idea who these people are, it’s day 1, ok?)

So the cameras shift to a really zoomed out view, and the audio feeds are muted, and it turns out our new source of entertainment is hauled off by the security guys. The feeds have been on for all of what, 4 hours? Before I leave this, Josh was the contractor/construction guy, kinda important to the first few weeks of our new Utopia, so…  Hot damn we’re off to a good start!

But wait, there’s more! See Josh wasn’t the only one who hit the bottle. One of the other people (seriously, it’s day one, I have no idea who these people are!) starts having a somewhat heated argument with the Pastor about religion. (I’m not transcribing what was said because I’m not getting involved into any religious disagreements here. My momma didn’t raise no turnip!) Although it didn’t get out of control, it’s laying the groundwork for future conflict.

So we got booze, nekkid people, a physical fight, and a heated disagreement; that’s a lot to pack in one evening. But we’re not done! No No! What got left out? That’s right kids, the perennial favorite of reality TV viewers everywhere… The House Meeting. For those new to reality tv, this is when the whole group gets together to discuss some problem. And it never ends well! If you’re ever on a reality show and they call a house meeting, excuse yourself to the bathroom. Fake being ill if need be. (I hear licking your palms is good for selling your sudden fake sickness, don’t fake a fever, that’s a fast pass to the show doctor and possibly having your cover blown.)

But for us viewers, the House Meeting is usually 24K SOLID GOLD conflict and drama. And on the very first day of Utopia, it was like Festivus came early this year. Everyone sat in a circle and aired their grievances of how Josh had wronged them. At some point earlier today a new cast member was added to the show. It was the “talking stick.” In a group meeting, he (or she) that has the stick is the only one that’s supposed to be talking. Good in theory anyway. The stick got passed around and eventually the group came to the decision that Josh was not welcome back into Utopia. The group decision was pretty speedy because: “Can we finish so we can wrap this up? I’m tired and want to go to bed.” This is what happens when you put adults in a reality show. After the meeting finished at 10:20 everyone set up their sleeping bags and went to sleep.

JUST KIDDING. They set up their beds (about 3/4 of the group outside under the stars), broke out the booze again and most of the group is still up drunk talking at 1:00AM Utopia time. One interesting tidbit in the conversation, three of them agreed not to vote each other out. Does that mean there is some sort of periodic vote to get rid of the least productive member of society and bring someone new in? We don’t know yet, and nothing about that aspect has been announced by production. Just know that at the end of the day, it is a TV show, so don’t be too surprised to see some sort of elimination event. It is what it is.

Also, since these people are here for a year, I’m calling it now, first hookup in under two weeks. (morning after note: I was wrong. Supposedly it happened the first night. Aaron/Bri)

Couch Potato Note: The feeds are much clearer (i.e. High Def) then that other show. 2 of the 4 camera views are free (with ads). There was no cutting to fish with annoyingly loud music, but production did have to either blur the streams or zoom out when they felt they needed to. It wasn’t quite as censor free as we were promised, but it was a big step in the right direction. So far, by far, my favorite part of this show is that the production department is on Twitter, and at least for now interacts with the public.

His identity is a secret ... but his snark isn't! When not dodging the peeler or becoming twice baked this spud is known on twitter for his sharp whit! He will be blogging the Fox hit Utopia for us all season long. So check out his blogs and follow him on social media with the links below.