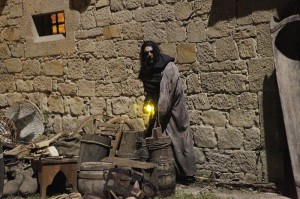 At the end of the last episode, Ansgar and the Paladins were hiding from an orb controlled by one of Verlox’s spies. As the orb moves around the castle, Ansgar explains that it is a powerful piece of magic invented by Verlox, and that whoever is controlling it is very close. Ansgar tells three Paladins to go with him, and the rest to go with Crio and sound the alarm. They are to look for the person controlling the magical orb. After the search has been underway for several minutes, the Vizier appears from out of nowhere, shouting that he found the spy. The Paladins surround and hold down the traitor while Ansgar grabs the fire orb from him. Ansgar explains that a fire orb is very dangerous, and a few of them can destroy an entire castle. Sir Ansgar disarms the fire orb, then hands it to the Vizier, who looks rather excited. As the Paladins cuff the prisoner, they discover that his belt is missing seven orbs. When Sir Ansgar sees the prisoner’s face, he says, “Hara?” in a shocked voice. The Vizier asks if Sir Ansgar knows the traitor, but Ansgar says there is no time, they need to find the other orbs and bring the man to the dungeon. Ansgar directs the Paladins to search their quarters for the orbs. The Paladins search to no avail, then gather in the common room and remark how there are seven orbs missing and seven of them. The Paladins think that it is suspicious that Sir Ansgar knows the traitor. They say he owes them an answer, and they will find out tomorrow. The Paladins continue to search before they go to bed, but are still unsuccessful.

The next morning, the Paladins gather with Sir Ansgar in the courtyard. He tells them that his men have found three of the fire orbs, but four are still missing. A falcon flies in and lands on a villager’s arm. Ansgar tells the Paladins that the falcon will aid them in the search for the missing orbs. They each need to put on a bird-like mask, which will allow them to see what the falcon sees, and will guide their search. Once they find the location of an orb, they need to retrieve it and bring it back to Sir Ansgar. Since there are four missing orbs and seven Paladins, I’m guessing that the three Paladins who don’t find an orb will have to face the Fates. Lina and Andrew head to the battle dome, Shondo, Patrick, Bonnie, and Leticia run to the mote, and Adria goes outside of the castle. Lina finds an orb first, Leticia completely misses one and Bonnie finds it, Shondo finds the next orb, and Patrick finds the fourth orb where Adria was initially searching. Since she was the first Paladin to find an orb, Lina earns the Mark of Observation. Ansgar jokes that if Lina gets a third mark, they’ll need to get her something bigger to wear. Unfortunately, Adria, Andrew, and Leticia will have to face the Fates. The Paladins follow Ansgar to the dungeon so they can interrogate the prisoner. Sir Ansgar asks the prisoner, “Why did you betray the kingdom? Is this your way of paying me back for saving your life?” Hara responds that Ansgar doesn’t know anything at all. Ansgar asks if Hara poisoned the  Queen, and he replies that Verlox has many servants inside the walls of the castle. Ansgar shouts, “Who was it?” and the prisoner merely laughs and says that Verlox will be here soon, and he will come after the Paladins. Patrick brings Ansgar the traitor’s cape, which contains pieces of a map. Sir Ansgar tells the Paladins to return to the common room and study the map. 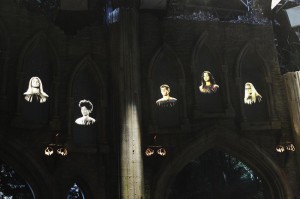 The Paladins try to piece the map together, while pondering what the map might depict. They finally decide that the map is incomplete, and they think it is actually two separate maps. Crio comes and collects the map pieces, saying that the Fates asked him to bring it to them.  The Paladins return to their rooms to discuss the upcoming Fates challenge. Bonnie says that Adria has her vote, as well as Patrick’s. Shondo says he will vote based on how the Paladins perform in tasks. Andrew says he feels as though no one has his back, he thinks that he proved that he doesn’t have what it takes to be the One True Hero because he was so impulsive during the search for the orbs. The Paladins adjourn to the Hall of Fates, where they are told by the Fates that victory in combat requires preparation, but a warrior must also take advantage of his opponent’s mistakes. Crio informs the Paladins that they failed because they were unable to convert knowledge into action today, but they have another chance. The Fates completed the map found in the traitor’s cape, and to win the challenge, they must be the first Paladin to line up the nine swords so a beam of light passes through the circle on top and points out the place on the map from which Verlox will attack. Each of the Paladins have several times when they think they are done, only to realize they didn’t place the swords correctly. After calming down and doing the task methodically, Andrew ends up finishing first. The Paladins are impressed that Andrew slowed down and took the time to concentrate on the task, instead of being impulsive like usual. They discuss who should be banished, with Patrick and Bonnie sticking up for Adria, and Lina and Shondo praising Leticia. 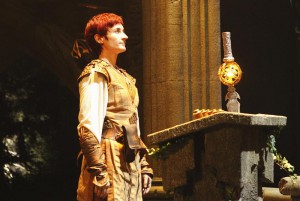 When it comes time to vote, only Patrick and Bonnie stand behind Adria, so she is banished from Everealm. The Fates warn the Paladins that Verlox approaches from the West; the days ahead will be darker, the tests will be harder, so they must be stronger. Andrew says that he loves Adria, but he saw her, Patrick, and Bonnie as a threat, since they were so close. Shondo says he doesn’t do politics, he just chose based on who could help them fight Verlox the best. Soldiers are patrolling the courtyard while Sir Angar and the Palad 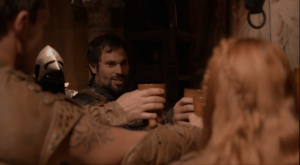 ins enjoy drinks in their living quarters. Sir Ansgar toasts to saving the castle, and the others cheer and drink up. Sir Ansgar says, “Don’t get tipsy, if you’re not used to drinking. Are you used to drinking?” The Paladins laugh and reply, “Yes!” I really enjoy this increasing camaraderie and trust between Sir Ansgar and the Paladins, but a part of me thinks it is too good to be true. Since the Quest is full of shocking twists and turns, I think Sir Ansgar might have a tragic fate. Ansgar asks if the Paladins have anyone back home waiting for them. Bonnie says she is keeping her options open. The Paladins respond, “What about you?” to Sir Ansgar. He pauses, then answers, “I had a wife once. She was pretty; she was about to give birth, and things didn’t go as they should have. I have my sword now and I have the Queen and that’s good.” Leticia respectfully tells Ansgar that she feels they deserve to know how he is acquainted with Hara. Ansgar complies, telling the Paladins that he and Hara were in battle together. Ansgar saved Hara’s life, and Hara saved his. Hara was like his brother, but Ansgar felt betrayed when he discovered that Hara had stolen money and gold. Hara fled when Ansgar found out, and Ansgar didn’t see Hara again until he showed himself to be a traitor in the castle.

The Paladins are celebrating with Ansgar when there is a loud noise that shakes the castle. They immediately leap up and run outside to defend the castle from Verlox. Ansgar asks Crio what happened, but Crio simply responds, “It all happened so fast!” The Queen comes outside and asks Sir Ansgar how this is possible, when there is a commotion everyone turns towards. The Paladins ask who it is, and the Queen says, “It is Verlox.”

It seems that Verlox has finally began to invade the castle, or at least has started to break through the outer walls. If Verlox is truly at the castle gates, do you think the Paladins are prepared to defend the castle and stop him? What are your thoughts on Adria being banished? I think she basically shot herself in the foot when she was searching for the orb, because she was the only Paladin looking in that area, and she didn’t try to uncover the barrels or look in any hidden spots. Adria just searched around the barrels, and along the wall of the castle. There was really only one obvious hiding place – the pile of barrels and various other items – amongst the scrub brush and castle wall, so she doesn’t really have an excuse for not finding the orb. Let me know what you thought about ABC premiering two episodes in one night down in the comments section below!