The Quest has finally begun! We have been waiting for this all summer.  Hanne is away on vacation this week but we didn’t want you to have to wait to hear what we thought of the premier so she has kindly allowed me (Dana) to guest blog in her absence. She’ll be back next week! We find out that The Quest is going to be a mixture of reality and scripted television.  As we are introduced to our 12 Paladins we find out that while they are competing in challenges to determine who will be the Hero that earns the privilege to wield the Sunspear and save Everealm from the Evil Verlox, they are

doing it within a scripted story line aided along by actors playing characters. To refresh your memory on the 12 Paladins check out Hanne’s Cast Preview Blog This has never been done in a competition based series before, so I must admit, I was totally confused at first. With the aid of my Fantasy loving husband I was able to come out the other side! Our Paladins are led thru a cavern to a mystical river. They go down this river to meet their Fates. The Fates have called them on this quest, and explains the Sunspear is the weapon that will defeat Verlox, turn the darkness back and save Everrealm. They are told to go out and find the pieces of the Sunspear and their path will find them, and so with their follower Crio.

At the edge of the Marwood Forest they find the 12 pieces of the Sunspear and Crio appears. He is charged with bringing the Paladins safely to Castle Saenctum. They walk through the Marwood Forest but it’s not safe travel for them. It isn’t long until a huge

Troll springs out from a bush and snatches Crio’s helper Sebastian away. Everyone is shaken by what happened and the fact that their first instinct was to run. Shondo says they should never leave someone behind again. They stay and fight.  They journey through the night, avoiding danger at every cost.  Just as they see Castle Saenctum three men on horseback give them chase.They make it to Castle Saenctum but once in the village not everyone is happy to see them. They aren’t believed to be Paladins sent on the quest to save Everealm and are thrown in jail. Crio assures them that he will sort everything out. There is nothing like locking people up to separate the Type A personalities from everyone else. Immediately some of them start to climb walls and try to figure a way out. Ashley’s first reaction is to bust out. Patrick wants to make a plan, and Shondo says lets give Crio some time. Adria, the voice of reason, points out that they are guests there and busting out will just prove to them that they can’t be trusted and is that what they want? After a debate they decided to wait a while because they need to prove to the village that they can be trusted. The Paladins have plenty of time and use it to tell each other about themselves.

The jail keeper tells Crio that these guys are his responsibility. Crio asks him to tell them the history of The Quest. He doesn’t want to but does so unwillingly. Over 8000 to defeat Verlox The Fates assembled 12Paladins that created a magical spear. The Fates tested them til the last Paladin turned the darkness back, the one true Hero. When Verlox was banished The Fate reclaimed the Sunspear.  Verlox reappeared and  The Fates assembled 12 more Paladins, giving each of them a piece of the Sunspear to find the one true Hero to defeat Verlox. He says he sees no Sunspear in their hand and turns away not deeming them worthy to hear the rest. They all whip out their piece of the Sunspear at Crio’s urging and  he is convinced. He tells them the Fates challenge the contenders until The true hero remains.  Crio is told he is to clean up any mess his charges make. Crio brings them into the Castle and shows them where they are to be staying. There are 2 people to a room.  While on their travels and in the jail our contenders have had time form friendships and make bonds, so people naturally pair up. There is an uneven number of guys and girls and there has to be a co-ed room. Of course married, father of  two Patrick is the last guy standing. Who is he going to end up with. He ends up with Katie who he sees as a little sister and probably safest girl room-mate he could get. 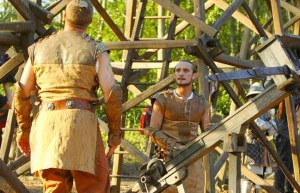 The Paladins are woken up in the morning and turned over to our happy-go-lucky jail keeper (Mr Tightpants as Jasmine calls him) from the night before. He informs them that he doesn’t care about them or the quest but it’s his job to turn them into warriors. Their first challenge will teach them to be a reliable part of a unit. If one fails they all fail. They are divided up into teams of three. The White Team is Andrew,  Bonnie and Ashley.  The Red Team is Adria Letitia and Jasmine.  The Blue Team is Patrick, Katie and Christian and the Yellow Team is Shondo, Lina and Jim. They need to learn to use scorpions which are these arrow flinging devices. One person used the scorpion, another gathers the arrows two at a time and the third person is on a look out tower being the eyes and ears of the scorpion user. In front of them is an army of dummies they need to hit.  Their goal is to hit as many as possible while under fire. The team with the least amount of hits loses. 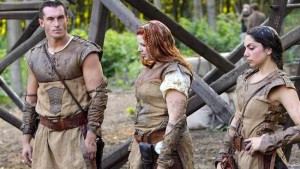 Everyone seems to get the hang out it, except the Blue Team. Patrick was charged with using the scorpion which he learned quickly but Katie as his eyes wasn’t every good a giving direction. Patrick thinks he should have been the eyes because with his math background he would have been able to give precise direction. The White team came out on top hitting 13 targets. They were asked to decided who showed the greatest leadership. They chose Bonnie because she was the eyes and without her would have hit nothing. Bonnie receives the mark of leadership.The Blue Team loses with only 4 hits. The Blue Team now needs to compete in a challenge to save themselves. They are given bows and arrows and assigned a color. In front of them are three rotating colored dummies. They need to hit the others dummies, the person with the fewest arrows in their dummy is safe, the other two are up for banishment. The guys right away start hitting Katie’s dummy, the girl has no chance. Christian feels he has a better chance of staying against Patrick, and once Patrick say Christian going for Katie’s he did too. Christian got the fewest hits and is safe. 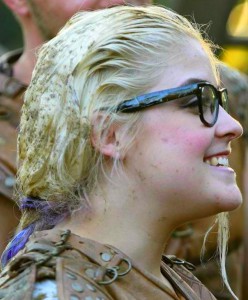 he rest of the Paladins  have to debate who is safe and who should leave. They both have strengths and weaknesses. While Patrick is physically strong, Katie is inquisitive and a fast learner. The point was made that at first they thought getting rid of the stronger ones would be better but in order to become the Hero you need strong people with you as well. They return to the Fates. They are told to stand behind the person they want to continue on The Quest. No secret ballots here folks, this is right out in the open for everyone to see. You can’t cast a hinky vote in this show! While voting happens Patrick and Katie are facing the Fates. The Fates tell them to turn around and they must face the music. In an 8-2 vote Patrick stays on The Quest. Katie is left with the Fates. She gives her piece of the Sunspear to the Fates and is banished!

So what did you all think of the first episode of  The Quest? I thought it was great. Production has stepped it up a notch with this show. The sets and costumes and monsters are amazing! It’s like real life World or Warcraft! Who do you think will the One True Hero? Comment below and let us know. I know Hanne is super excited to be back next we and start blogging for you all!