Hey everyone! I am back. I was on the fence about blogging this season but finally made the decision to do it. It looks like it’s going to be too good not to! So lets to an episode 1 quick recap in a paragraph. Katilyn cast off 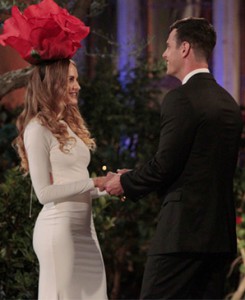 Ben Higgins is our newest Bachelor. Not a bad choice. I liked him and he’s pretty cute so thumbs up. After a pep talk from some guys that know what they are doing and Chris Soules we start the usual limo entrances. My stands out in the crazy category are Mandy (hello giant flower) Chicken enthusiast Tiara (lets face it Tiara’s don’t have a good track record just ask Sean Lowe), Lace because well you all watched the show no explanation needed, Onesie girl and Meagan because she brought a 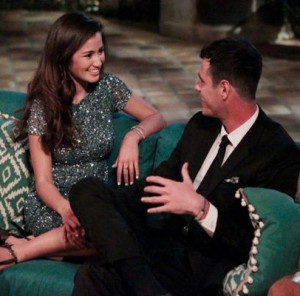 freaking horse! Why wasn’t this girl cast for Chris! On the normal side Caila (my apologies to my spell check now) Jami (she’s Canadian so I am obligated by law plus I do really like her), Lauren B and hesitantly Olivia, previews don’t do her any favors, are my top picks. They throw a wrench in and plant  Becca and Amber from Chris’ season because there wasn’t enough drama with crazy and now drunk Lace. Ben gives his first impression rose to Olivia so cue her this boy is mine attitude to crop up any time now. After a long night he gives Breanne, Izzy, Jessica, Laura, Lauren R, Meagan and Tiara the boot.

Now we start the season for reals. Time for dates and kissing and all the good stuff. First up group date where Ben takes  10 of them to school., In pairs it’s around robin of classroom competition to become his 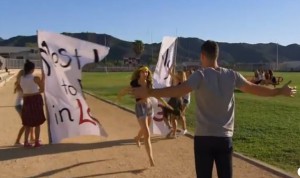 homecoming queen. In Science they had to make a volcano explode, Lace and Jubillee were gone and Jubilee was PISSED. Lunch was bobbing for apples. In geography they had to place Ben’s home state on the map and we learn these girls are NOT the smartest tools in the shed, gym class was basketball. Amber and Mandi were the last two standing and it was a hurdles race to be Ben’s queen. Poor Amber can never get the guy and Mandi wins the title. All the girls are super jealous that she gets to ride in convertable around the track with him for 5 minutes. Like this cements their love. At the cocktail party Lace is determined to get her rose and starts off the conversation with I’m not crazy I swear. RUN BEN RUN!  He doesn’t and she become normal for 5 minutes. To her it’s all about time and if she perceive she hasn’t gotten enough she will remedy that and quick. We learn more about Jubilee and her story. She was born in Haiti and adopted when she was six. Her and Ben develop a nice connection. He has a special plan for JoJo though. Brings her to the top of the building and kisses her. The force is strong with those two. All Lace’s efforts are for nothing and JoJo gets the date rose.

My girl Caila is selected for the first one on one. YES!  I almost screamed aloud when it was announced. 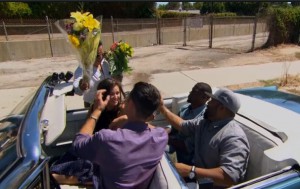 Because ABC needs to pay the bills they have Ice Cube and Kevin Hart plan the date and plug their new movie Ride Along 2. Of course the date was a road trip. The two guys were funny but I liked Jimmy Kimmel more. Sorry guys. Caila was a good sport about it as the guy stopped at random stores and tried to get Ben to buy condoms and whiskey. The end up in a hot tub store with a naked (probably not really) Kevin Hart in a hot tub with them. I saw Ben was checking out Kevin’s good a little to long and with a much to goofy grin on his face. Her reward for dealing with those Shenanigans was a nice dinner ALONE. The two have some nice chemistry and again THEY DID NOT EAT THEIR FOOD. A huge pet peeve of mine! After dinner was the customary private concert by some obscure artist. This time it was Amos Lee. No clue who it was Ben seemed to know and I’m sure Caila was pretending to know.

The third group date was insane. They end up in the love lab dressed in nothing but white tank tops and white booty shorts. After some retinal tracking to see if they find Ben attractive vs Sean Lowe, Um yes no 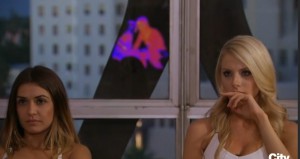 contest, it’s on to the smell test where Russian Shushanna finally speaks English and he tells Samantha she smells sour. That won’t give her a complex at all!  Finally they are put in a room hooked up to machines and have to sit real close to Ben while the other girls watch their body chemicals on a monitor. Yup no one will get jealous here at all. After they all get a chance to watch and silently seethe their scores are revealed. Shocking Sour Samantha scores the lowest and Olivia beats them all out with a 7.4/10 On to the after party. Single mom of two finally gets to tell him about her girls and he is on board. Honestly doesn’t mind coming into a ready-made family so good for Ben. Most would run away at the thought of one. Ben is ready to take on 2. He also spends some alone time with Olivia. Now Ben is doing something weird. He is basically announcing his top two girls and giving his rose out in front of everyone. Amanda and Olivia were his top two for this date. He ended up giving Olivia the rose. Amanda is devastated and now we will have to start widening doors for Olivia’s ego. 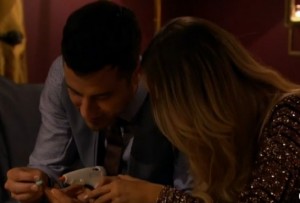 Finally cocktail party time. Ben wants to get to know the girls he didn’t spend much time with. Olivia has other plans and interrupts his time with cannon fodder #1. With a rose in hand everyone is mad. Lace is drunk again and still professing not to be riding the crazy train and Amber is back to whining about not getting any time with him. Same record different dance. She cried all Chris’ season too. Listen honey if you aren’t going to get your ass off the couch and demand time you 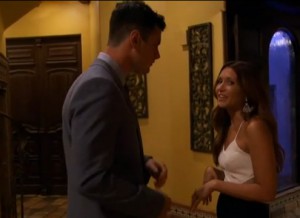 have no one to blame but yourself. You know how this works by now so STOP IT. He does pull Amanda aside and make some hair clips for her girls which was super sweet and seemed to put Amanda doubts at bay. On to the ceremony where Amanda gets the first rose. The first real drama of the season is when he offers his rose to LB and she pulls him aside and declines it removing herself from the show. Sent packing were the crazy dentist (and not good crazy like BB17 Johnny Mac) Mandi, Sour Samantha and Jackie. Bye ladies…I’d be sad but it’s too early for that.

So there you have it tons of crazy still left to play out and I can’t wait. Do you agree with Ben’s picks? Who are you pulling for. Comment below and let me know or hit me up on Twitter where I live tweet it east coast time!