The tensions are mounting in The Bachelor mansion and it’s only week 4. Even Chris feels the awkward vibes in the air as he comes in to tell them they are moving on to Las Vegas. All the girls are excited. Las Vegas Like OMG Best trip ever! Ladies your going a few hours away calm down. The twins are excited to be going home, its like a mini home town date for them. They have one hour to pack their stuff and go.

Once they get to Vegas and settle into their fantastic suite the date card arrives for JoJo. This has been a girl to watch, she hasn’t gotten a lot of screen time but when she does their chemistry is undeniable snagging a group date rose week 2. Ben’s plans for her include a helicopter ride where I’m pretty sure an intern was fired. They had set up a nice little table of champagne out on the helipad where the two drink up. 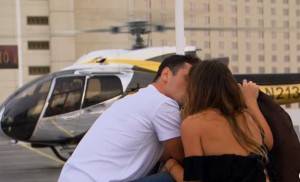 Then the helicopter arrives. The wind from the helicopter almost killing the two as the table and glassware all go flying. The two make out while taking cover behind the table.  Nice concept, not so well planned out. This sends normally confident Olivia from 0 to def com 5 on the jealousy scale. There is your usual kissing and making out in the helicopter and the two end up going to dinner where JoJo opens up about her past relationship.  By past I mean 5 months ago. She’s fresh out what sounded like a pretty serious relationship for her. He cheated on her so no so much for him though. Ben is his usual understanding self about her heart ache and offers up his rose to her. Lets hope she can put her trust issues aside and open up fully to Ben. They end the evening with some fireworks that all the girls can see and imagine them making out too. Smooth Ben Smooth.

With the first one on one over the show ceases to be The Bachelor and transforms into The Olivia Show. She is again chosen to go on a group date despite multiple side interviews saying she NEEDS a one on one to reconnect and get their mojo back since you know she killed it talking about cankles last week. Plus with Olivia on the group date it left the last one on one recipient at home and that is Becca which no doubt pisses Olivia off. With 12 people this date is huge and they end up at the Terry Fator show. If you don’t know him he’s 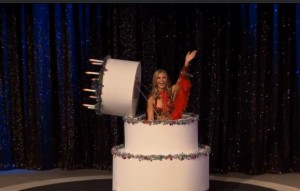 an impressionist and ventriloquist. The ladies are forced to come up with a talent to perform in front of 1200 people as his opening act. Cue your breakdowns of people who have no talent. Olivia on the other hand was confident in her show girl dancing abilities. The stand outs where the twins doing Irish dancing and Jubilee on the cello. Lauren H was dressed like a chicken and we had a hula hooper. The best was saved for last in Olivia who was pushed on stage in a cake where she burst out of it and did some awko-taco dance. It was awful. Ben tried his best to hide his horror, at least to her face anyways. Just blame it on the cankles Olivia, . Even Terry’s puppet was shading her on stage. She gets off stage runs to the Boyz II Men green room to have a “panic attack”  I think that should have come first, NO?  Rachel is the crazy sitter this episode and talks her down for cocktail party. Caila gets Ben first. Their first real-time together since her week 1 date. The nice girl turns Sex Panther on him and Ben likey, Ben likey a lot. Lauren H makes out with the puppet Little Ben during their one on one. Olivia finally gets Ben alone. She tells him how awful he was he tells her how great she was and blah blah blah. I can’t listen to Olivia anymore. Hayley interrupts and Olivia leaves 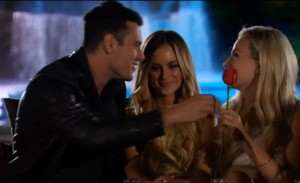 the conversation not feeling like she got what she needed and she just can’t go to bed like that. Ben is her husband you know, she needs to 400% feel like things are ok. So off she goes to interrupt Emily’s conversation. The second one is more awkward than the first. You can tell Ben is at the end of the rope with having to constantly reassure not just Olivia but he kisses her to shut her up. He ends up giving Lauren B the rose for the date sending Olivia into another tailspin. She let someone have the rose last week but two weeks just won’t do. Poor Amanda had to sit in between the awkwardly as he gives her the rose and kisses her.

The morning of Becca’s one on one a package arrives for her. She opens it and finds a wedding dress that she needs to put on for the date. She starts to panic, why I don’t know there are 14 of you left you aren’t getting married. Every season the dress someone or a group of someones as brides. Last season they had to 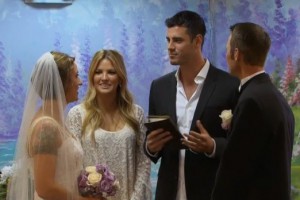 run a race in dresses for god sake. She is brought to a chapel on the strip to meet Ben who gets down on one knee and asks her if she’ll help him marry other people. YES folks. Ben is now ordained in the State of Nevada and some poor souls are being married by him. Becca gets to change out of the ridiculous dress and the marry a bunch of couples. Afterwards he brings her to the Neon Sign graveyard where the two have a very odd talk about her virginity. I feel we already went over this last season. You aren’t getting any Ben, end of story. She needs to be asking YOU if you are willing to wait. Becca thinks she is so much farther invested this year at this point then she was with Chris.  Apparently marrying strangers and sitting a glorified junkyard with nothing but a glass of wine is what makes her feel special. I bet she is just glad to kiss a man with lips. Of course she snags the rose.

It’s the morning of the rose ceremony and Chris Harrison arrives  to tell the ladies that Ben wants one more date with two girls. Horror and terror fill the girls….a two on one. They all know what that means. He

wants to take the twins out for the day. The time as come to split them up. Even they think it’s time. He brings them to their house where he can talk to each on their own and he meets their mother. His relationships with both are stalling but he has more chemistry with Emily than Haley. Their mom tells him Emily is the more dominate but once Haley opens up she’s all in. Unfortuntately time is not on anyone’s side here and he decided that he will send home Haley while she is at home. She has the support of her mom and 5 very fat dogs to get her through all this. Score one for production who has to spend 0 on flights to get her home! Emily returns in time for the cocktail party. 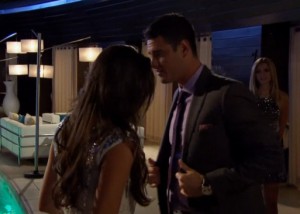 The mood is serious and the girls are blinged out in sequins.  I was overjoyed to see Jennifer snag him for a one on one conversation first but it wasn’t long before Olivia busted in on the scene. Ben allows it to happen, and I need to know one thing.  Can he not just say give me 10 minutes and I’ll be right with you? Why is it because these girls feel the need to interrupt sometimes deep conversations he is just forced to be duh ok? The girls talk about how disrespectful Olivia is while she bores Ben with her insecurities. She tells JoJo that she told Ben she’s falling for

it and that he is falling for her too.  Chris finally puts an end to the cocktail party and Ben has decisions to make.The first rose goes to Amanda. It’s time for the final rose and Olivia has yet to receive one. Is he saving the best for last again or is this the second week he’s subtly telling her I’m having doubts? Olivia receives the last rose and for the second time Amber is sent home along with Rachel. I really hope they have a psychiatrist on hand for Amber because she did not take it well.

Everyone is off to Mexico next week. Will this be the week that Ben finally sees Olivia for who she really is? Will Jubilee sabotage her relationship with Ben out of fear? The drama continues and I can’t wait. Follow me on twitter as I live tweet the episodes and don’t forget to check out our coverage of Celebrity Big Brother and Hell’s Kitchen!