The Women Tell All has to be my favorite episode of the season (apart from the Finale) I am always expecting great drama and most of the time I am sadly let down BUT not this time! After the normal filler we get down to the meat of the night. 17 of the ladies are back to tell us EVERYTHING. The first thing I noticed was the wonky placement of girls. Normally in order of “eviction”  but no we had Britt and Mackenzie between Ashley I and Kelsey and Ashley I and Jade between Carly and Britt when by rights those girls should have been beside each other. Producers most have known that things were going to get heated and they did in less than 5 minutes. Watching the highlight reel Britt is visible upset over the funny things Carly had been saying so right away Chris goes to Britt. She begs Carly to tell her why she pretended to be her friend. Carly said she didn’t pretend, but she didn’t want to create 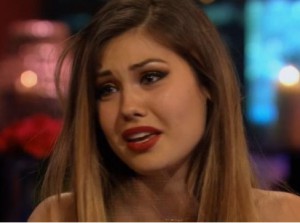 drama where there didn’t need to be any. They argue back and forth and finally Chris brings Britt up to sit with him. As Britt tries to generate some tears she tells us she believes she would still be there had Carly not soured him. Not be run over Carly comes to her own rescue and points out that Chris in his blog had said that Carly was the third girl to voice the same concerns to him. Both Ashley I and Jade had said the same things. Jillian jumps up to defend Britt to Carly and Chris has to tell her to calm down. Britt thinks that Ashley I misunderstood a conversation about her not wanting kids. She was also shocked and upset about the edit where they would show her conflicting views both on the children front and the Arlington issue. Carly maintains the whole time this was never an issue between her and Britt but her looking out for Chris whose major fear is that someone would get on that farm in Iowa and leave him. The whole time Britt is trying her darndest to produce tears that never came. I can’t handle fakeness anymore! 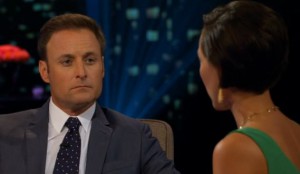 It’s time for a whole different fake…..KELSEY! She’s brought up to Chris and is shown her highlight reel. She is left feeling betrayed by the girls. She feels she was ready to move on with her life and all this has brought her back to the shock and despair she felt when her husband died. Chris asks if she can see, after watching the season back, why the girls felt that way. She says she could see that the girls didn’t like her because she seems condescending and used big words. Her interview with Ashley was raw anger and she is sorry for the things she says. Even Chris doesn’t look like he buys her story. Chris turns it to the women who are just chomping at the bit to confront her. Juelia and Megan can’t believe she’d use the death of someone to manipulate 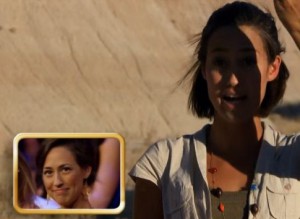 Chris. Samantha feels like she went home because of her drama and Kelsey says she feels bad. She asks for their forgiveness and that isn’t something that Ashley is ready to give. I can say the look on Kelsey’s face as she tells us that she is “up here” and Ashley is “down here” didn’t convey sorrow, she looked pleased with herself. She also tells Ashley that her not thinking Sanderson was real was despicable and both Britt and Jillian rise to Kelsey’s defense there. All in all, Kelsey is still so very fake, all her answers seems to be calculated and rehearsed, and I was ready for her interview to be over long before it was. 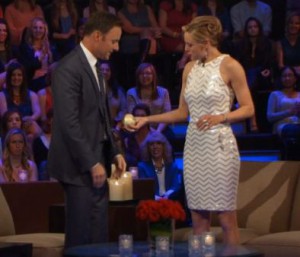 We break the heaviness with some comedic relief in the form of Ashley S. How I missed Ashley S. Her highlight reel was comedy gold. She walks on stage to see Chris and says nice to meet you. Huh  you’ve known him for months but OK. She hands him an onion and says the show has inspired her to grow them. The onion story is explained. Ashley didn’t think the trees grew real fruit so she thought it was onions pretending to be fruit. Mesa Verde is also explained. While Ashley looked a little nuts explaining what it was she is actually correct. It’s an archeological National Park in Colorado. Did the zombie date resemble that it’s a stretch but maybe a little. She goes on to tell us about the secret betting ring she found at the mansion (that was really the accounting department) Chris asks if that was the real Ashley. She explains it was hard for her to not be silly in front of the cameras. Will we see her on Bachelor in Paradise like Chris offered her.  I sure hope so. 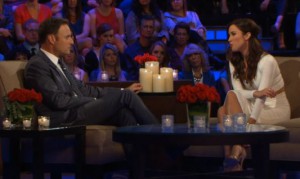 Jade and Kaitlyn are next to bring it back the reason we are here. Jade needs closure. She thought he had accepted her past when she revealed her nude pictures but was crushed to hear it disturbed him that there was such a difference in the Jade he knew and the Jade her family talked about. Was his deliberate mention of her photos not being the reason she was sent home  said to not hurt her feelings? She needs to know exactly why she was sent home. Kaitlyn like Jade left Bali feeling blindsided. She never expected to go home that day. She had let her guard down, told him she was falling in love with him, more importantly he said the same thing to her. Never did she think he would put her through a rose ceremony if he wasn’t feeling it. She got no sign that she would be leaving tonight. Like Jade she needs and deserves answers. Will both these girls get the closure they need?

Finally Chris is brought out to face the music and Britt is in her seat crying her fake tears, so Chris Harrison goes to her first. She asked to  go on stage and gave Chris a death hug and wouldn’t let go. When she finally could talk she told Chris she didn’t blame him for believing Carly, she duped her too but she was proud of him. Thankfully Chris was a man and came to Carly’s defense saying 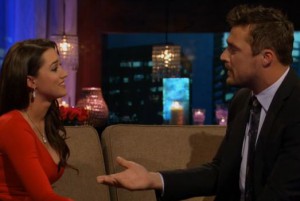 his decision was not made on Carly’s reveal at all. He would never base a decision on their relationship based on that. There were things between them that made him feel like it wouldn’t work and she was glad for that. Kaitlyn confronts him next but stays planted in her seat. She wants an explanation. A genuine answer as to why she was sent home. Chris true to form doesn’t have a good one. He says he was throwing darts at a board because he was falling in love with three women. When asked why he put her through that rose ceremony and didn’t give her the private time he gave Becca he admits 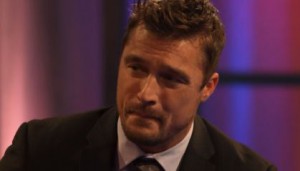 that was a mistake and he wishes he could have done that because she deserved it. I would have love her to ask why she told each of them he was falling in love with them. Jade comes up to talk to Chris next and she is demanding answers as well. She first confronts him on his statement that he was disturbed at the two different Jades. He admits that caught of guard would have been a better choice of words. He tells her again the pictures had nothing to do with his decision. Her next beef with him is that he said it was awkward to look at her photos with her. Why didn’t he say something at the time. He tries to explain that yes it was awkward but it was a necessary awkward to be able to move forward. Again a poor choice of words. It seems to be the same excuse we heard from Juan Pablo! Neither girl really got any answers and Chris moves on to the bloopers which consist of monkey’s gagging, Whitney’s dog humping her toy, stray panties and Jimmy Kimmel footage. Chris has also written a book that drops in May so keep your eye out for that too.

Do you think anyone got the answers they were looking for, and do you think the ladies are satisfied? Who do you think will get the final rose? Comment below and let me know what you thought of this episode! Don’t forget to join Michael and I on Tuesday’s at 7pm EST on ourROSES page where we break down everything that happened and let you know what we think!  Don’t forget we are also covering King of the Nerds, RuPaul’s Drag Race, Hell’s Kitchen, Survivor, Amazing Race and RHOA, RHOBH and Vanderpump Rules