We left off last week on a cliffhanger, which I hate but I can only hope we can get back on track this 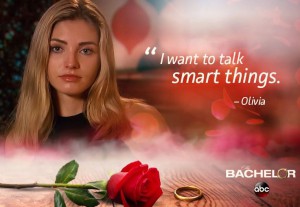 week and it hasn’t disrupted the rest of the season. We pick up the conversation between Ben and Olivia. He tells her girls are saying things and she say well I can’t win. I had a target on my back for getting roses and being aggressive. I pull back and they wonder why I’m not social. I don’t have anything in common with them, they want to paint their nails and braid each others hair. I like to read and think and talk smart things. Really Olivia? Your brain is not what is putting them off. Well maybe the exception to that is Emily. They are all college educated women. They can just see your full of shit. She tells him she’s not shocked by it all but she can handle it. He brings her back into the room to start the ceremony. I’m sure money exchanged hands once the cameras stopped filming since there was probably money put on whether or not she’d be sent home. Olivia challenges them all to  The final rose comes down to either Emily, who is bricking it, for tattling on what a meanie pants Olivia is and Jennifer who has had little air time and even less chemistry with Ben. Emily is given the rose and we say good-bye to Jennifer. I wasn’t surprised, I expect to see Leah, Emily and Olivia next on the chopping block.

Now to week 6 finally where the girls are in the Bahama’s. Chris tells the girls once in the suite there is a one on one, a group date and a dreaded (for real this time) two on one. Leah finally gets some air time but only to whine about she needs a one on one, she’s had no time with Ben. She is pissed to find out that not only does 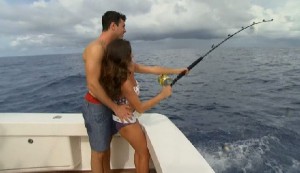 she not get it, nor does Olivia, the only other person without an alone date but Caila gets it. Ben’s says it’s because they didn’t get to spend the whole day alone because of the ride along with Kevin and Ice Cube. He needs to find out what’s under her sex panther surface. He takes her out on a boat fishing. The two have fun checking each other out in their swim suits and Caila “catches” a fish. Ben makes her kiss it.  Um ew gross NO. I won’t kiss a nasty fish for no man! At dinner Ben needs to get deeper into Caila’s soul. Apparently she smiles too much and that is just wrong. She has to have some inner demon that she just isn’t telling him about. What ensues is the most confusing conversation in Bachelor history, and we had Juan Pablo as a Bachelor so that is saying a lot. She says she’s not ready to open up and he’s forcing her to be vulnerable. to him. She tells him she feels loves him but doesn’t know why she can’t share.  She also things she might hurt him and he is confused but everything.She is making him question whether he should give her the rose.She tells him she knows she’s in love because he makes her feel understood and that is all she needs.She understands him and they are all a great big ball of understanding. I don’t understand but Ben seems to understand and she got the rose.Leah spends the whole day crying at the hotel wondering if she should even continue on.

It gets even more bizarre on the group date. But before that we learn that the 2 on 1 will be Emily vs Olivia and we all do a happy dance. Back to the date. Back to the boat where Ben thinks it would be great fun to have the girls swim with dophins…no…..sharks…no….whales…nope….Freaking Pigs. What the hell Ben.  While the girls try to swim with them it’s more like being chased by them because the babies are cute but the momma’s are 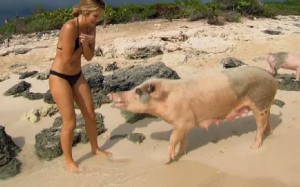 pissed the girls think the babies are cute.After spending a lot of time with Lauren B, Ben tries to have some time with each of them as they are in the water but everyone is just off. He needs the night to go better. He s starts of with Becca who lets him on the fact that he was a bit over attentive to Lauren B and it kind of killed the mood with her and the other girls. Most painful conversation was him and Amanda. Love her, great girl but the two of them together is hard. They both use the word like way to much. It’s like watching two 12-year-old valley girls talk. Leah has spent the entire time in the Bahama’s questioning whether she should be here. Is Ben even into her and she takes matters into her own hands tonight. The desperation with her is real and she tells Ben that Lauren B is not the girl  she is portraying to him. What the hell Leah. Did you miss the We All Hate Olivia Memo? It all comes out of left field for him and for us all. After crying about him needing to get to know you,m spending you time talking about Lauren is just plain stupid. Still reeling from the Olivia craziness he confronts Lauren B who has no idea why anyone would target her. She can’t figure out where it’s coming from and returns to the girls upset. Leah totally denies it being her that said anything but she’s a terrible liar.What! Your name was brought up? Well I didn’t say anything. BUSTED Lauren. No one said you did! Liar Liar Pants on Fire. Amanda is the lucky one to walk away with the group date rose this week but I think Lauren deserved it. Ben quickly excuses himself to rest up for his cage match….errrr I mean 2 on 1 with 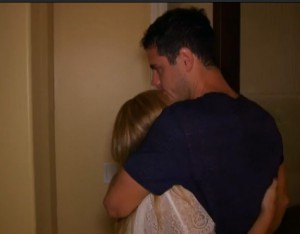 Emily and Olivia. While the girls sit and wonder why Leah would do such a thing she has snuck out to get more time and try to turn him against Lauren even more. Leah why not try to show him how great you are instead of being so negative. All this does is frustrates him. He doesn’t really buy into the crap she’s saying and is irritated she didn’t use this time to focus on them. He doesn’t think feel right between them. I guess her plan backfired because he sent her home.

The weather is stormy, a perfect setting for the two on one showdown that is about to go down. After a windy boat ride they sit and talk about in the rocks in the middle of no where with the ominous single rose sitting there. He wastes no time and takes Olivia first for their private chat.  They rehash last week and she tells him that she’s ok with things. She is who she is. An introvert, someone who likes politics and religion and she’s not going to force herself to be friends with people she wouldn’t be friends with in real life. She also tells him she is in love with him. His talk with Emily was much less 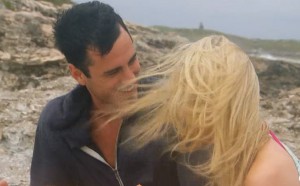 deep. She is tells him she is there for him and is excited for how things are going. The two share a sweet moment as they wind keeps blowing her hair and they laugh at how he can’t even see her face. Ben grabs the rose and asks Olivia to take a walk sending Emily into a rage thinking she is gong to get a rose. He tells Olivia that he appreciates how open she was with him today but he can’t reciprocate the feelings she has for him. Then because The Bachelor is cruel and loves to make girls cry he leaves her in the rocks and rain where she has to watch him give the rose to Emily a few yards away. They leave her there stranded on the beach. 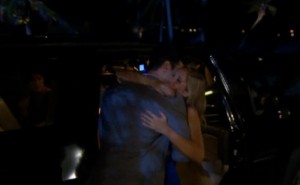 Ben has had a rough few weeks and just doesn’t have the energy for a cocktail party so he cancels it and we go straight into the rose ceremony. The Lauren’s are freaking out. They need to talk to Ben. Becca knows whats up when Chris walks in the room. He tells them there is no party tonight. With only 3 roses to give out the final one comes down to Lauren and Lauren. Did Leah really get into Ben’s head? She didn’t and sweet Lauren H is sent home. With the surprise exit of Leah, Lauren’s exit came sooner than expected. I think she’d still be there otherwise…until next week anyways. With a simple good luck she makes a graceful exit. Bye Lauren H  I will miss you.

I have to say I was pretty disappointed at the 2 on 1. I expected claws and cat fights. Olivia and Emily failed on that front so hopefully we get some good drama next week. Don’t forget to watch Jade and Tanner’s wedding on Sunday night. I’ll be away so I won’t be able to watch it live but I will tweet it on Monday or Tuesday so don’t forget  to Follow Me!