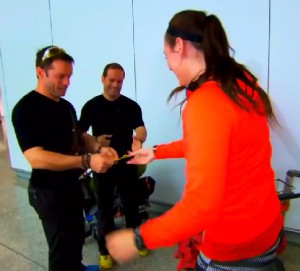 Luck was a lady for Sukhi and Jinder last week as they were spared elimination because it was a non elimination leg. Natalie and Meghan for the fourth time in a row leave Macua, China first. Everyone is on their way to the Yukon Territory. It’s a nice equalizer to start our journey back to Canada. Once they land in the Yukon they must drive their Chevy Silverado (shameless sponsor plug) to the sky high ranch. This leg is important for Natalie and Meaghan because they HAVE to get rid of the express pass. They say they will use it as leverage. The twins believe they will get it because they have been working with them in China and they are all athletes so they have a bond. Pierre and Michel have proven to be a strong team, they have often taken themselves from the back of the pack to the front of the pack so these girls really need to be smart when deciding what to do. As soon as they meet up at the airport the girls hand it over to Pierre and Michel (so much for thought and strategy) but they have conditions. One is they can’t U-turn them, and they must U-turn a team that is close behind them and boys agree.  Everyone is shocked that they would give to them and frankly so am I. I am all for throwing that express pass away on a weaker team. All these teams have proven themselves but I would have given it to Rex and Bob. While I absolutely adore them they have proven they can crack under pressure. If you give the twins any chance to take a lead and they will get so far ahead you won’t be able to catch up. The twins  are strong, smart and calm and on this race it’s a deadly combination. Who would you have given the express pass too? 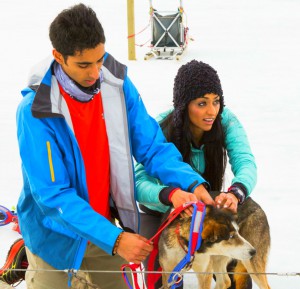 After landing in Yukon Territory teams make their way to the Ranch where they find the clue to their Detour. They can choose from two traditional Yukon activities Ride A Sled or Make Your Bed.  In Ride a Sled they must select a team of three dogs, run 1.5KM, find the right harnesses for their dogs, correctly harness them up to their sled and each team member must do three complete laps around a frozen leg course. In Make Your Bed teams must grab 2 heavy packs, run to a campsite in the woods and set up a camp site exactly like the example provided, while thawing a block of ice holding  key to a chest. Once the judge deteremines they have set up it up correctly they will get the next clue. Finally a Detour I could do and not die! Well the running might almost kill me but I’d survive. Working with 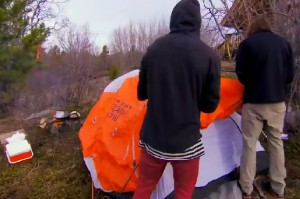 animals is always a risky thing to do but you never know how picky the judge is gong to be and if you aren’t detail oriented this challenge could prove fatal to your race.  Mickey and Pete, Rex and Bob and Natalie and Cormac all choose to make their bed. Of course Rex and Bob squabble but its just endearing to me now. Mickey and Pete are in their element. This is what these boys do, they joke around with Nicole that she can stay in their tent and Cormac is not loving this conversation. Everyone else is at the Ride a Sled challenge. All the harnesses have the names of their dogs on them so they have to find the correct ones. Both the Oympians and the Twins forget the names of one of their dogs and have to do the 1.5KM run back to the sign up to get the name. Once their the twins decided they aren’t running back and go over to the tent challenge. Sukhi and Jinder have a hard time harnessing their dogs and are begging for help from Ryan and Rob who have no troubles with the challenge. They just tell them to go look at the dogs already hooked up and figure it out themselves. All the teams are tired of being asked for help by them. They eventually figure it out. Audrey is also confused by the harness but they get it. They have bigger issues. One of their dogs run away. Once they get it back and harnessed up their dogs don’t want to move. Let Alain and Audrey tell you why it’s risky working with animals! Mickey and Pete are first out of the tent challenge and Ryan and Rob are first out of the sled challenge. I know it’s stupid to work with animals but for the fun factor I would have totally done Ride a Sled. What challenge would you have chosen?

Sukhi and Jinder now have to complete a speed bump while everyone else is on their way to Grey Mountain.  Sukhi and Jinder have to hitch up a 20 foot cargo trailer to their truck and drive it 12km. Once at the destination they have to reverse it into a spot with out knocking down any of the cones set up. It’s not a particulary difficult speed bump but it is time consuming and there is a reason you need a special license to drive larger vehicles, it does take some skill. They get it hooked up and to the spot. Sukhi tries to back it up and has some difficulty, Jinder takes over and they knock their speed bump out of their way!

Once at Grey Mountain they recieve their next clue. It’s the Roadblock. Everyone must decided which partner has the steady hand.  They are performing biathalon activities. They must ride a fat tired snow bike 1KM then shoot 5 targets with a rifle.

Each rifle only has 5 rounds so if they miss they need to get back on the bike to another 1KM to get another 5 rounds. Alain shocked everyone (especially Audrey) and got all 5 targets on the first try. She isn’t buying him a gun anytime soon. Ryan was out quickly after three tries and so was Natalie. Those girls can do anything. Sukhi hit 4/5 targets on her first try and was out pretty quickly, teaching Jinder he better not mess with her. Pierre had little trouble with it as well. Pete, who has hunted since he was 4, you’d think would be one and done but no! It took him 8 tries. Nicole and Rex had the hardest time on this challenge. While Rex was hitting targets some of the time, Nicole was finally hit 1 target on her 18th try. Rex as he’s biking for more ammo is screaming Who Designs These Torture Tests………..SATAN! I’m sorry but this clip played all week long as the trailer for this show, and I laughed out loud EVERY TIME.  Rex and Bob just can’t be eliminated. They are my comic relief, this race would not be the same without them. Rex and Bob are finally on their way and Nicole is still trucking. This girl does not give up! She exhausted, she’s breaking down but after 22 tries she finally completes this roadblock. My hat is off to Nicole. I would have given up and taken a penalty, my sanity is not it. Would you have stayed as long as Nicole? 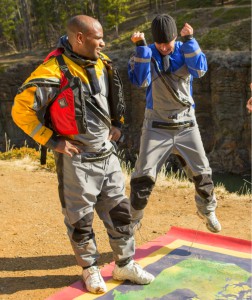 Once they complete the roadblock everyone is on their way to Chadburn Lake Rd. The must portage down the river following a marked path, then canoe through Miles Canyon to the 5th pit stop on The Amazing Race Canada. Meaghan who broke her hand 4 days before the Olympics this year can barely hold the canoe. We have seen hand taped at various points of the race because it still hasn’t healed and this is the first time in all these physical challenges she has every complained about it.  Sukhi and Jinder can’t figure out which way is down river, and Rex and Bob are squabbling again. For the first time this season Natalie and Meaghan are not first to the mat. Alain and Audrey are team number 1. They have not only bumped the Olympians from their gold medal position they did it starting second last. They have also won a trip for 2 to any sun destination that Air Canada Rouge flies and $Ryan and Rob hold steady at close 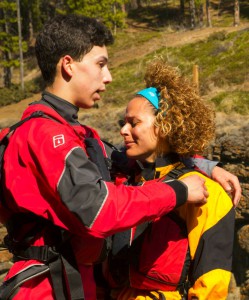 number 2. Still on the podium are the Olympians. Sukhi and Jinder despite starting last and having to do an extra challenge are in fouth, followed by the twins. Mickey and Pete  are team number six, and Rex and Bob fall back to number 7. While everyone is checking in poor Nicole is still shooting. Finally we see her emerge from the woods. YES despite everyone else already being checked in they still made Nicole and Cormac portage down the river. That is how hard core TAR Canada is. As the last team to arrive Nicole and Cormac are eliminated from the race but not before gaining the respect of everyone watching her. THIS is how you run a race. She never once complained about her age or whined about doing challenges DAVE from TAR ALL-STARS. She ate her snake, jumped from planes and rode a bike 22km’s to complete a challenge. Find out what Nicole was thinking throught this leg of the race here.

When I found out we were returning home after only 2 legs I was a little disappointed but I think the race is harder on home soil. Yes it’s easier to get around, everyone speaks  the language for the most part but the challenges more then make up for any language barrier and culture shock. These were some of the most physically demanding challenges yet. In China they jumped off a tower, played cards, and learned a dance. But compared to what they had to do in the Yukon is seemed so easy. What do you think of the race returning to Canada? Comment below and let me know what you think.