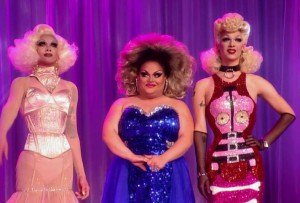 Here we are, hunties! After three months of watching drag queens from around the country battle it out in the hopes of becoming America’s Next Drag Superstar and lots of drama, tears and lip syncing, we have arrived at the finale of season 7. I’m a little sad that it’s already over but the grand finale did NOT disappoint! Either Ginger Minj, Violet Chachki or Pearl will become America’s Next Drag Superstar and receive a $100,000 check. Which one wins it all? Read on to find out!

We are introduced to all of the queens from season 7 in the order that they sashayed away. I must say that Sasha Belle looked gorgeous. Max came out looking like she always does… this time serving Lucius Malfoy realness on the runway. I’ve gotta give a shoutout to my Tennessee girl Jaidynn who looked FIERCE as ever! My girl Katya didn’t disappoint either! Special mention goes to [Laguardia. Newark.] Kennedy whose hair was as high as the heavens! Finally, our top 3 sashay down the runway and all three of them look absolutely stunning and definitely deserve their spots at the grand finale.

RuPaul makes a grand entrance and it is now time to get this show started! She mentions that this is the biggest finale turnout EVER with 60 queens from past and present seasons under one roof! Ru tells us that this year, things are being done a little differently. She STILL has not made her mind up and the final three have to lip sync for their lives one last time to songs specially created for each of them! (For the record, Ru already had her mind made up… I think she just loves putting the queens through hell and back! 🙂 ) 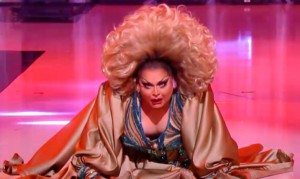 First up in the lip sync is my favorite glamour toad Ginger Minj! She never has been one to disappoint in a lip sync and this time was no different! She took us ALL to church with this performance. She prayed and slayed us all! The energy in this performance was enough to make RuPaul herself flood the basement! After Ginger’s performance we are shown a look back at all of Ginger’s best moments from the entire season. RuPaul sits down with Ginger and asks if she [along with the Bitter Old 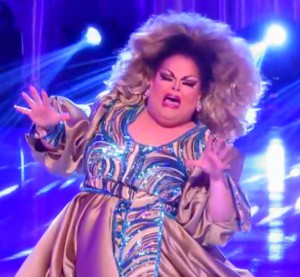 Lady Brigade] regrets throwing shade at the younger queens all season. In true Ginger fashion, she says she is a big girl and that no matter which way the light hits her she’s going to be throwing shade in one direction or the other. Ginger admits that growing up in a southern church-going family, speaking her mind was not encouraged and drag finally gave her that voice. Ru shows us a montage of people who are rooting for Ginger to win including her sister, John Waters, her mom and … HER DAD! I was completely floored by this. After years of having no relationship, it looks as though Ginger and her dad can begin the path to reconciling. He expressed his love and support for her and what she does. My eyes leaked a little bit. 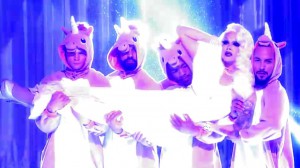 Next up is our favorite sleepwalker of season 7… Pearl! How appropriate is it that she would be lip syncing to a song about sleepwalking? I liked the performance and it really fit her! She definitely 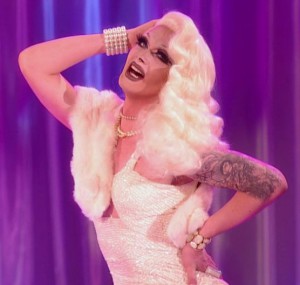 has earned her spot in the finale. That being said, I didn’t really feel as much energy in this performance as I did Ginger’s. We are now given a look back on Pearl’s big moments throughout the season… and what a transformation she went through! Ru really did light a fire under her ass! We are also shown a funny little clip on the Curse of Pearl: anytime a queen crossed Pearl, they were immediately sent home. We are shown videos from Pearl’s family and friends who support and wish her well in the finale. Ru asks Pearl what she would do with the $100,000 check and she says she would buy some wigs because she’s tired of her thirsty ass wigs. 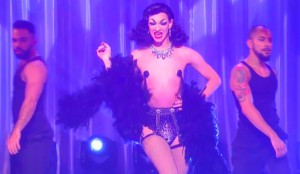 Our final lip syncer is Violet Chachki! Holy sh*t! I hate to admit it but Violet KILLED this tango vogue. She brought the sex appeal, she whipped out the nipples and bared it all. Come through! I have always been a Ginger Minj stan, but I am also completely impressed with Violet’s 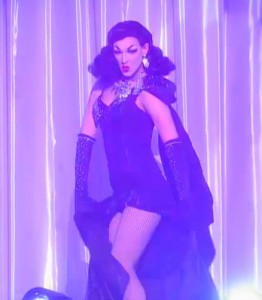 looks and talent! Tonight was no different. We are shown a retrospective of all of Violet’s finest moments from the season, including her reversible tartan jumper from the first episode, to the RIDICULOUSLY cinched waist from the “Death Becomes Her” runway. I want to address a fan question that Violet received. She was asked “What would you tell a teenager who wants to do drag, but is afraid of how their family and friends will react?” Violet says that she used to do drag in her bedroom with door locked and would sneak around until she was comfortable to do it front of her family. I think her message was to do what you want to do, and become comfortable enough with it yourself before you reveal yourself to you family and friends.

It’s now time to catch up with all of the eliminated queens of the season! Kandy Ho apologizes to Tempest for calling her old, and then turns right back around with more shade! Jasmine Masters’ most exciting moment of the season was meeting Kennedy, whom he has idolized for a long time. She mentions that Patti Labelle 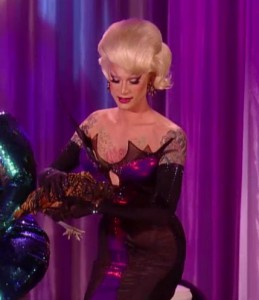 inspired her to do drag and is everything to her. Jasmine is given a special message from Patti Labelle who says she loves her so much! Ru said that Jasmine needed this extra pick-me-up due to the vile hate that she received on social media. Ru says that social media has recently turned more dark and hateful and that “unless they’re paying your bills, pay them bitches no mind!” Jaidynn, who still has not come out as gay to his family but is open about her drag (seriously, girl, they know you’re gay) is shown a special message from her mom that she loves her no matter what! Miss Fame even brings a special guest to the stage… a CHICKEN! Trixie Mattel treats us to a little RuPaul impersonation, which was funny. (and she’s asked to sashay away… AGAIN!) Katya is STILL as funny and twisted as ever and I 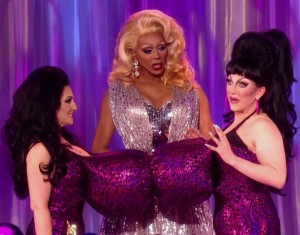 love her. She says she wants to tackle Ru to the ground, stuff her entire wig into her mouth and have Ru pee on her. Have I mentioned Katya is a little demented? LOL!

It is now time to announce this year’s Miss Congeniality, the fan favorite of 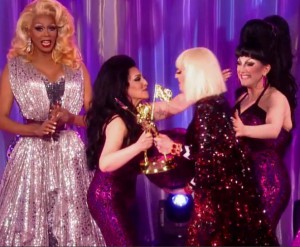 the season! In an homage to my favorite lip sync of the entire season, last year’s Miss Congeniality BenDeLaCreme comes to the stage… conjoined at the boobs with none other than Michelle Visage! This year’s best-in-show is KATYA! Personally, I am so GLAD she won this because she deserved it. Her crazy antics and continuous humor made her a lock for fan favorite! 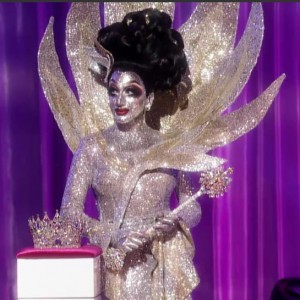 Now, the moment we ALL have been waiting for… it is time to announce America’s Next Drag Superstar, the winner of RuPaul’s Drag Race season 7! Our top three queens come back out to the stage for the big moment! Reigning Queen Bianca Del Rio joins them on the stage to pass the crown onto the new Queen. AMERICA’S NEXT DRAG SUPERSTAR and the winner of $100,000 and RuPaul’s Drag Race is… VIOLET CHACHKI! Condragulations to Violet on a spectacular performance this season and for a well-deserved win! Violet takes a turn down the runway as the new reigning Queen with her scepter. With that, RuPaul’s Drag Race season 7 has come to a close! See y’all back here next year for season 8! 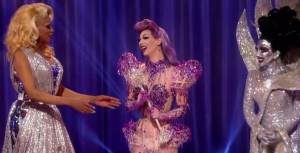 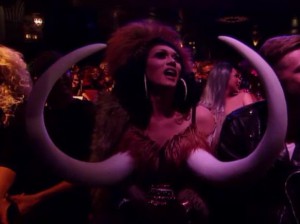 A shot of the audience… HASHTAG ELEPHANT TITS!

I have enjoyed recapping Drag Race for my first time and thank you all for reading and for your comments along the way! Be sure to follow YRR for awesome coverage of all your favorite reality shows! I’ll be back in 3 weeks as I take over blog recapping duties for BIG BROTHER 17! And don’t forget to check out my Hell’s Kitchen recaps as well!