Ding Dong the Gremlin is dead, which Gremlin? Rachelle of course.  The Sloppy Seconds are happy and Sabrina is devastated.  Neda comforts her as she breaks down in tears. Sabrina get your head in the game. You are still here and you have an HOH competition to win. Neda is feeling the best she 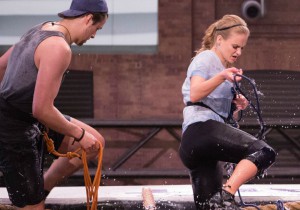 has so far, even her wedding wouldn’t compared to being Final 5. She thinks the only thing to top it is winning.  We left off with the On The Ropes competition.   The poor house guests are numb and shivering as they untangle their ropes in a pool of freezing cold water. I flashed back to when Rachel went against Angela in the Opposite Worlds Duel. This challenge doesn’t seem of hard but when you struggling for breath and freezing cold it’s a whole new ball game. We quickly see that Neda and Sabrina are out of this challenge. Jon and Heather are making their way through at roughly the same place. The players reflect to the times in the game when they were “On The Ropes” so to speak, Neda thinks back to when the First 5 ruled the game and she was in jeopardy. Jon knew he was quickly finding a way out the door Day 36 when Kenny refused to work with him. Poor Heather has felt insecure the entire game, especially since Day 17 when  Ika put her on the block and then Rachelle did it again a week later. Then there was Sabrina who ran the house for the first 5 weeks until Day 31 when Canada threw her up on the block with Andrew.  Heather and Jon are still neck and neck and everyone has their eyes opened to what a threat the Heather actually is. They have finally realized she is not the dumb, weak blonde they took her for. Although it was close, Jon takes his second HOH of the season. The Sloppy Seconds rejoice.

Neda now realizes that Heather needs to go. She is way too much of a 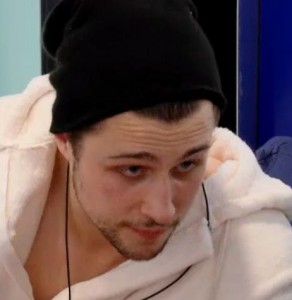 competition threat for her to keep her in the game. It’s a hard move for Neda because she likes Heather, but Neda’s in game mode and is taking chances. Jon and Adel have the exact same thoughts. Heather performance in that HOH has the whole house spooked. Even Sabrina is trying to work that same angle. Jon also thinks that if Heather had won, her big game move would most likely have been to take him out. He knows Heather isn’t afraid to do what needs to be done. Neda begins to bond with Sabrina more both for jury votes and in case she needs to work with her later in the game. She gives her little bits of information about their game plan in hopes that Sabrina will trust her. Another part of Neda’s strategy is to make the boys believe that evicting Heather is solely the boy’s idea. Part of this strategy was to bring up Adel’s name so Jon things he has to do some convincing. Brilliant game move because now if she ends up in the final 2 she can truthfully say Hey I wanted Adel up that week, and hopefully secure a jury vote. 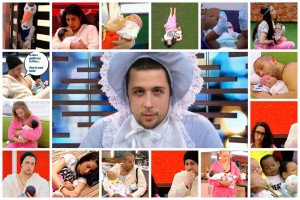 Big Brother never leaves us bored, we have to give them that. This week it was BABIES! Yup you heard me right. Screaming, crying and cooing babies. After Jon’s HOH win they all got drunk on his booze and Big Brother Stork snuck in and left a basket of screaming babies to wake them up very early. While Jon and Neda were clearly unimpressed with the situation, Sabrina, Heather and Adel faced their task head on. Neda I love you but WOW you are clearly not ready for motherhood. I am sure that Cigarette Butt Kalantar agrees with me! Neda was carrying her by her feet and head, plugging her ears when it would cry. I will give it to Neda that she probably did have the loudest baby in the house. This challenge was so funny to watch (with the sound off) Jon and Little Jon did some bonding til the screaming got to be too much. Poor Jon, he left that baby in a sitting position the whole time regardless of whether he was laying down or being cradled. Sabrina was a doting mom to little Marissa Rachelle,  it was a nice distraction for her after losing Rachelle. I always did find Sabrina caring for those in her alliance and for Rachelle, so I wasn’t at all surprised. Heather was so cute with little Sebastian. Singing to him and talking to him. I think 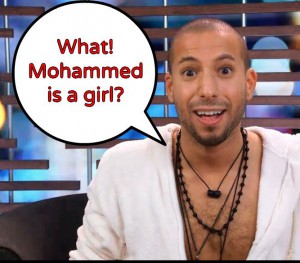 Heather would make a great mom. Then there was Adel. A doting dad to baby Mohammed until he changed the diaper and Mohammed became Yafa. His reaction to having a girl was hilarious. I am sure when he gets home his fiance Abbi is going to want to make a million babies with that boy. He was such a good dad.  They gave their babies back and they were given the results of who was the best parent. No shocker Adel was the best with only 9 infractions. Shockingly Neda came in 2nd with 8. Most shocking was Jon lost with 20 infractions. He apparently didn’t realize you need to feed the baby. Big Brother rewarded them with a baby shower complete with cupcakes and punch and champagne. Jon was given a baby costume to wear until Thursday. I am finding it very hard to take any game talk seriously from a 6 foot tall  man dressed in a diaper and bonnet with a soother around his neck. 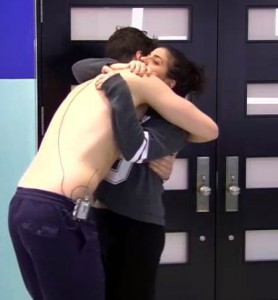 Back to game we go now. Sabrina and Jon have a little chat. Jon tells her that he is putting her on the block. No surprise there. He tells her that she will strictly be a pawn this week, and Sabrina’s mouth just about hits the floor.  He tells her that he won’t say who he is putting on the block but that person is definitely the target this week. Sabrina just need to play up that she is going home until eviction so the pawn doesn’t know anything. Jon needs Sabrina’s trust just in case she makes it to final 3. Neda has to calm down Heather’s nerves after Sabrina makes Heather think something isn’t right. Neda doesn’t want Heather to know she had a hand in getting her out of the game. Neda is definitely managing her jury like a champ. 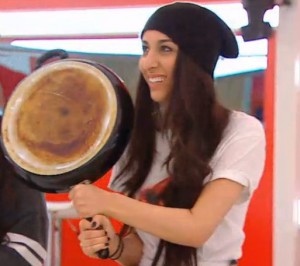 Everyone is sitting around, Jon is in the Diary Room and the lights start blinking. Everyone is wondering what the heck is going on. Then “Ika please put on your microphone”  is said by Big Brother. Everyone freaks. Neda starts screaming I didn’t want you out. Sabrina is ready to self evict because she doesn’t want to face Ika’s wrath. Then screaming and babies crying comes through the speakers. Everyone is on edge. Neda has a frying pan ready to kill any ghosts. Then it all goes quiet. Everyone is still spooked and sleeps in the bedroom together. and are woken to a creepy voice screaming SABRINNNNNNNAAAAAAAA! more flashing lights, flapping bat wings sounds and little zombie doll heads are lit up in the mirrors. The house guests had a rough night. The next day they are summoned to the living room and Big Brother tells them that they have been patient with them so far but last night the patience wore out. They are tired of their disobedience and treated them to a night of terror. Big Brother shows them footage of ignoring the rooster calls and generally back talking and ignoring Big Brother commands. I think they learned their lesson.

Going into the nomination ceremony everyone feels great, no one thinks Jon is going to nominate them except Sabrina, but she “knows” she is safe.  Jon true to his word nominates Sabrina and Heather. He explains that Sabrina is the only one

left in the house he is not working with and Heather is just a pawn. Jon says he already nominated Adel as a pawn once before so Heather was really his only choice left.  Baby Jon closes the nomination ceremony and Heather is MAD! She bypasses the customary post nomination hugs and run crying into the bathroom. She is totally blindsided and wishes that she had been told beforehand.  Heather regrouped and decides she is going to win the POV and the next HOH  and take herself to the final three because no one else is going to do it for her. Good Heather. Take that anger and channel into your competitions.