We have certainly had an interesting weekend haven’t we?  Big Brother tells us that we decide the nominations then turns the feeds off all weekend so we can’t see the aftermath of our destruction. The First 5 are very pleased with the results of the vote. They think that they have control but Arisa squashes their comfort. Immediately after Arisa announces that Canada is HOH, Andrew 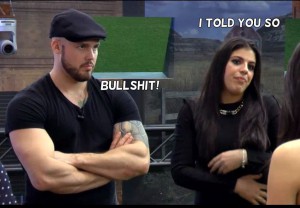 cries bullshit. I think he might be nervous. Sabrina says I told you on the couch. We all know that means she threw out about 20 theories and that was one of them.   All the First 5 are as Kenny would say “shitting a brick”  They are well aware that they have had control over this game since Andrew’s HOH week 2. Andrew knows he’s going up immediately. Sabrina is crying, she feels she has done all the work for the alliance and it could come back to haunt her. She has dipped her spoon into too many pots to come out of it clean. Sarah is nervous as to how they are coming across as an alliance to Canada, but she is trying to calm the emotional storm Sabrina. She doesn’t want her losing her mind before they even know who is nominated. For the third week in a row Adel has watched an alliance member go home.  He always takes a moment of reflection afterwards. Adel retreats to the have not room, this time he feels alone. After Kyle he still had Paul. He had secured Ika before Paul left, but this time he has no one left. He reflects and has some laughs over Ika shredding the letters. He is loving the chaos that Hurricane Ika left behind after her rant. 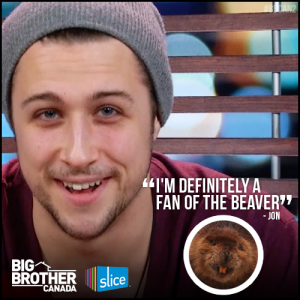 The HoH room is revealed to the house guests. This time they have some hoops to jump through. They had to sing our national anthem. I honestly think they were just happy they got to sing without production stopping them. They get the room for an hour a day when the anthem is played. It is totally Canadian themed. Red and white color scheme. Plaid pillows and a plaid HOH robe. Canadian food like poutine, ketchup chips, maple syrup and of course BEER. There are stuffed wildlife all over the place, geese hanging from the ceiling. Every Canadian stereotype you can imagine is in that room. Jon is a fan of the beaver. Take what you will from that. 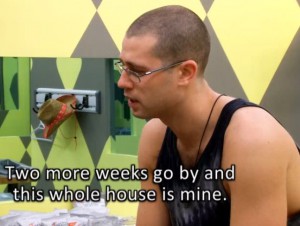 Sabrina’s paranoia is on high alert. She runs around asking who they think Canada will put up. Arlie is telling her exactly what she wants to hear. He says she’ll be OK and basically says he thinks what she thinks. The nominations would be Allison and Andrew. He is totally lying but you can’t stir up the emotions in that girl. Kenny worries that hiding his sexuality is going to affect him now. He hopes that Canada sees he isn’t hiding who he is, that it’s strategic only.  Arlie is using this opportunity to decide  what side he wants to stick with. Does he want to stick with the First 5 or does he want to flip sides. Arlie has a dialogue with Canada in the storage room. Sabrina is cracking up, she can’t handle the emotional part of the game. He hopes that nominations are between Kenny, Andrew and Sabrina. He’d be happy to see any of them go home.  He sort of had a  reverse MacBeth moment repeating he’d have no blood on his hand and that in two weeks they would not be able to stop him. I kind of found the whole conversation creepy, but I’m sure he was “acting” and it will not be the last we see of Arlie. It was a a pretty stellar performance. 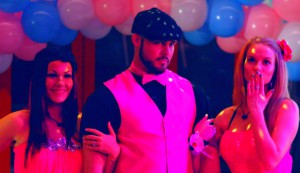 We get a have-not competition this week. It was called the BB Prom. They were split into 4 teams. Orange team was  Kenny, Allison and Neda. Seafoam team was Sabrina, Rachelle and Arlie. Pink team was  Andrew, Heather and Sarah, and Yellow was Adel and Jon. Those two were hilarious! They come out of the bedroom holding hands. Adel thinks Jon is the ugliest prom date ever. Is he blind! Jon has been looking so hot lately. Slop weight loss has really done his body good. The girls get corsages and Adel gets on one knee and gives his Jon his. They have to dance for their food. One person is the dancer and the other two have to guess what dance is being done. They get 10 dances and 1 minute to guess. Sabrina was up first. She said she would get this because she was dancing since she was 5. Was she dancing in front of people. They did OK and got a score of 5.  The most disturbing part was that Rachelle didn’t know what vogueing was.  Orange was up next and Kenny was the dancer. All Kenny’s dancing looks like stripping but they got a decent score of 6. Pink was up next with Andrew hitting the dance floor. He got all but one, The Hora! Can’t fault 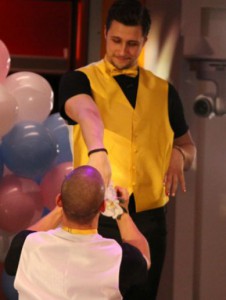 him there. And then there was Adel. Oh Adel. I love you, Canada loves you but boy you can not dance.  He passed on pretty much everything, thought the macarena was the chicken dance and ended with a score of 2. Jon and Adel are Have-Not’s for the week. Jon is livid. The pink team got treated to a steak dinner, and Neda is talking Jon down off a ledge. They cued up a montage of this season’s slop meltdowns. It was hilarious. Sabrina crying over a cookie and Jon banging he head on the have-not room ceiling were hilarious. Nothing a great at the “My whole life is gourmet” melt down by Gary season one, but almost everyone on slop manages to lose it at least once. We will see how Adel does his second week in a row on slop.

Jon and Neda now decide it’s time to start playing the game. With Canada as HOH they can make big decisions without the kick back. They want Andrew gone, with Sabrina, Rachelle and Allison

to follow. Kenny and Sarah are starting to  turn on Andrew now. They want to distance themselves so they don’t get any of Canada’s hate. Who did Canada decide to nominate. Arisa makes an appearance to tell them who it was. After making them squirm a lot we finally have our nominations. Sabrina and Andrew are on the block. Andrew is angry and Sabrina is crying. The First 5 have just gotten schooled by the country. How will they handle it? They are already imploding on themselves. Who do you think the First 5 will cut first?

Do you wonder what actually Big Brother players are thinking about this season? Check out what Spencer and McCrae had to say about this season. I am so excited to announce that we are doing our first interview with an evicted house guest LIVE tomorrow at 3pm EST.  Join us as we talk to Kyle Shore.  It is going to be a great time. Kyle is hysterical and loves talking with his fans. If you can’t make it live but want to have a question answer tweet me or Eric using the #YRRKYLE and we will be sure to ask for you! Don’t forget to comment below and let me know what you think of Canada’s decisions this week.