Hello all you Big Brother Canada Fans!  I can’t even tell you how excited I am to be covering the second season of Big Brother Canada for www.yourrealityrecaps.com  I am such a fan of Big Brother and was beyond excited just to watch the first season of BBCAN. To be able to share my thoughts with all of you is totally a dream come true! Now that being said let’s get on with the real order of business. BBCAN2 is premiering on March 5th at 9 pm on Slice in case you’ve been away or living under a rock. This year we have switched studios and they have totally revamped the house and it looks AMAZING!  The house is equipped with 190 mirrored windows, 85 cameras and 60 microphones.  There is no hiding for the house guests this year! The designer Pete Faragher was going for a more modern theme this year. Some changes are that there is a bedroom floor now, the pool is actually in the house. How lucky are they on those lock down days they can still swim? So let’s get on with the tour! 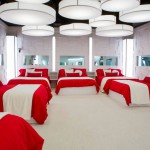 Our house guests will be sleeping in a Canadianna themed bedroom all decked out in our National Colors of Red and White! This year the bedrooms and the bathroom are all on a different floor. Different studio meant smaller studio so they built up. 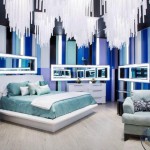 How amazing  is this HOH bedroom? It’s icy and posh and to win the game you need to spend a lot of time in there. All the lying, scheming and backstabbing will take place here.  If we are lucky maybe even some showmancing will happen. 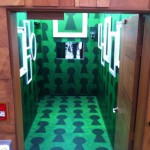 The Diary Room Hallway.  I say the butler did in the kitchen with the rope.  Anyone feeling the urge to play Clue right now?  It’s fun, it’s wacky, it’s what we Canadians are all about! We won’t see much of it except on the Live Show voting but I thought it was  a funky way to make a hallway not so blah! 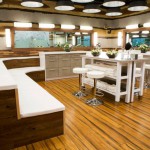 They say the bathroom is one of the most important rooms in any house.  OMGlee I want this spa inspired bathroom.  Loving it so much I can’t even contain myself! Hopefully there are no showergate issues this season. Lets see how long they can keep it clean! 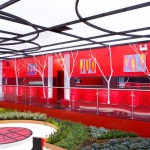 The herb garden.  I love the greenery aspect of this but the house guests are going to have to find a way to keep this alive, it is real people! Anyone else wondering how green the thumbs of this year’s house guests are?  I am, these will be some pretty messed up herbs in 75 days if they don’t take care of them. 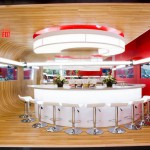 The kitchen is the other most important room in the house and this one is Star Trek inspired. Not a fan of the show but loving the kitchen it created! I wonder what kind of creative concoctions of slop this year’s house guests will think of. Luckily we have a restaurant/bar man in the house! 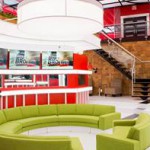 The sunken living room,  has this circular couch that can be moved to fit anywhere in the circle, so expect it to be moved         around a lot  for the  live shows. I hope this couch is Topaz tested and approved for comfort and sleepabitlity. 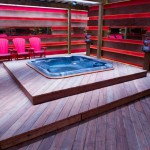 Hot tub anyone? I love this one much better then last years. Given the weather we have been having here of late, I hope they give the house guests a shovel to clear all the snow off it so the can use it!

The pool!!! Suzette would have been in heaven if this was her pool last season.  The designer called it the pool garage and it’s inside and part of the house. We shall see if the house guests are able to use it during lock down or not. 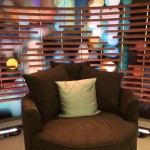 Here is where we will find out all the secret strategy in people’s heads, and how they really feel. The tears, the laughs, the frustration of it all will come out here in The Diary Room.  Loving it! Nice to see they got a normal chair this year, unlike last years chairs that no one could sit in properly.

For a video tour of the house, there are a few that I really enjoyed:

Arisa Cox is once again hosting the show. She did such a great job last year. I am really excited to see her back in action again this year.  You can follow her on twitter @arisacox She is super interactive with fans and a true fan of the show,  which is going to make this season even more fun. We also have the Big Brother Canada Side Show that airs immediately after the live eviction episode on Thursday night. It is hosted by Gary Levy and Peter Brown. We get to hear what they think of everything that is happening in that house. Those two never fail to entertain.

The cast was revealed today as well. It consists of 15 house guests but we were  only shown 14 so I wonder what that means? A returning player maybe? We will have to wait and see. But til then, this is who we know about.

This is Adel,  He is a 27-year-old Welder from Edmonton, AB  He describes himself as aggressive and plans on being a leader and working with the guys.

Here we  have Andrew, a 27-year-old Restaurant Manager.  He says he is outgoing and energetic. He plans on being a gentle giant, gaining trust then making moves.

Anick is a 28-year-old Reiki Master from Hammer, ON  She is eclectic and spiritual. She says she has no strategy, she is leaving it to destiny.

Next up is Arlie. He is unemployed and from Claremont, NL  He is passionate, energetic and conniving. He has a three-part strategy and has only revealed the first part which is to be loved and be funny.

Heather is 23 and from Barrhead, AB  She is a Model Agency Coordinator. She describes herself as fun, out going and bubbly.  She plans to be fun, and bubbly and not let people know how smart she is.

Ika was born in Jamaica but lives in Thornhill, ON  She is a 29-year-old hairstylist.   She believes herself to be witty and charming. Her strategy is to either get into a large 4 or more person alliance or pick 1 or 2 be loyal and only talk game with them.

This is Jon and he is a 23-year-old student from Clarenville, NL He says he is fun, energetic and goofy.  He plans to align with a physical competitor, get him to bring in a showmance with a strong girl and bring in some brains.

Kenny is a 25-year-old Model from Windson, NL.  He says he is ambitious, confident and intelligent.  He plans to start slow, sit back and watch everyone pick each other off, then win challenges.

This is Kyle,  he is 24 from Porters Lake, NS. He describes himself as jacked, charming and athletic. His strategy is to assess the situation and not be an ass right of the bat. He will slowly unleash the douchebag.  His words, I swear.

Next up is Neda. She is 22 from Vancouver BC  She is a Freelance Fashion Stylist.  She describes herself to be blunt, sassy and clumsy.  Her plan is to be nice and make personal connections.

Here we have Paul. He is originally from South Africa but is living in Toronto, ON  He is a 43-year old Consultant and Motivational Speaker.   He says he is analytical, creative and funny. He wants to observe, connect and play a social game.

Rachelle is a 20-year-old Student from Edmonton, AB  She describes herself to be loud, funny and talkative. She has no real strategy except to tone down her loud personality

Next we have Sabrina. She is a 25-year-old Hair Dresser/Make Up Artist from Montreal, PQ  She says she is fun, big-hearted and big-mouthed. She wants to fly under the radar and charm the women with her hair and make up skills, and charm the men with her food. She is relying on her social game.

Last but not least is Sarah.  Sarah is a 32-year-old Mortgage Broker from Osgood, ON  She describes herself as fun, outgoing and kind.  She plans on being kind and likable, then forming and alliance

This is a pretty young cast so I see a lot of hot tubbing and showmancing in our future.  Kyle reminds me of Jeremy from BB15. I really like Paul but I worry about him being the oldest man with no guys near his age. I hope he can fit in with the younger guys.  Sarah kind of reminds me of a Helen type. She is the older and a mother.  Who do you think has what it takes to bring home the prize. I will reserve my judgement until the first week, when I see them in action 🙂  I can’t wait to discuss all the plotting, the scheming, secret alliances and showmances with you this season.

Lets keep the conversation going.  Comment below and you can follow me on twitter @dgoodyear1975 or on google+  Dana G.  I look forward to chatting with all of you!