Now that the brothers managed to get enemy number 1 Maddy evicted, Big Brother has thrown another curve ball their way. Their loved one are standing on the edge of a crater playing the HOH competition for them. In Between a Rock and a Hard Place their loved ones need to stand there and count how 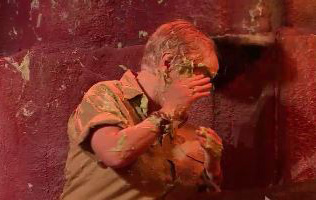 many rocks are falling from the sky. When they think they’ve seen 1000 rocks fall they hit their buzzers and the closest one over or under wins the HOH for their player. Nothing is always as easy as it seems though. Along the way Big Brother will throw some challenges their way. With the Brothers mom hosting the competition we have Tim and Cassandra’s dad, Nikki’s best friend, Jared and Kelsey’s sisters, and Joel’s mom in the BB backyard. All seems calm enough when the first hard decision comes their way. Do you want the house on slop or will you take some slop in the face? No one wants their family on slop so they all take one in the face for them. Poor Joel’s mom gets slop right in the eye. BB almost blinded the poor woman. How is she going to see the rocks now? Anything for her boy though she says. What a sweet mom. Along the way we get some DR’s from the family. They all do a better some then some of the people left in the house. Why can’t we be watching them?  Freddy, Nikki’s best friend knows she doesn’t want the HOH title for the power, he’s playing for the Vodka that will be in her basket! Big Brother makes them face another 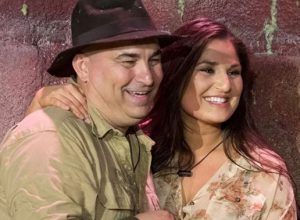 decision. The house on cold water for the week, or get blasted with cold water. Freddy knows that Nikki will murder him if he doesn’t do it but Cassandra’s dad Said seems to be taking a little joy in the thought of princess Cass showering in cold water. Ultimately the house guests are safe and everyone gets a cold shower on the crater. Cassandra’s dad is the first to buzz in and he is followed by everyone else soon after with Freddy being the last. Daddy’s girl Cassandra is the new HOH. Said the science teacher was within 20 rocks of the 1000. I am so excited to see what Cassandra will do with some power. Everyone gets to spend a little time hugging their family before they are off. Hours before eviction Cassandra had gotten wind of the brothers intent to evict Tim and managed to squash it making the brothers to very unhappy boys. Will they be her target this week? 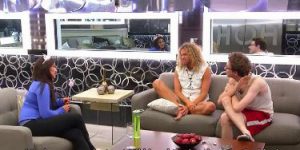 Cassandra wastes no time getting down to business after her HOH reveal. The boys know after the pre eviction drama they are going to be targets, now it’s time for damage control. Freakshow realized that they will be controlling 50% of the votes next week. Their road to the final 3 is pretty clear. It’s all about what is the best way to get the brothers out. Tim suggests nothing fancy, put  them on the block. and let it play out. But who do you put next to the brothers……Nikki of course. She has the perfect excuse, neither have been on the block before so it’s a good excuse to not ruffle any feathers. Cassandra does have another option of the bigger move of getting out Jared and Tim is really starting to respect her game. 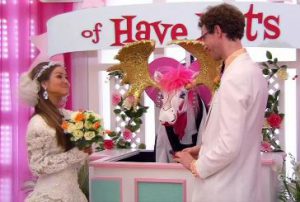 House guests are sick of slop by now and Big Brother has a win-win situation for everyone. If Joel and Nikki get “married” in The Little Chapel of Have Nots slop will be over.  Both Nikki and Joel are all over that task. The two separate to get ready for the Big Day. The girls getting all dolled up in wedding wear BB has provided in the HOH room 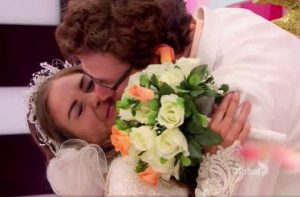 and the boys are in the Blue Room getting all suited up. Nikki has some very strict terms for their marriage. No touching, no petting, no kissing. Marsha marries the couple with Joel in a white suit with a peach ruffles shirt and Nikki in a wedding dress plucked right out of the 1980’s. The have not suite is no officially closed for the season. No  veto’s will be coming the floor this season! Everyone gets to celebrate with cake and champagne. 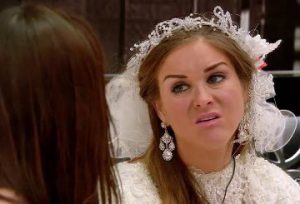 Nominations are still looming despite the festivities. Cassandra has to sit her down and let her know she’s going up as a pawn. Nikki is not impressed. Not because she fears eviction because she doesn’t want to do the “homework” involved in being a pawn. Speeches, campaigning, all the trips to the DR are aggravation Nikki just doesn’t have the time for. Kelsey is trying to convince Cass to put up Tim.  While she takes in the info, she goes to her ride or die Joel for advice. The brothers go to Cass and she makes them campaign wearing her HOH tiara and wand. Kelsey wants Jared to go to Cass and talk to her and he just wants to lay low. He eventually goes to her. She puts the idea out there that she puts him up next to the brothers and he is having none of it. Jared didn’t work too hard to get to this point. Really Jared, you worked hard, more like Kelsey worked for you forming relationships and campaigning for your ass.

Cassandra wants to be remembered for making a bold move. Her short list is the Brothers, Nikki, Jared and Tim! Will she actually take this opportunity to get out her best friend/alliance mate. Decked out win tiara and wand Princess Cassandra takes the stage to make her nominations.. Sticking with her original plan she nominates Nikki so she can have the total BBCAN experience and the Brothers because they are so well liked and are playing a great social game. Nikki does not want to be in jury with Maddy and Raul and the brothers vow to blow the house up before they go. It should be an interesting week in the BBCAN Grand. Comment below and tell me what you think of Cassandra’s nominations.

HELP US GET TO THE BBCAN BACKYARD RIGHT HERE

Get The Scoop On The Latest Big Twist HERE
See How To Watch From Anywhere RIGHT HERE!
Our Live Recap Show & Interviews Will Be Fridays At 7PM On YouNow