Big Brother 2 – The Season of Secrets!!

Well everyone the moment we have been anticipating has finally come. After a year we finally have new house guests in the Big Brother House and I couldn’t be more thrilled. With Arisa Cox back as our hostess with the mostess we were greeted with her amazing smile and tales of The Season of Secrets. It was all very intriguing. Arisa started us off with a small tour our new house. We were shown two new rooms that weren’t shown during all the pre season press tours. One was the “half not” room. This is where our poor have-nots will have to spend their time sleeping in a room half the height, in beds half the size. Consider it a black and white down the rabbit hole sort of space. Good luck house guests. We were also shown the “war room” all we were given was that they could strategize in there. I can’t wait for Arisa to tell us exactly what kind of role that room will play this season.

We are now getting our first view of our beloved house guests. These poor souls we will be watching every minute of the next 75 days. We will be examining them under a microscope, so Canada let’s be Canadian about this. Lets not get anyone fired from their jobs this season. Lets remember that these are real people with real families and not go totally insane!! Our first group to enter was Kenny, Arlie, Sabrina, and Sarah.

They ran in and picked their beds and politely sat and waited for everyone else to enter before popping the champagne. Liza would be so proud!! The next group was our group of 4, Ika, Anick, Kyle and Jon. They introduced themselves with customary hugs and off they went to find their beds. Unlike BBUS our house guests have no choice but to get nice and cozy with each other with only 7 beds. The final group of 5 entered the studio and they were Adel, Neda, Paul, Heather. There are more hugs and introductions and the bed situation is quickly sorted and they go downstairs and crack open that champagne as a happy little family for now.

Kyle has his shirt unbuttoned in the first 30 seconds of entering the game and the #TARPOFF was born. Anick quickly showed just how bananas she really is as she is prancing around the storage room for God know what reason. 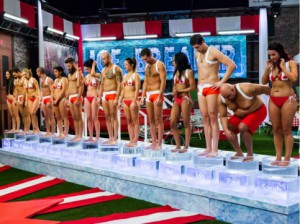 We were quickly brought into the HOH competition. They were told to change into their bathing suits. Thankfully the backyard really isn’t outdoors since we here in Toronto are having one of the most awful winters in a very long time. The challenge is appropriately called The Icebreaker Challenge. House guests had to stand barefooted on blocks of ice. Last to step off their block wins HOH Once eliminated there was pizza, beer and wings waiting for you. They are all standing there trying to figure out how to deal with their freezing toes, and Adel just starts twerking and thrusting and honey in that itsy bitsy bathing suit I wasn’t complaining! Anick was busy becoming the ice to get through this challenge but her strategy didn’t work. She jumped off first. Paul then brought out his inner game player. He was pretending he couldn’t take much more, saying I only have 24 minutes left. He persuaded Sarah to jump down telling her he would be right behind her. He wasn’t. Andrew was the first guy to jump, followed by Sabrina. This is when they bring out the prize lures to get down the greedy. Three coolers were placed out for 2 minutes. Heather was immediately off that ice and won not only $1000 but a big ole target on her back. Ika was next off and she got a prize of having to stay in her bikini for 48 hours. There were no takers for the third cooler. Our goofy newfie is up on the ice cracking jokes. For my American friends, newfie is a term of affection for those from “The Rock” Newfoundland so please take no offense at the term. Jon is saying in my hometown there is always snow and we don’t have shoes. I am loving this kid! He also thanked Big Brother on 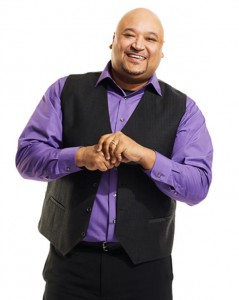 behalf of Canada for putting Ika in a bikini for 2 whole days. Paul starts to deal up there on the ice block. He promises the remaining 7 safety, no back door nomination if they jump off and let him have it. Let’s face it, no one really wants that responsiblity on Day 1 so if someone is saying hey you are good, and let me have the target you hand it over. Kenny and Neda aren’t so sure about this but they come down with the others. Sarah is mad that she was convinced to step down early and Paul is our first HOH of Season 2.

After Paul’s win Arisa now tells us the first twist of the game. We have been hearing about our mystery house guest since the cast was revealed. Theories have been swirling the net. I have heard it was going to be Dan Gheesling but as I follow him on twitter and knew he was clearly not sequestered, I didn’t even entertain it. Elisa Slater was another theory. They even got creative as to say that it was either going to be Peter or Gary depending on a house guest vote. Mostly because people think the pairing of serious Peter and boisterous Gary as a duo on the sideshow was just plain odd. On the contrary, they both had great but different strategies going in. We get to decide from Nate, Allison and Scott. The three of them will live in a small room in the Big Brother house. They will eat, live and sleep there. Sort of like season 8 of BBUS but they were only contained for hours not days. We will have a week to watch them and vote on who goes into the house. I have decided that my top three are Adel, Jon and Sarah. I just get good vibes from them and I think Jon is adorable. It is just a coincidence I picked one from each set of house guests to enter. Not planned I promise.  I also promise that this will be a spoiler free blog so you can feel safe that outcomes of challenges won’t be revealed until they are aired.

Let me know what you think of the episode, the house guests and the twist. I am so excited to talk to you all about everything that is going down in the Big Brother House.