Julie says that this is 2nd double eviction of the summer. She says that Paul has been in control of the game and steering the ship, but some of the others are taking notice.

After the POV ceremony, Kevin and Jason say that it comes down to the two of them. Kevin says he thinks he’s heading to jury. Jason says he doesn’t see Alex voting against him. Paul is shown putting together the strategy of forcing a tie in the votes with Raven and Josh voting out Jason and Paul and Alex voting out Kevin. Then, Christmas will break the tie. In DR, Kevin says he doesn’t understand the strategy of taking Alex off the block and putting him up. He says that Jason and Alex are the 2 best physical players and they were already up there. 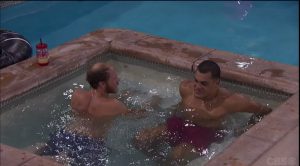 Josh is having a tough time with his part in blindsiding Jason because Jason is his friend that’s helped him so much in the house. He is seen ‘having a moment’ getting choked up while in the hot tub with Jason. He agrees to do it because Jason is a comp beast, but it hurts him. 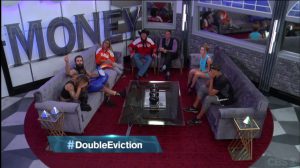 Julie pops up on the screen in the living room and informs the houseguests that tonight is a double eviction. Jason and Kevin give their pleas to their houseguests with Jason congratulating his wife and asking his houseguests to keep him in the house to compete in the double. Kevin says hello to his wife and kids, thanks everyone for a great summer, says he’s proud of all of them and thanks Julie for being a gracious host. 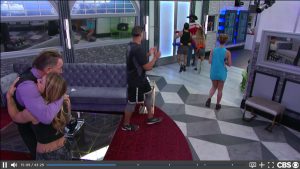 Everyone votes as Paul planned, with Josh breaking down in tears as he cast his vote for Jason. Julie informs the houseguests that there is a tie, and Christmas must face the nominees and cast her vote. She tearfully says that at this point in the game, personal and game overlap and strictly from a game perspective, she votes to evict Jason. Jason storms out, saying bye to no one and cursing at them on the way out the door. 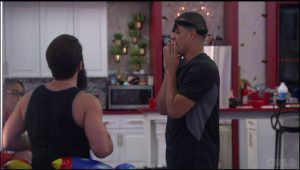 Josh and Paul have the staged fight that they planned prior to the eviction. Josh is crying and apologizing to Alex, saying that Jason is just too strong of a competitor and it was a game move. Paul says that if he hadn’t won the veto and had been put on the block, would Josh have voted him out? Josh answers, “Yes.” Alex and Paul walk away from the others, as Paul acts as though he was blindsided by the vote. This is all a rouse choreographed by Paul, Christmas and Josh prior to eviction to tie Alex to Paul so that he will have some influence on her should she win HOH. 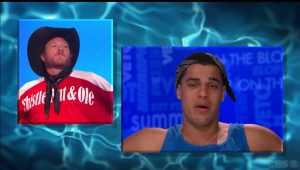 When Jason sits down with Julie, he tells her that there are a bunch of counterfeits in there, and he wishes she would let him go back in there for 5 minutes. She says for the safety of the houseguests, that’s not allowed. He is completely blindsided, and Julie asks why he didn’t campaign harder for votes. Jason is stammering over his words and Julie says that his goodbye messages might make things clearer. First, Alex’s says if you’re seeing this, we’ve been blindsided. She tells him he’s been her best friend in the house and her partner in crime. Next, Josh’s message makes things clearer for Jason. He tells him that he, Paul and Christmas have a final 3 alliance and that Paul came up with this elaborate plan to get him out this week. He tells him that he’s just too strong of a competitor, and he hopes that he can respect this as a game move. Finally, Paul’s message echoes Alex’s, saying that if he is seeing this message that they’ve been blindsided and he will do his best to get Alex to the end of the game. Jason is furious. (Important side note: on live feeds, in his post eviction interview, Jason blamed Alex and Paul for his eviction and believes that they planned his ouster together. He now wants Christmas to win because he thinks it’d be funny to see a 1-legged girl win. He’s PISSED and will be a bitter juror who votes emotionally, not on who played the best game! He was talking about punishing Paul with bulls, but also said that he would be friends with Kevin and Paul after BB. No mention of Alex; he thoroughly believes Alex stabbed him in the back.) 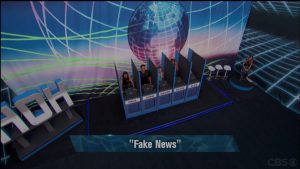 The HOH competition is Fake News and features headlines from throughout the season. They are either real news or fake news. The goal for Christmas, Josh and Paul is for Josh to win. There are 7 headlines. Alex is still shaken up from Jason’s eviction and is sobbing slightly, but she gets all 7 questions correct and becomes the HOH. Paul tries to grab her to discuss nominations, but Julie calls the houseguests to the living room for Alex to immediately make her nominations. Normally during double evictions, houseguests are given a moment to strategize. With Paul running the house, production wanted to make sure he didn’t railroad nominations. Alex nominates her nemesis Kevin and Raven for voting against Jason. 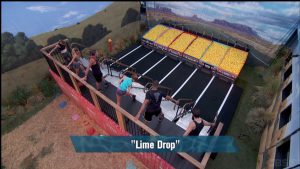 For the Lime Drop POV, all 6 houseguests participate. This is a more elaborate ball pit (clown shoe) comp, with each player looking through their lemons (yellow balls) to find limes (green balls). Once they find a lime, they bring it back up the stairs of their lane and must drop the lime into a tube behind a fence at the top of the stairs. If their lime doesn’t go in the tube, they must go find another 1 in the ball pit. The first person to get 4 limes in their tube wins POV. Paul appears to have thrown the comp. Alex and Josh ran neck in neck and in the end, Josh won the POV. Josh chooses not to use the POV, so Kevin and Raven remain on the block.

Paul and Christmas vote to evict Raven.  Josh votes to evict Kevin. On her way out the door, she tells Josh that he didn’t have her back. Raven goes from totally pissed at the houseguests to doing a cartwheel over to Julie. She’s a phony girl; that’s for sure. She says to Julie that she played the game to the best of her ability. (In her post eviction live feed interview, she said that she has a powerful story, and people probably didn’t think they could beat her in final 2. Okay, Raven. Keep believing your delusions.) 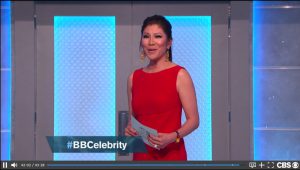 Julie teases an unexpected announcement. A new HOH will be crowned on Sunday. She shows the BB Comics trailer featuring James, Caleb, Frankie, Nicole and Da’vonne. We’ll see the entire trailer on Sunday, but that’s not the big announcement. There will be a special eviction episode on Wednesday night and a second eviction on Thursday, which leaves the final 3 in place. The big announcement is that Celebrity Big Brother is coming this winter. We look forward to covering it for you on www.yourrealityrecaps.com.

That was one hell of a double eviction episode! What do you think?