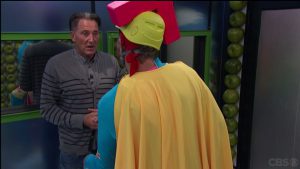 Mark used Save a Friend on Paul hoping to build some inroads to stay in the game. In DR, Paul says he still wants Mark out this week. Kevin tells Jason that even if Mark is picked to play in veto and wins, we will send Matt out the door. (If that happened, there would be a tie and Christmas would send Jason out.) 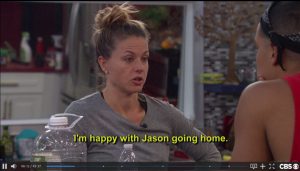 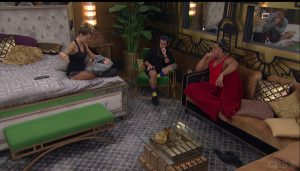 Paul, Josh and Christmas discuss the potential top 5 and who is strategically best. They want to take out Jason and Matt, then tie in Raven and Alex. In DR, Paul says that yes, he has a side deal with Alex and sure, he has final 5 deals with people, but he can’t show that he is protecting anyone because it’ll paint a target on his back. Paul wants Matt and Raven and Alex and Jason to target each other. So, the ideal top 5 would be Paul, Christmas, Josh, Kevin and Raven. 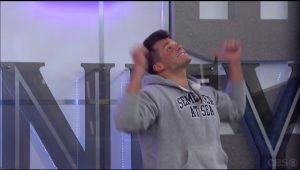 Mark says he just needs 1 win to stay off the block, but he feels very lonely right now. For the POV draw, Christmas picks houseguest’s choice and selects Raven. In DR, she says she blacked-out and meant to pick Paul. Matt also gets houseguest’s choice and selects Paul. Jason draws Mark’s name, and Mark jumps up, super excited. “Let’s compete,” he says. Jason says in DR that Mark getting picked is worst case scenario. Jason says that he must win the veto. Jason is dumbfounded that Christmas picked Raven. Christmas tells Alex that she should have picked her, but she just froze and meant to pick Paul. Mark goes to Paul to talk to him before the veto comp. Paul points out that Mark has won 4 comps. Mark says he must win or he’s going home. #ThisIsWar 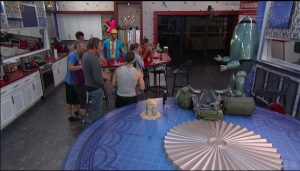 Zingbot makes his annual visit to the house. Everyone is excited for this BB tradition. Here are the zings for each houseguest: 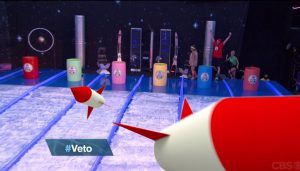 Alex hosts the Veto competition, Home Zing Home. Mark says that now that the zings are out of the way, he must win this veto because it’s him verses the whole house. Christmas can’t participate. Alex reads the instructions to the players. President Zingbot must get back to Planet Zing because CNZing is reporting that he is being accused of colluding with President Puntin from Planet Pun to help steal the election. The houseguests are all looking at one another with shocked faces as this is the only inkling that they’ve gotten that the Trump campaign is being accused of possible collusion with Russia. (They put the clues together on live feeds after the competition.) 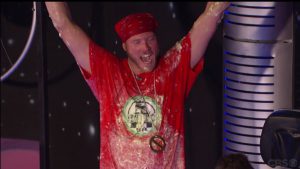 To help Zingbot get home, they must fill up their large containers with fuel. It’s the Crisco running competition. If players choose to fill up a smaller container, once they grab the ball out of the smaller container, they can use a super scooper to fill up the larger container 8 times. Jason goes for the smaller container while everyone else fills up the large container with the smaller scoop. The large scoop helps Jason catch up to Paul and Matt. Raven and Mark are HORRIBLE in this competition, falling repeatedly. It becomes a 3-way race between Jason, Matt and Paul. Once Paul sees that Mark is out of the running for winning, he slows down so that he won’t be forced to choose between Matt or Jason. Jason wins the POV. Paul says that this worked out perfectly. Jason winning increased the target on his back, Mark is going to be backdoored and go out the door and Paul is safe no matter what.

After a week of punishment, Jason is released from his Extreme-otard, and Alex is no longer a camp counselor having to lug around all that camping equipment. Alex says she never wants to see another wiener again. 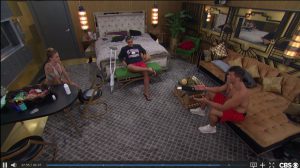 Mark goes to Christmas and Josh trying to make a deal. He pledges that he’ll be loyal to them. He says that Alex is the strongest competitor, and that she should be the replacement nominee. After Mark leaves, Christmas says that’s a good argument, and we need to get rid of Alex sooner rather than later. 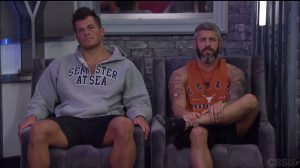 At the Veto Meeting, Jason uses the veto on himself. Christmas tells Mark that on the first night when she was on the block, Mark promised not to vote for her if she’d do him a favor later. She says they’ve had their ups and downs since then. Last night, she listened to him campaign to stay in the house, so she feels her obligation to him has been fulfilled. Christmas names Mark the replacement nominee.Mark says in DR that as hard as this is, he’s not dead yet, and he’s going to try to charm a few people. Matt says that he is doing his best to help his team get out the target, but being on the block is getting old. Paul says that after Mark is evicted, people will start firing at each other and he can sit on the sidelines and watch the fireworks. Christmas says that whoever is in power, Mark pledges loyalty to and his loyalty is poop. However, having Matt on the block is enticing to get rid of a power couple.

Mark is a goner. The people who promised each other top 8 will be there after Mark’s eviction. The HOH Competition will be endurance that we get to watch on live feeds. Expect to see Paul throw the HOH competition once Kevin is out. He has been working hard to get Alex and Jason to target Matt and Raven and vice versa. He has firmly lined up Kevin as a backup target with all the other houseguests.