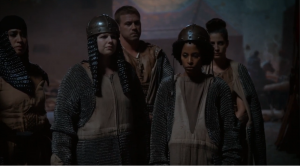 Last week, the Paladins saved the Queen’s life! They didn’t have much time to celebrate, as shortly thereafter Ansgar announced that Everealm was under attack. We begin this week’s episode in the courtyard with Ansgar ordering everyone around as they prepare to defend Everealm. As the Paladins are gathering their armor, Ansgar shouts at them, “Verlox is here, don’t you get it?” Everyone is panicking and trying to get battle ready when Ansgar tells them to stop. Ansgar says, “As you may have figured out, this was a drill. Verlox’s army is closing in, but fortunately, he has not arrived. If he was here, the castle would be taken by now, and he would be sitting up there and he would rule Everealm.” From the looks of the Paladins, they were as surprised as I was to find out that this was merely a drill. Ansgar made his point though; the Paladins are nowhere near ready to fight off Verlox. Ansgar tells the Paladins it is his fault that they are not prepared, and it is his job to prepare them. Ansgar tells the Paladins that he and the kingdom thank them for saving his Queen, and tomorrow they will start again with training and a test. I guess Ansgar has finally reevaluated his initial assessment and dismissal of the Paladins. Ansgar tells Bonnie, Shondo and Andrew that they get to choose who they want to go to battle with, because they won challenges. By luck of the draw, Shondo chooses first, and he picks Patrick and Jasmine. Bonnie chooses Adria and Leticia, and Andrew picks Christian and Lina. Ansgar tells the Paladins to return to their quarters and go to sleep. 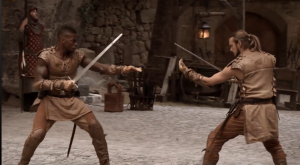 The next day, Ansgar makes good on his promise to train the Paladins. They learn to sword fight against each other, which all of the Paladins seem to really enjoy. It probably helps that Ansgar tells them they are doing a good job, since up until now he’s mostly been pointing out all of their flaws. Then, Ansgar goes back to his tough love approach, and asks Shondo to point out Christian’s weak spot. Shondo replies that it’s the inside of Christian’s arm when he strikes. Seeming unsatisfied with this response, Ansgar asks Shondo if he trusts Christian. When Shondo says that he does, Ansgar says from now on Shondo shouldn’t trust Christian. Ansgar turns to Christian, and asks what Shondo’s weak spot is, to which Christian replies, “His mind” (ouch). Shondo doesn’t seem too happy with Christian after this remark. Ansgar brings out two of his soldiers to show the Paladins what trained soldiers can do, and they are all duly impressed. Ansgar then tells the Paladins to line up, and asks them individually what they think of a specific person. I mean, that seems like a totally crucial exercise that definitely won’t cause any drama, right? Ansgar asks Lina what she thinks of the guys, and her response is dead on. Lina says, “The love that they have for each other, sir, I think  is far stronger than the love that they have for us as a team, sir.” According to Andrew, he is the reason Christian is still there, but it’s a weakness he doesn’t want other people seeing in him. Trying to save himself, Andrew tells Ansgar that Lina is mistaken, and that he trusts both Christian and Lina with his life. Ansgar doesn’t seem to buy this, and asks why Lina feels left out. Lina says it is a gut feeling, and Ansgar tells her to go with her gut. When Ansgar gets to Leticia, she only sings praises about Bonnie and Adria, which apparently bores him to death. He then yells at the Paladins, and demands that they stop being so nice. He pulls poor Crio out, and says that Crio is not a courageous guy, and if he goes to battle with Crio he would want to know that. As Ansgar keeps lecturing the Paladins, Crio leaves. 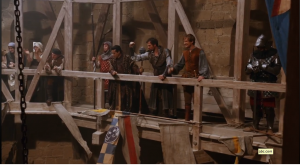 Since Ansgar seems to be all about creating drama today, he drops a bomb on the Paladins- instead of going to war with their chosen teammates, they will actually be fighting against them *gasp*. What will happen to the Andrew/Christian bromance now? Lina says her heart dropped, because she immediately knew Andrew and Christian would gang up against her. Leticia says she was actually excited for this twist, because she went from being at a disadvantage to fighting against people she is confident she can beat. The Paladins enter an arena where townspeople are watching and cheering. Ansgar tells them that each group will step out onto one of three planks, respectively, and they will battle against each other. The first to fall off will be sent to the Fates, and the victor will advance to the next round. In the first match, Lina’s prediction comes true, and she is the first to fall as both Christ 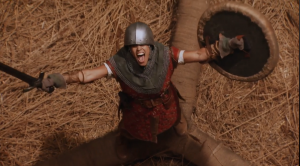 ian and Andrew attack her. All Andrew has to do is run straight into Christian, and Christian falls immediately. In the beginning of the second match, Adria and Bonnie double teamed Leticia, but then Adria was walking along a plank and just fell off. Leticia loses her sword fighting with Bonnie, but Christian encourages her by yelling that she has everything she needs right there. Leticia pushes all her weight into Bonnie, who falls off. During the third match, Jasmine looks as though she is holding her own, shoving Patrick, but she loses her balance and falls. Shondo knocks Patrick off, meaning that Andrew, Leticia, and Shondo will face off in the final match. In what seems like seconds after the match starts, Leticia knocks Shondo off, then Andrew comes after her and she knocks him off too. Everyone screams with joy for Leticia, who says it was epic that she knocked down a MMA fighter and a division 1 wrestler. 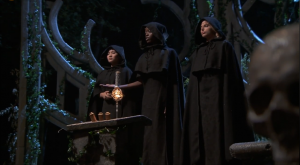 Leticia for her win, and presents her with the Mark of Strategy. Leticia says she wanted to prove to herself and to the others that there was a reason why she’s here, and that she didn’t want to leave without earning a mark. Of course Sir Ansgar can’t let the Paladins celebrate Leticia’s accomplishment for too long; he praises Leticia again and then reminds Jasmine, Lina and Adria that they will have to face The Fates. Leticia says it was very sobering, because two of the people closest to her – Lina and Jasmine – are up for banishment. The Paladins return to their quarters briefly, then go to meet The Fates. The Fates are in black robes today, because darkness is approaching. They tell the 3 Paladins up for banishment that they will face a test of metal against bone, and again, their skill with a sword will determine the victor. The Paladins must stand on a circle and smash skulls (that are being launched at them) with a sword. Whoever smashes the most skulls will be safe from banishment. Jasmine goes first and hits 5 skulls. Before she begins, Adria says she feels pretty comfortable with a sword, so this will be easy. Adria hit 7 skulls. Lina says she has to win, or else she will be banished. She ends up hitting only 5 skulls, meaning Adria wins, and Lina and Jasmine must face banishment. 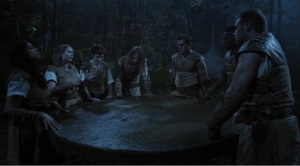 The Paladins must now decide who to save. Leticia says that Jasmine did very well in the horse challenge, whereas Lina has yet to rise to her full potential. Bonnie says she is just going to walk in there, and whichever way her feet take her is what she’s going to do, because as of right now she doesn’t have a definite answer. Christian says it’s hard, because Lina showed great heart today in the dome going up against him and Andrew. Christian also says that Jasmine showed fearlessness attacking Shondo like that. Andrew thinks Lina is a strong woman, but he didn’t appreciate that she said he only shows love for his roommate. Shondo says that anyone who can run at him with a sword and is half his size… the word balls comes to mind. Adria says no, ovaries, Jasmine womaned up. The Paladins agree that it’s a difficult decision. Jasmine says she knows she can rely on Leticia and Shondo, because they gave her their word. Although Jasmine turns out to 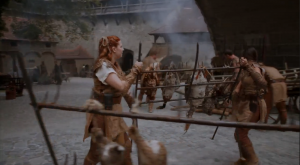 be correct, only Shondo and Leticia vote for her, so she is banished. I wasn’t expecting so many people to vote for Lina, but I’m really glad she’s staying. I find her very interesting, and she showed a lot of strength and fight in the sword challenge. Shondo says he thinks the fate of Everealm is in good hands with the Paladins that are left, he says the cream is rising to the top. The next day, the Paladins are outside in the courtyard doing chores when the Queen rides up on a horse. She commends Leticia for winning in the battle dome, then says she must retire, as her strength hasn’t fully returned. Since The Quest can’t end on a boring note, a soldier bursts into the courtyard and tells Sir Ansgar that an ogre has broken through the outer walls.

A lot of unexpected events occurred this episode! First, there was the fake Verlox attack. Then, Leticia using her wits to beat two of the strongest men in the entire competition in a duel. Finally, Lina staying over Jasmine, when it seemed like a lot of Paladins wanted Jasmine to stay in Everealm with them. I think the producers are doing an amazing job at keeping every episode action packed an entertaining, but also vastly different from previous episodes. Next week, the Paladins (with the help of Sir Ansgar, I’m sure) will have to protect Everealm from the ogre! Unless this is another one of Sir Ansgar’s tricks to prepare the Paladins for battle. Let me know what you think in the comments below, and who is your pick to become the One True Hero!