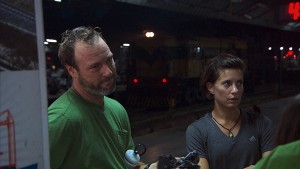 This leg of the race teams are flying to New Delhi, India, where they’ll face a u-turn at some point. After landing in New Delhi, racers have to take a train to Agra, where their next clue will be at the banks of the Yamuna River. Obviously every team wants to u-turn Justin & Diana, but I’d say only Kelsey & Joey have a real chance of beating the green team to the u-turn. All teams are flying out together, which gives Justin time to tell a few teams that he thinks Josh & Tanner will be eliminated this leg. Once the plain lands in New Delhi, all teams head to the train station. Since the station is closed, the racers join the many other people camping out overnight. Logan & Chris take this time to try and convince the green team to u-turn the Texas guys. Chris says that he’s not a big threat, then Logan mentions that the cheerleaders can’t use the u-turn because they tried to u-turn the green team several legs ago. When Justin asks Krista & Tiffany if this is true, they lie and say that the paparazzi made it up. The two teams go back and confront Logan, who denies that he had hidden intentions. Honestly, I think Logan & Chris probably weren’t on Justin & Diana’s radar before this (or the cheerleaders’), but now they’ve drawn attention to themselves at a bad time.

When the station opens in the morning, all teams board a train to Agra. Once the train arrives, the teams 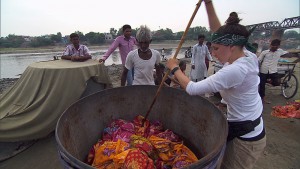 get in marked Tuk-Tuks to go to the Yamuna River. At the river, the cheerleaders are the first to reach the roadblock. Coming Out in the Wash requires racers to pick a bicycle loaded with dirty laundry, ride it over to a marked washtub, and then lay the clean saris out to dry. The ride to the washtub involves a large hill, which makes it tough for some racers. Tanner decides to do the roadblock, but as their speed bump Josh will have to perform the same roadblock once Tanner finishes. Chris is the first to reach the washtub, although he can’t quite get the hang of the proper way to wash the saris. Diana and Ryan pick up the proper folding/tying techniques pretty quickly, but the other racers are struggling. Josh is nervous because the roadblock is taking awhile, and he’s not exactly sure what it entails. As the other racers are just trying to finish the roadblock, Denise starts singing, “If you’re happy and you know it, clap your hands!” Neither the locals or the other racers seem very amused. Tanner says, “If you’re not going to U-turn us, let me know.” There’s silence until Diana says that they’re not planning to U-turn the guys, then others start agreeing. 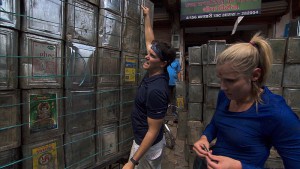 Denise isn’t singing once she tries to carry the soaking wet saris to be dried, because they’re very heavy. Joey finishes the roadblock first, followed by Chris. They’re now headed to Hanuman Temple to receive a blessing in order to get the next clue. Justin & Diana leave as Tanner finishes the roadblock and Josh takes his place, trying to complete it as fast as possible. Joey & Kelsey arrive at the market and get their blessing, then the detour clue. In Cans, teams have to load a cargo bike with 120 oil cans and deliver them through the chaotic streets to the oil company. Candy requires teams to cut and wash 90 pounds of white pumpkin, then deliver two packages of the petha candy made from the 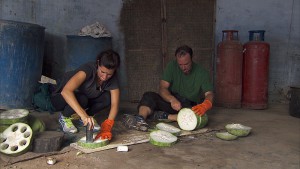 pumpkins to a candy store. Krista and Denise finish the roadblock, leaving Josh by himself to complete it. Kelsey & Joey’s Tuk-Tuk driver takes them to the wrong place, which gives the green team a lead over them. Justin & Diana are almost done loading the giant cart of cans when Kelsey & Joey arrive. The other teams have chosen Candy, which seems pretty tedious as well. Josh finishes the roadblock pretty quickly, then he & Tanner choose Candy. Logan & Chris have the most pumpkin cut, but when they get it weighed it’s still not enough. 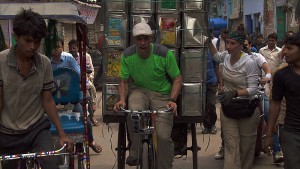 Justin & Diana navigate their cart of cans through the busy streets, then successfully reach the oil company. Once again in first place, the green team is off to Bijighar Chowraha Roundabout, the site of the u-turn. Finally, Logan & Chris get enough pumpkin cut to take the petha to the candy store. Joey & Kelsey are knocking off a lot of cans as they try to unload the cart, but they finish the detour in second place, with Logan & Chris right behind them. During this 3-way race to the u-turn, the green team’s taxi driver has to stop and ask for directions, but Justin & Diana still reach the u-turn first. They decide not to u-turn anyone, then are off to search the grounds of the Moonlight Garden in Agra for the pit stop. Joey & Kelsey decide to u-turn Josh & Tanner, which technically makes sense because they’re a strong team, but the guys haven’t been a threat to Joey & Kelsey lately. Justin & Diana come in 1st place and win a trip to Honolulu, Hawaii. Joey & Kelsey come in 2nd place, followed by Logan & Chris. Of course Chris uses this time to bash the green team, saying they “rubbed him the wrong way,” that morning. In reality, he tried to manipulate them and they called him out on it, then they came in first place yet again, so he’s mad. 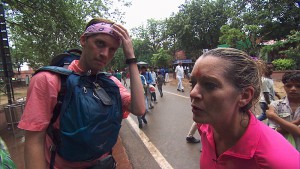 When Krista & Tiffany see that Joey & Kelsey u-turned the guys, they’re mad because it seems like an unnecessary u-turn, which is surprising from the reporters. Even though Tanner & Josh are a really strong team, in this situation it kind of seemed like kicking them while they’re down. The guys were already in last place, and they each had to do the roadblock, so they likely would have been eliminated this leg even if they hadn’t been u-turned. Tanner & Josh are understandably pissed when they see that they have to complete the other detour. The guys say that now they’re rooting for the green team to beat Kelsey & Joey. Although Denise & James reached the u-turn before the cheerleaders, they get lost on the way to the pit stop, putting Krista & Tiffany in 4th place. After wandering around for a while, team Alabama realizes that their Tuk-Tuk driver took them to a different garden. They get instructions from several locals and run around looking for Phil while Tanner & Josh finish stacking the cans on their cart. As Josh & Tanner are unloading the cans, Denise & James finally get correct directions to the Moonlight Garden, and they come in 5th place.

Josh & Tanner make it to the pit stop in last place and are eliminated from The Amazing Race. What do you think about Joey & Kelsey’s decision to u-turn Josh & Tanner? It’s hard to say how close they actually were to team Alabama, but production certainly made it seem like Josh & Tanner could have come in 5th place if they weren’t u-turned. Let me know what you thought about this leg of TAR in the comments below!