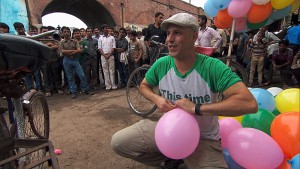 Justin & Diana start this leg of the race at 5:10 pm when they open a clue telling them to take a Tuk-Tuk to Kachora Bazaar. The clue also reveals that there will be another u-turn this leg, which could be interesting since only 3 of the 5 remaining teams still have the ability to u-turn. Chris has an upset stomach, but he says that it won’t affect his performance on this leg. The green team reaches the roadblock for this leg, Full of Hot Air, in which racers have to blow up balloons and use them to fill a giant net, then attach them to the back of a bike and deliver them to a wedding planner. Justin has a good number of balloons filled when Joey & Kelsey and Chris & Logan arrive. Justin asks Joey who he & Kelsey want to u-turn, and Joey says anybody. Justin then says that they might u-turn Chris & Logan to help Joey & Kelsey out. Justin finishes filling the balloons, and rides the bike through the busy traffic as Diana gives some of the local children temporary tattoos. Logan is having trouble getting her balloons to stay in the net, but Joey is making progress when Justin returns having delivered the balloons. Justin gets a clue directing them to the Goyal Book Store, the site of the u-turn.

Joey delivers the balloons to the wedding planner, and while he finishes the detour the cheerleaders 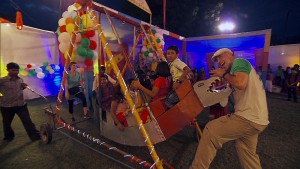 arrive. Logan’s net keeps getting caught on the bike, but she finally has enough balloons to bike to the wedding. James starts the roadblock but has trouble untangling his net, and Logan finishes the detour. Diana & Justin decide to u-turn Chris & Logan to help their friends (Joey & Kelsey). Honestly, I’m guessing Chris’s behavior was what pushed them to make this choice; the question is, will it come back to bite them in the butt? Diana & Justin have reached the detour. In Bring the Groom, one team member has to carry an electric candelabra while the other pushes an electric generator and follow the groom to his waiting bride in order to receive the next clue. Bring the Fun requires teams to push a popular carnival ride through the busy streets and give 8 children a ride to get their next clue. Joey & Kelsey are happy that the green team kept their word and didn’t u-turn them. 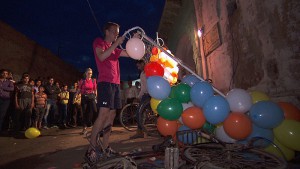 Tiffany is riding her bike to deliver the balloons and seems to be getting harassed by men on bikes, then one man rips the net and almost all of the balloons fall out. She still gets a clue when she delivers the bike, but she’s understandably flustered. Diana & Justin are pushing the carnival ride through the streets, while Joey & Kelsey join the wedding procession with the generator and candelabra. Logan & Chris aren’t surprised to see that they’ve been u-turned, so they now have to complete the other detour in the dark. James is the only one struggling to complete the roadblock, but he finally manages to deliver the balloons. The green team arrives at the party and finish the detour. The clue tells them to search the party for Phil and their next pit stop. Justin & Diana bring a bunch of the kids from the wedding with them to the mat, where they come in 1st place and win $5,000 each. Kelsey & Joey come in 2nd place, while Chris & Logan are arguing about where to deliver the carnival ride once they’ve reached the party. Logan says that they need to stop pushing it so children can get on, but for some reason Chris disagrees with this. Finally, Chris understands that giving the kids a ride means that they need to let kids get on the ride and then push it. 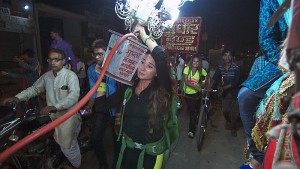 Tiffany & Krista are having trouble starting their generator, but they eventually manage to get it working. Chris & Logan arrive as the cheerleaders are following the groom to his bride. Team Alabama choose Bring the Groom as well, although they’re currently in last place. All three teams are struggling to push the generator/carry the candelabra, as both are heavy and it’s a long walk. Tiffany & Krista come in 3rd place, and Logan & Chris get 4th place. Denise & James are the last to reach the mat, and they are eliminated from The Amazing Race. What did you think about the u-turn in this episode? Obviously Chris & Logan will want revenge on the green team, but at this point it doesn’t seem like they have the ability to beat Diana & Justin. However, they did manage to beat team Alabama despite a u-turn, so anything is possible. Let me know which team you would have u-turned in the comments below!