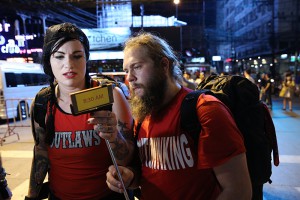 This leg of the race starts off with teams learning that they will be flying to Phuket, Thailand! Actually, the episode started by focusing on which blind date teams asked to stay in separate hotel rooms at the pit stop, and which are sharing. It seems that all of the blind date teams are simply here to run the race, except Jackie & Jeffrey, who might have a connection. Bergen & Kurt say that they aren’t a match, romantically, as they’re both looking for a big masculine man, but that they’re friends who want to win the race. When teams arrive at the airport, they learn that the counters are closed for the night, so they have to stay in the airport. The olympians, JJ, Mike & Rochelle, the hairdressers, and Blair & Hayley are on a flight arriving at 4:50pm, Laura & Tyler and Jolani & Jenny are scheduled to arrive at 9:10pm, Burgen & Kurt book a flight that arrives at 12:59 am, and Harley & Jonathan will arrive at 9:34 am. The olympians and the hairdressers get the clue first, which lists a departure time of 8:30 am, and tells them that they can stay at a specific B & B, but there are only 5 rooms available. After going to a bar, the teams from the first flight go to bed. In the morning, the only missing team is Jonathan & Harley.

The first 3 teams receive their next clue, which tells them to go to Baan Teelanka, the upside down 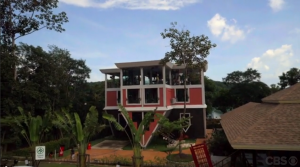 house. Teams now face a detour. Ski requires teams to survive one lap around the Phuket wave park while catching a ride on a wakeboard attached to a cable that moves up to 20 miles an hour. Tree requires teams to deliver a full meal while riding a zip-line through the treetops without dropping anything. At Tree, Blair tells Hayley that they don’t need an entire meal, because he sees the teams ahead with incomplete trays too. Hayley says that just because other teams are doing something doesn’t mean it’s right, and that they should follow the menu, but Blair ignores her. The 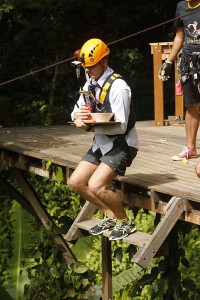 lawyers don’t pass the challenge, which Jelani thinks is because he spilled too much of the drink, when in reality they don’t have the full meal. After zip-lining, Blair admits that Hayley was right, and he apologizes to her. Hayley is still complaining as they wait in line for the zip-line, and at this point I’m feeling bad for Blair. Yes, he should have listened to her, but he made a mistake, and she needs to just let it go. Mike & Rochelle finish the task and are off to My Way Cabaret. Blaire & Hayley finish the detour, followed by Tyler & Laura.

Aly & Steve have attempted Ski 8 times, and they finally decide to switch 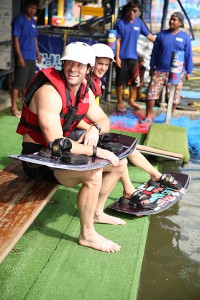 detours; JJ sees this and decide to switch as well. Since Jonathan & Harley are now in Phuket, it’s possible that they can catch up. At My Way Cabaret, Mike & Rochelle learn that they need to dress up as a dancer and perform a choreographed routine in order to receive their next clue. It’s very amusing to watch Mike attempt to put on makeup, and to see the way he and Rochelle goof around. Bergen & Kurt finish Tree, with the lawyers finishing soon after them. Matt spills his champagne while warning Ashley not to drop her tray, then tries to scoop some out of the soup. The laywers finish the detour, then Aly & Steve complete it. Kurt & Bergen win the Date Night pass; it’s very amusing to watch all the men react to having to wear makeup and heels. Tyler is a hot mess trying to apply his makeup. The hairstylists finally finish the detour, followed by JJ. Mike & Rochelle are so far ahead that they get to attempt the dance 8 times without another team interrupting them, which lets them finish that task in first place. Mike & Rochelle are now off to the pit stop, Baba Nest Rooftop Bar. 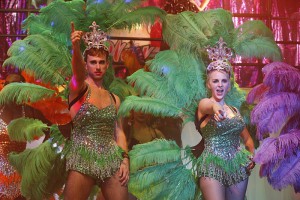 Hayley & Blair finish the task next, then the lawyers complete it, followed by Matt & Ashley. Rochelle & Mike come in first place and win a trip to Prague! Tyler & Laura and the olympians manage to complete the dance successfully while dancing together. Bergen & Kurt finish next; while in the taxi on the way to the pit stop, Matt realizes he’s lost his fanny pack and freaks out (perhaps because there’s something important in the fanny pack?). Right as Matt & Ashley leave the challenge with the missing fanny pack, JJ finishes the task. Hayley & Blair come in 2nd place, Jelani & Jenny come in 3rd, Laura & Tyler are in 4th place, Ally & Steve come in 5th, Matt & Ashley get 6th place, Bergen & Kurt are in 7th, and Jackie & Jeffrey are in 8th place. As the seven teams just stand at the mat, Matt 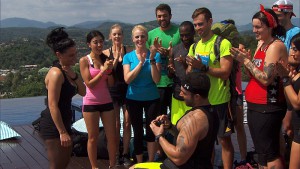 says he has a promise he wants to make to Ashley. He says an adorable speech – “Ashley, I want to promise you that every morning before I leave for work I’ll tell you that I love you, I promise you that every night before I go to sleep I’ll give you a kiss goodnight, and you’ve got to promise me that you’ll make me the happiest man in the world. Ashley Michelle Gordon, will you marry me?” – and Matt & Ashley get engaged! Most of the racers are cheering and/or crying, including Phil! Bergen & Kurt give Ashley & Matt their Date Night Pass. Quite some time later, Harley & Jonathan arrive at the pit stop to learn that they’re in last place, but it is a non elimination leg, so they’re still in the race!

What did you think about this leg of the race? Nobody really changed positions in the race much, so it wasn’t too exciting, but I enjoyed getting to know the teams better. I’m glad Jonathan & Harley weren’t eliminated, because they didn’t really do anything to screw up, and I’d like to see more of them. Also, I now want to visit the upside down house in Phuket! Let me know who you think will be eliminated next week in the comments below!