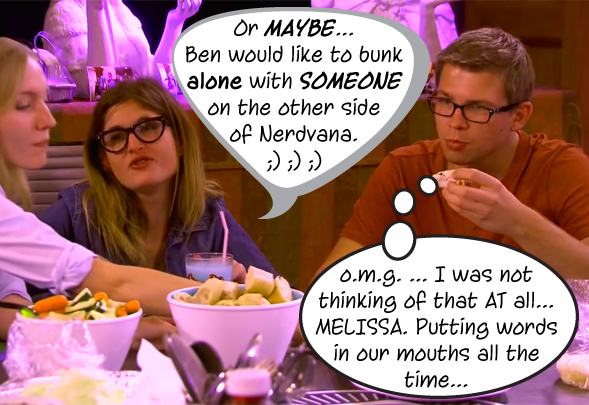 This week in Nerdvana… Amanda is super stoked that she won the Nerd Off; she feels bad for Colby, but she’s really happy that she won. Colby’s horcrux is his cricket bat and they place it with the others and Kaitlin welcomes Amanda into the Nerd Off Winners Club… UGH! I should have made that Nerd Off Winners Club joke I wanted to make two weeks ago in my blog because I was GOING TO! LOL … In addition to winning herself more time in Nerdvana, Amanda has also won some self-confidence. She defeated a worthy opponent; no one is unbeatable to her now. At the dinner table, Katilin asks about new sleeping arrangements since they are no longer separate teams. Ben asks if they are all going to sleep in the same room, Amanda says they could have a girls room and a boy’s room, and they can have pillow fights… Like Ben is really wants to let that happen and let the girls be on the other side of Nerdvana where he can’t watch them! lol 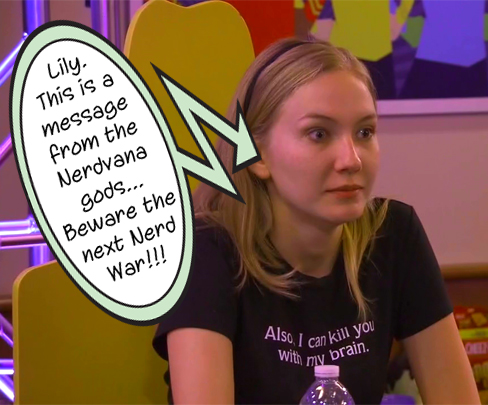 Because it’s individual game time now, folks. No more secret six, no more girls alliance. It’s every nerd for his and her self now and Ben says that if no one saw him as a threat, they haven’t been paying attention. The next morning, in the blue bedroom, Lily isn’t feeling well, but it’s nothing serious – seems like allergies to me, love. Other times when she’s not felt great, everyone was really good about helping her feel better, but now that it’s an individual game, all she has are her tissues and hot water to get the fuzz out of her head. Lily. I love you. We all wanted to see Luna Lovegood in Nerdvana, but Kelsey got voted out first last year; this year, we have you. Luna is my favorite character in Harry Potter. *wink* Around the breakfast table, which is not awkward, yet, this week, the nerds are pondering if “she”, I’m assuming Heather, got bitten by a zombie, and if she is slowly turning… Ben is having no zombie talk at the breakfast table, though! Zombies are no joke. lol 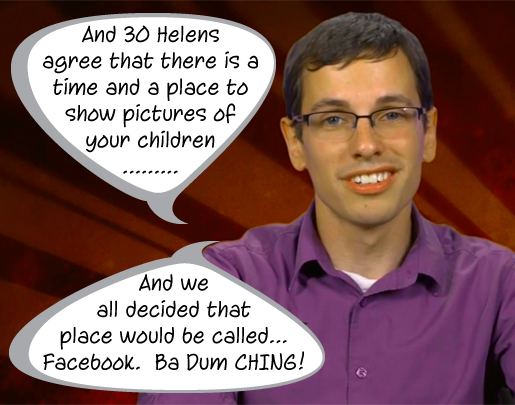 Calling all nerds! In the courtyard, Raychelle is a little nervous about seeing Curtis and Bobby in spacesuits. With Kaitlin, a Nasa girl, around this could mean trouble for Raychelle. Not to worry, girl! Bobby just lost the keys to the space ship in which they were going to play the next Nerd War sooo… Now it’s time to battle the aliens that have taken over the ship in a game called Melt My Face Off. More importantly, they are battling for their own Immunity and the team banners fall to the ground; it’s officially official, again. It’s individual game time. They all have two hours to study anything remotely nerdy to prepare. Anything and everything remotely nerdy at all is what they have to study. Jonathan is really glad he’s spent so much time studying and knows how to do it; he, Ben and Kaitlin have studied their asses off to earn their doctorates. Three doctors agree: studying is important. So Jonathan doesn’t think that Lily, Amanda and Raychelle will do very well with the studying, since they haven’t done as much. Yeah, Amanda knows that, but she’s still riding the wave of self-confidence from her clobbering of Colby. Raychelle just knows that she’s not going to remember everything… 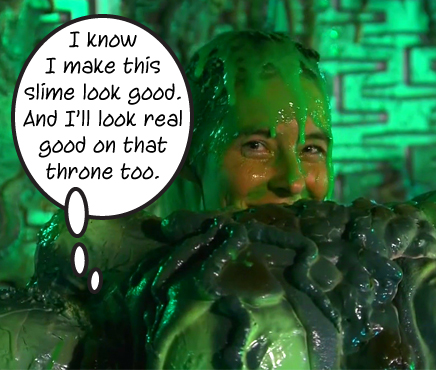 To the Nerd War! The nerds are really up to their necks in this one, literally, trapped up to their necks in the scenery. Each one is contained within an alien “trap” and to get out of this pickle, they will have to play a devilish game. In each round they will be given a category and for each category they will take turns listing items belonging to the category. If they fail to answer, the alien queen’s tentacle will begin to devour them by blasting “acid” onto their faces. Once a nerd has been blasted twice, they will be eliminated and the last nerd standing will not only be granted Immunity from the Nerd Off, but they will get the soul choice of deciding one of the players in it. First Round: Top 100 highest grossing superhero movie titles – Lily takes a hit. Second Round: Drivers in Mario Kart 8 – Kaitlin gets slimed. Third Round: Constellations – Amanda gets the acid bath. Round Four: Civilizations in Age of Empires – It’s “poop city” for Raychelle, because that’s the only city she can think of. Round Five: Contestants on King of the Nerds – Jonthan gets a “point”, but not Ben’s point that keeping your wits about you is key in this challenge. He’s feeling pretty dry as the only player that hasn’t felt the sting of the alien queen. 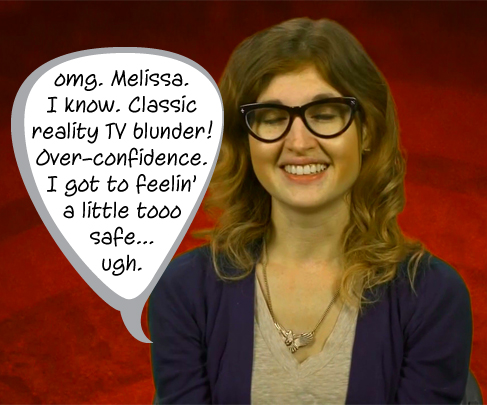 Round six: Plays of William Shakespeare – Nice try, Lily, but no… The Scarlet Pimpernel is not a Shakespeare play and dagnabit! That’s two hits for you and you’re out. Round seven: First generation Pokemon – Bye, bye, Amanda… … … She accepts her fate. Round eight: Spells in Harry Potter – Jonathan is outta the contest. Round Nine: 100 best sci-fi & fantasy films – Kaitlin freezes on the Event Horizon. And it’s down to Raychelle and Ben. In Round Ten, Ben can’t think of a Weird Al song and the alien queen attacks so it’s all down the last category. Round eleven: Great houses of Westeros from A Song of Ice & Fire… Too bad Raychelle didn’t read or watch Game of Thrones, (I haven’t read or watched it much either… 😉 ), because she might have won this Nerd War if she did, but she didn’t. So Ben wins the war, (and a David Pressler robot sculpture)… But Bobby and Curtis have a bomb to drop. The two nerds eliminated in rounds one and two, will face Round twelve and not winning means immediate banishment. It’s between Lily and Amanda aaand… She should have studied the periodic table table more instead of covering it up to do puzzles aaand… I’m really glad Amanda accepted her fate, because she loses the battle of naming the table’s elements. 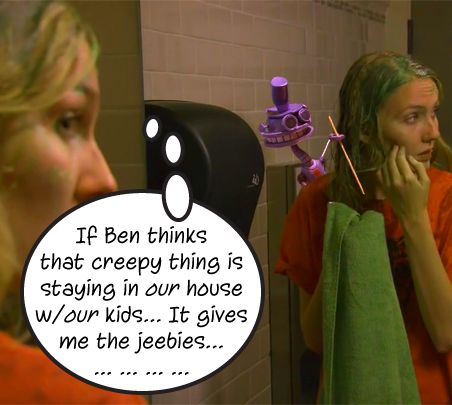 After hugs for Amanda, it’s back to Nerdvana with the Final Five. Jonathan’s plans have been blown apart. One of his best allies just left, his biggest threat has Immunity… After taking a look at Ben’s other prize, it’s time to clean the alien acid off their bodies, and we see the ladies Big Brothering it up talking game in the bathroom. No one has any idea who Ben will vote into the Nerd Off, even Lily looks a little worried. Lily! Raychelle thinks Ben will vote for her, but Kaitlin tells us that if Ben is smart, he’ll send her because she’s a huge threat and he should be trying to get rid of her to make it easier for him to win the game. Later Ben asks Jonathan what he would do. Easy. Send in his biggest threat and let everyone deal with it. Jonathan knows he can’t really control Ben’s vote, but he can sort of manipulate the votes of the four other people in the game. 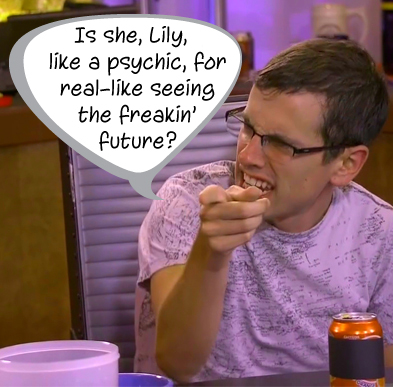 Around the table, Jonathan, Lily, Kaitlin and Raychelle are talking about Ben’s vote. Raychelle still thinks it will be her. Lily just comes right out and says it: She knows they are going to vote her in because they don’t want to send in someone that could beat them if Ben chooses them. They all think she’s the weakest player. Jonathan says, if it was her, not saying it will be, but if it was, it would be because Lily is a strong player because she could beat them at a lot of stuff. As soon as she leaves the room, Jonathan confirms with Raychelle and Kaitlin – they are sending Lily in, right? Oh yeah, oh yeah. Mos def. The next morning it’s decision day for Ben and Jonathan is making sure to keep Ben’s pineapple craving at breakfast satisfied, but fair for everyone else… He doesn’t want to, heh, ya know, go into the Nerd Off, haha… ha… Kaitlin knows Jonathan will do whatever it takes to save his own skin; she and Raychelle talk about flipping the girl’s votes to Jonathan. She knows Lily would vote for him. They could make this move. They don’t seem to actually tell Lily, though… Kaitlin just says that she might be more okay than she thinks… Hmmm… 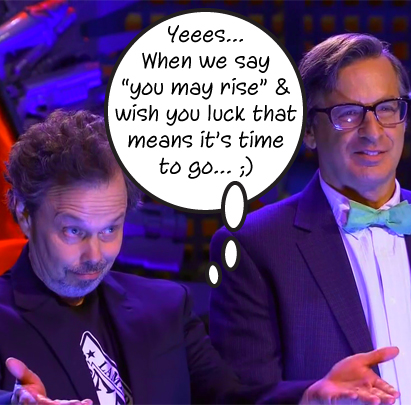 To the Throne Room! After a little chat about the Nerd War and what it was like to play as individuals – little different, little awesome, little not awesome… Ben’s vote is revealed first and it’s for Raychelle and she’s not surprised. She showed she was good enough to get at least second place in the Nerd War. She’s cool. It’s the game. Everyone has to go to a Nerd Off sometime, even in the end of the game. This is just her leveling up. On to the second vote, which is the first vote of the second vote, and it’s for Lily. Cutting to the chase, Lily is going to the Nerd Off. Raychelle had to vote for her; she didn’t want to go up against PHD’s… So this week’s Nerd Off is called Pocket Nerds and it will focus on strategy. Practice boards are in the library, and after some “leaving the Throne Room” confusion, Lily is happy to see that Pocket Nerds is just Stratego with a nerdy twist! Raychelle does not like her life right now. She’s never played Stratego and she is so grateful to have Jonathan around to help her, but Lily also has a strong competitor helping her. Ben. 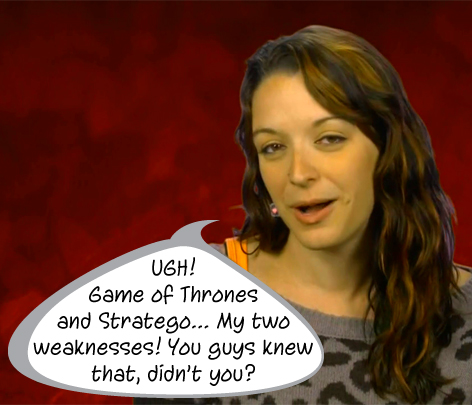 To the Nerd Off… For those of you that haven’t played Stratego, you should sometime; it’s a fun board game. I haven’t played Stratego enough, though, to really get into the meat and potatoes of it in this blog and I need to get it posted sooo … Basically… It is sort of like capture the flag and checkers on a board with pieces that are worth different point values. The bigger the point value, the stronger the attack value of that piece. Raychelle slipped up and mistakenly moved a piece she didn’t mean to move and it threw her off for awhile and Lily was looking really good. Then Raychelle noticed a window of opportunity to make a go at Lily’s flag, buuut… ::shakeshead:: It was too late. Lily got to Raychelle’s flag first and Raychelle has been Nerded Off the game board. Guess that theory about the show being sexist in favor of women is OUT the window this week… *wink*

So! We’re down to the Final Four: Ben, Jonathan, Kaitlin and Lily. I have no idea who is going to win and I’m not going to make any speculations. Any one of these four could take the throne and I’m just happy we’re all watching season three… And speaking of, Nerd Army… We will remain quietly vigilant after next week for word of season four… We will rise again if called to duty… #NerdStrong #NerdArmy #nerdsrule. 😉 So! Next week! Finale Time! Until then, if you like Survivor, check out my Survivor blogs,  Hanne’s on Amazing Race blog duty this year and Dana is about to wrap up her blogs and videos about The Bachelor; there’s Hell’s Kitchen stuff, Bravo stuff, all kinds of fun reality TV related stuff is here so surf around! And if you shop on Amazon, use this link – it really helps us out and you don’t pay more! 🙂 Also… I chatted with the folks @NerdChatCentral last Friday if you care to watch, click here!

King of the Nerds 3 Blog Recap Episode 8: The Nerdtastic Finale

King of the Nerds 3 Blog Recap Episode 6: Murder At Nerdvana?!