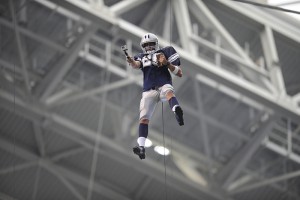 The final leg of The Amazing Race season 26 begun with teams flying to Dallas, Texas. All teams are on the same flight to Dallas, which leads to a taxi race to the AT&T stadium. At the stadium, teams reach a roadblock. Play Like A Pro requires one team member to get a playbook from the air (while wearing a harness), then catch a pass, and make a field goal. This so-called roadblock seems pretty easy, as racers get lifted in the air to get the football, and do little physical labor on the field. Although Mike & Rochelle were initially in the lead, it took Mike several tries to catch the football, so Tyler surpassed him. Tyler kicks a field goal, so he and Laura are off to P2 Ranch. Blair catches the football on the first try – while Mike is now failing at kicking the football – then makes 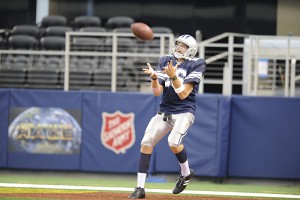 the field goal on the first try. Laura & Tyler’s taxi driver doesn’t know where P2 Ranch is, so they wait for Hayley and Blair’s driver to lead the way. Hayley sees this as she exits the stadium and yells at Laura & Tyler to get away from their cab. Jelani is having trouble making a field goal, which probably isn’t helped by Jenny’s shrill voice screaming at him to kick higher. Mike eventually kicks a field goal, which makes Jenny freak out. For some reason, Hayley & Blair’s driver isn’t leaving the stadium; Mike & Rochelle come out to find the two leading teams still sitting there. Jelani makes a field goal, causing Jenny to scream some more. 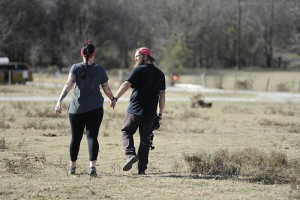 It turns out that Blair & Hayley’s driver isn’t sure where the next location is, which Laura & Tyler surmise, so they decide to follow Jenny & Jelani’s taxi instead. Mike & Rochelle’s taxi didn’t wait for them, so they’re walking along the road hoping for another taxi. Mike & Rochelle eventually get a taxi, while Hayley & Blair arrive at the ranch. In Cowboy Up, teams must work together with a group of cowboys to corral a heard of longhorn until 6 are in the pen. Hayley’s horse is just wandering around while Laura & Tyler and Jenny & Jelani show up. Mike & Rochelle’s driver stops to get gas, which understandably upsets them. Hayley & Blair finish the task and 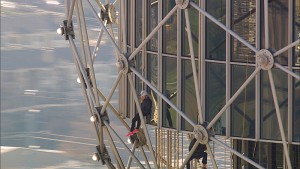 are on their way to Reunion Tower. Jenny’s horse starts bucking as they cross the water, making Jenny fall off. The lawyers finish, followed by Laura & Tyler, then Mike & Rochelle arrive. Phil tells Mike & Rochelle that they are eliminated from the Amazing Race. Hayley & Blair encounter another roadblock at Reunion tower; Keep An Eye Out requires one team member to look for their next clue as they repel down the tower. Hayley finishes as the other two teams arrive, which annoys Tyler. Hayley can’t seem to direct the cab driver to the clue, although she keeps telling Blair to do it (which makes no sense, because she’s the only one that knows where the clue is). Hayley isn’t even directing them to the correct clue, which is a row of flags, she’s directing them to a red car on top of a parking garage. 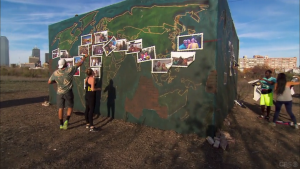 Laura & Tyler make it to the flags first, because the lawyers turned left when they turned right. The clue tells teams to drive a monster truck through a mud bog, then test their memory skills. In this challenge, teams must unlock a shed by figuring out the combination from the names of 4 locations they visited along the race (each location corresponds to the leg number), and they will find selfies in the shed. Laura & Tyler are only confident in 2 of the 4 numbers; meanwhile, Jenny is very much enjoying the monster truck ride, and Hayley is repelling down the building again. Hayley sees the flags this time, and apologizes profusely to Blair. Jenny & Jelani get their shed unlocked, and they now have to chronologically chart their journey on the race by placing selfies on a giant map. The lawyers are struggling with this task, but after only messing up the order of one photo, Laura & Tyler finish the challenge and go back in the monster truck as Hayley & Blair arrive. Laura & Tyler freak out when they realize they’re in first place, and that they are now heading to the finish line, which is at the Continental Avenue Bridge. Jenny & Jelani finish their map soon after, so Laura & Tyler need to book it.

Laura & Tyler’s driver doesn’t know where the bridge is, so they jump out and ask a different taxi 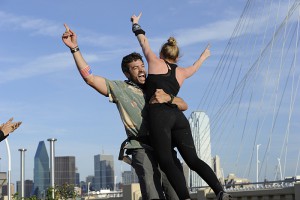 driver, who gives their driver directions. Jenny & Jelani soon jump into their cab, and of course production does there best to make it look like the lawyers will win, but that doesn’t happen. Laura & Tyler come in first place and win 1 million dollars and The Amazing Race! Of course Tyler took a video of them winning the race… I have to say, all the selfies this season kind of annoyed me, but I’m glad they made the stupid selfie camera somewhat relevant by incorporating it into the final challenge. Jenny & Jelani come in second place, and Hayley & Blair get third place. Hayley says she will 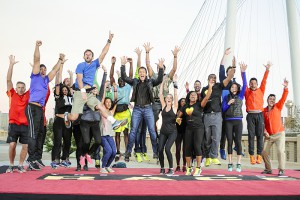 never forgive herself for messing up at the tower and costing them the million dollars. Phil says that they all came on the race looking for a million dollars and love, and Tyler quips, “still looking” (for love). What did you think about this season of The Amazing Race? Are you glad that Laura & Tyler won, or were you rooting for one of the other teams? Let me know in the comments below!