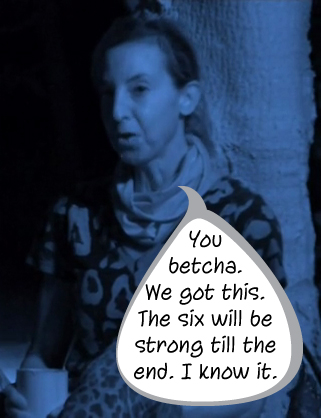 This time on Survivor… When the tribe returns to camp, Debbie is very, very, very pleased with herself; what she wanted to happen – happened. She says there’s a line drawn in concrete now – there is a strong six in herself, Sierra, Brad, Tai, Troyzan, and Sarah and they are going to systematically vote out the other five one-by-one. new balance u420 femme rose LOL! Later, Zeke and Andrea “chat” about why she voted for him, but it’s a quick conversation that ends with Zeke walking away because Andrea isn’t wanting to let him talk too – she keeps saying he’s shady. Zeke feels safer with the majority voters because of this; even though he wasn’t in on the Ozzy vote, he feels he chances of moving forward are better when them.

Even later… Sarah tells Zeke that she’s sorry she couldn’t tell him about the vote, but she needs the others to trust her – he’s cool with it – and they are in a good place right now. Sarah wants to work with Zeke and whoever thinks a line has been drawn in the sand needs to remember that the tide comes up and washes away that line…

Come on in, guys! It’s time for Reward. Up for grabs? A ride in a sea plane tour and a picnic! In this challenge, the tribe will be divided into two groups of five leaving one person out of the challenge to sit on the bench with no shot at Reward. It’s Michaela, by the way, and she’s piiiiiiiiissed about it. One at a time, each team member must jump into the water clear a series of obstacles. Once all team members are at the other end of the course, one person must dive down to retrieve a grappling hook that will be used to retrieve rings that will then be tossed onto a target. Teams! Captain Brad: Debbie, Sierra, Andrea, and Aubry; Captain Cirie: Sarah, Zeke, Troyzan, and Tai. scarpe adidas bambino shop online So yeah, Michaela doesn’t get picked and she’s mad because she’s really good at challenges and she would have been a good choice, BUT people just picked their alliance members and it’s stupid. Meanwhile… A secret advantage is right by her feet on the bench… She doesn’t find it. Sarah does. Sooo… Let me tell ya about this challenge… Cirie should have picked Michaela because Brad’s team flies through this obstacle course; Cirie, the last member on her team to go through the course, doesn’t even get to the final platform before Brad’s team has finished the challenge. Sarah swam back to help her though, and after the challenge, everyone swims over to help encourage her to finish. And she does!

Back at camp, no one is mad at Cirie; they are all proud of her and it’s all happy tears with the losing team. nike blazer pas cher She knows she’s not a challenge beast, Cirie knows that her best shot at this game is making her relationships with everyone, who is super nice by the way, solid. She is also proud of herself for finishing the challenge and she knows that she can do anything. Later, Sarah finds a private spot to see what her secret advantage is and it is the opportunity to steal someone’s vote at Tribal Council; and the last time she can use it is when there are five people left in the game.

Sarah says that no one has played these extra votes right in the past and she intends to be the first to do so… Cut to the sea plane! Sooo, on Reward, Debbie really enjoys watching everyone else who aren’t in planes as often as she is and blah blah blah. At the picnic, where there IS coleslaw, Brad lets us know that he was very strategic in who was picked for his team; he left Sarah and Troyzan out so he would have eyes and ears back at camp. After a while, they ask Andrea what the deal with her and Zeke is and she doesn’t give the details, but gives the people in the “six strong” alliance enough info to make Sierra feel like she is sitting sooooooooo pretty right now. She’s sitting in the driver’s seat! Things could not get better! LOL! Back at camp, Cirie and Sarah are talking game. They both know Sierra and Brad think they are running things and they discuss who they could pull together to make a move. Cirie thinks that the situation with Andrea is repairable and Sarah thinks Zeke will vote with them too, and Aubry… Sarah doesn’t know what she’s gonna do yet, but if there’s a big move to make that is good for her, she’s ready to do it Come on in, guys! It’s time for Immunity and it’s the “stack blocks on a wobbly table connected to a rope” challenge. Survivors ready? Go! So, they are also spelling Immunity from the bottom up with these blocks and Tai is having trouble with the blocks because he’s trying to spell Immunity from the top down before he starts stacking. Back to everyone else… Andrea is in the lead, but Brad and Troyzan are on her tail then BOOM! Sarah’s stack falls, then Aubry’s blocks hit the dirt, aaand Andrea’s blocks fall leaving Brad and Troyzan in the lead, BUT! Brad’s blocks fall and Troyzan is placing his “I” so all he needs to do is get back to the platform and he does! Wow, quick challenge… Back at camp, Troyzan is super happy about winning Immunity and he thinks there is a tight alliance of six that HE is in sooo they just have to decide who goes home next. Sierra, Debbie, and Brad take to the jungle; Debbie is like, okay, Michaela, but Brad and Sierra think Andrea is a way bigger threat right now – Michaela is annoying and eats a lot, but Andrea is too good.

Debbie would rather get rid of Michaela, but she’s willing to go with the group. Later, all six are together and Sarah realizes the plan was made without her sooo it might be time to make her move…

After the meeting of the six, Sarah has a chat with Zeke. He is totally down to make a move. He knows he’s on the bottom of the six with Sarah, but in order to make this move, he has to work Andrea – just this once. Later, she has a chat with Andrea to let her know that Sarah knows she’s on the bottom and it’s good if she remains in that alliance – good for them and not good for the six. The girls hug it out and we cut to Sierra and Sarah talking. Sierra thinks she and Sarah are real close, she feels very confident in Sarah, and she even wants to go to the final three with her! Sierra tells Sarah that she thinks a good final three would be the two of them with Debbie. And now Sarah is thinking that maybe she’s NOT on the bottom with the six… Elsewhere, Debbie is telling Aubry that Sarah doesn’t trust her as much, but Debbie trusts her and tonight, they are voting out Michaela. Debbie tells Aubry to vote Michaela in case Andrea pulls an Idol and lets Aubry know that if she continues to be a good little soldier, she’ll keep her safe. Kobe 11 Scarpe Elite She wants to keep Aubry close in case she needs to use her and she thinks her strategy is working. Weeell, not so much. nike air max 2017 femme grise She tells Michaela that they are targeting her, then she tells Sarah what Debbie said and Sarah realizes that Debbie does NOT have her back. Sarah has no idea what to do now. If she can control Debbie, she could go far, buuut… She just doesn’t know. She’s gonna decide at Tribal. Sooo… 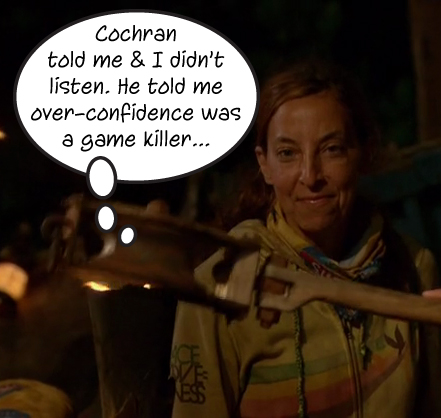 Awaaay we go to Tribal Council! Jeff first wants to talk about the Reward challenge and brings up how Cirie struggled, but fought to finish and how the other people on her team came to her aid. asics gel kinsei hombre After that we talk about how close Andrea came to winning Immunity, but didn’t. She knows it could be the reason she goes home, she knows she’s on the bottom. She wasn’t the only person out of the loop in the last vote. Zeke agrees and points out the six that walked into the wood and made their decision. And Debbie can’t wipe the smile off her face and when she says that they all came together to make the decision, Sarah gives a slight brow raise. After Andrea talks more about being on the bottom, and how there was whispers that it was Michaela, but she’s not so sure. Sarah talks next about how right now it’s important to be on the right side of the numbers; no one can blame them, the six-strong group. Debbie agrees that it’s inconceivable to think that there is anything, but a strong six sitting there tonight. Troyzan says that if you’re in a strong six, you stay there until you get to six and go from there. Zeke pipes in that he’s counting on the deck reshuffling after the vote tonight like it has been. Sarah thinks it’s wishful thinking. Michaela pipes in to say that they all know who’s running the show, those that can make moves tonight should, and then it’s time to vote! And while she’s voting for Andrea, Debbie says that “there are those that give orders and those that take orders – it’s called a democracy”. Uhhhhhhhhhhhhhh… Oookay… So…. The votes after no Idols are played fall as such: Andrea, Debbie, Andrea, Debbie, Andrea, Debbie, Andrea, Debbie, Andrea, Debbie… And… Debbie. #1 Rule of Survivor: Don’t get cocky. All returning players should know this rule. Next time on Survivor… With the deck reshuffled, the tide comes in and washes away the new line and it looks as if it’s gonna be boys vs girls… Interesting… As usual, if you like my blogs, check out more stuff here at Your Reality Recaps.