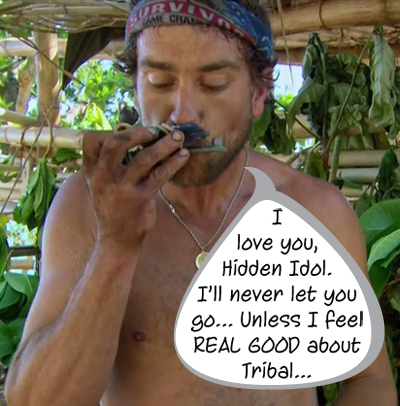 This time on Survivor… When Nuku returns to camp, everyone is shocked that Malcolm isn’t still with them, especially JT, and most of the tribe is wondering how Tai knew to give Sierra the Idol. JT is adamant that he only told Brad that HE, Brad, was safe, Sandra says he also told JT that he was safe, and the big question is what ELSE did JT tell Brad… JT was certain that by sharing information that Brad would help him vote out Sandra, Malcolm was his only friend on the tribe sooo… JT is feeling some post-Tribal regrets right about now. Sandra knows that Malcolm leaving is the direct result of whatever JT said to Brad, she knows it, and the Queen wants his head on a platter… The next day, fearing another tribe to Tribal, JT takes to the jungle to search for an Idol and wouldn’t you know it! He finds a clue! It’s the same type of clue that Tai found directing him a group of trees with marks on them and as luck would have it, the rest of the tribe is busy with other things away from the area. New Balance 247 damskie JT quickly digs up the Idol and is very happy to have it in his possession. adidas gazelle uomo rosse

Once both balls have been delivered to the end station, another tribe member will solve a slide puzzle, UGH, to win Reward. After a few minutes of strategizing, which we ACTUALLY get a glimpse of… Debbie tells the Mana tribe that she’s really good at balancing and Brad is all “great!” and says that she’ll be one of the ball balancers… Survivor’s ready? GO! Mana is first to snag the bow, dig up a ball, and Hali takes to the balance beams. Nuku is next on the beams with JT handling the bow, but Tavua isn’t far behind and before you know it, Ozzy is flying over the beams with their bow and is first to the end station. Due to Cirie having some issues getting at the second ball bag for Tavua, the door opens up for Nuku and Mana to catch up a little. While Cirie is still digging, JT is getting close to finishing the first run through for Nuku, Andrea is getting close to delivering the second ball for Nuku and Debbie is on the beams for Mana… And she is NOT doing very well at all… As Zeke gets to work on the slide puzzle for Tavua, Aubry begins her journey over the beams for Nuku and Debbie finally gets over the first set of beams for Mana. Robert Griffin III – Baylor Bears Aubry finishes before Debbie, though, and it’s a race between Zeke and Sandra for the first-place reward aaand… Zeke wins! Aaand… Sandra wins second place for Nuku because Debbie totally failed on those beams… She didn’t even make it to the end station… Debbie says her team doesn’t strategize, Brad is a dictator, and she’s piiissed. asics gel nimbus 14 mujer 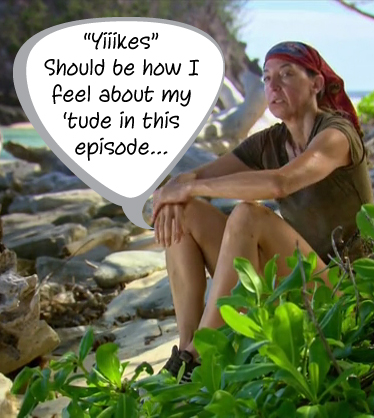 At Tavua, everyone is all smiles eating their sandwiches and cookies, but Sarah is thinking that she needs some options moving forward so she finds Troyzan while he’s out and about. Tom Brady Michigan Jerseys She wants to strike up some kind of alliance with him because she doesn’t like the whole “oh, the four of us are gonna stick together” thing because it’s stupid. She tells Troyzan to not breathe a word of their conversation to the others or they are both dead in the game, says she’s going to look for an Idol, and of course, Troyzan is 100% down with this plan. He doesn’t tell Sarah that he already has an Idol and he’s going to sit on it for now since he has Sarah on his side. Over at Mana… It’s very obvious to the rest of the tribe that Debbie is NOT in good spirits. She makes some remark to the others about them playing together and voting her out then walks away from camp. Hali and Seirra follow her and she’s all Brad doesn’t respect her, he’s got his head up their asses and blah blah blah. Then to US she says that Hali performed horribly during the challenge and she zipped right over the beams… Uh… What? Um… Oookay! Sooo, obviously the island heat has caused some kind of malfunction in Debbie’s brain and her angry outbursts are a little scary to Tai who says she’s like “a crazy lady”. To us again, Debbie says she doesn’t get angry, she doesn’t get pissed, she works out and that’s why she’s got the guns and the eight-pack and Brad is her target – may the best man be left standing. Brad does apologize to her, by the way, buuut… 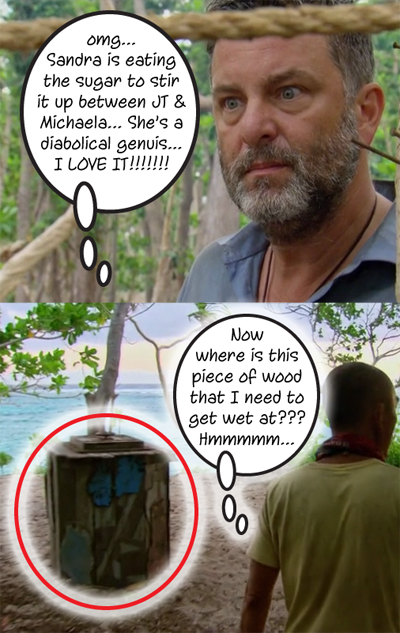 At Nuku, coffee is being made and Michaela would like to try some – buut, she only wants seven drips of coffee and a spoonful of sugar. Sooo, basically she wants a scoop of sugar then? Anyway… JT isn’t happy about this, says it’s ignorant to want a whole spoonful of sugar for such a small amount of coffee, he’s tired of baby-sitting and blah blah blah. Michaela gets her sugar with coffee, though, and later, Sandra decides to keep the rivalry between JT and Michaela going by eating the rest of the sugar telling Varner that if she does this, JT will think Michaela did it and the sparks will keep flying. Later, as planned, JT discovers the sugar is gone and he tells Aubry and Varner that HE knows who did it – Michaela! Varner nods in agreement – he’d believe it. LOL!!! Varner is just as amused as I am… And awhile later, JT makes it pretty obvious to Michela that HE knows what’s up with the sugar implying that SHE is the one who ate it and Michaela is really fighting to keep her temper under control and she seemingly does a good job because we’re taken BACK to the Mana camp where tensions are high. Tai especially feels the tension and since he played his Idol, he decides to look for another one and OMG! Wouldn’t you know it! He finds a clue! He has to find a board that when soaked with water will reveal the tribe motif and instructions to dig below it, but he’s been out a little too long all by himself, and the board will probably be hard to find so he decides to hold off on finding it. And my guess, based on editing and camera angles, is that this board is somewhere around the well… 😉 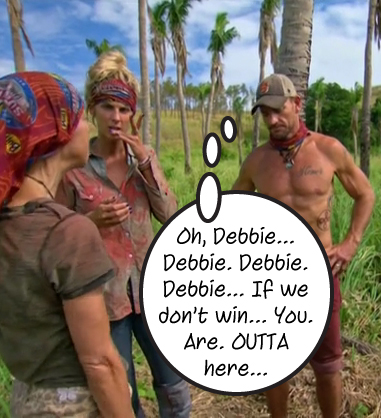 Come on in, guys! It’s time for Immunity! In this challenge, each tribe will have to scale a large wall then push a large cube over to a pole where they will unwind a ring of keys, use the keys to unlock a box full of sandbags, carry the sandbags over a balance beam then use them to knock over a series of targets. Survivors Rea- Oh wait! We get to see Mana strategize! Brad wants Hali to do the balance beam for OBVIOUS reasons, but Debbie is not happy about that decision – she says Hali took 10 minutes, and she, Debbie zipped across it – she took gymnastics for YEARS! It’s a little unclear how they decide to do things because Survivors ready? GO! First tribe over the wall is Mana, Tavua is right behind them, and Nuku is in third place, but before you know it, all three tribes are slinging the key rings. Air Jordan 7 Sierra on Mana is first to retrieve the keys, JT is second, and blah blah blah… Looks like Tai and Hali are carrying sand bags for Mana… By the way, Debbie has been very vocal this whole challenge about how she was the first over the wall, and omg, Tai fell off the beam and how it’s too bad they don’t have a gymnast on the balance beams in this challenge… So Tavua is first to get all the bags across the beam and they start loading up the sling shot to knock down targets. Mana is next to start slinging sand bags, then Nuku and here we go! Sierra scores for Mana, then she scores again, Tavua and Nuku both score, then Brad steps in for Mana and scores point number three, then number four and they only have ONE target left. And I have to wonder if they didn’t contemplate losing this one on purpose… So, it’s down to Tavua and Nuku and they are tied with only two targets left. JT hits one, Ozzy hits one, and it’s down to the final target and… It’s Ozzy who knocks down Tavua’s final target first. Nuku has a date with Jeff…

Back at Nuku camp, JT is campaigning against Michaela and Aubry would like her to go as well. Varner says he’s 100% behind it, Sandra is just sitting quietly and laughing along with JT about the sugar-napping… BUT! Sandra wants JT’s head and she has a talk with Michaela. She thinks they can get Varner on their side to vote out JT. Of course, Michaela is down for this so Sandra has a chat with Varner who LOVES the position he’s in right now. He could go with either pair and he’d actually love to go both ways and vote them both out! He’s concerned about JT having and Idol, though, but before anyone can really chat about that the tribe marches off to Tribal Council sooo… Awaaay we go! Jeff immediately wants to know about what happened at the last Tribal and what happened when they got back to camp. Sandra is open about her feelings that JT gave out enough info for Tai to know to give the Idol to Sierra and JT explains away his dirty deed saying that he didn’t give a name, that he just told BRAD that HE was safe, and that he got burned too when Malcolm left. Michaela vocalizes that JT thinks he’s running things, he says camp life is tough because he has to baby-sit her. Sandra informs Jeff about Sugar Gate and the rivalry between JT and Michaela. Jeff brings up the importance of the vote and Sandra says they are going to keep the strongest person around and move forward with HIM. And this brings about a whole thing with JT saying Michaela doesn’t do anything – Sandra defends her as Michaela lists off the things she HAS done around camp, then Michaela tells JT to shut up and tells Jeff to move on with the next item up for discussion. Jeff wants to know if everyone feels JT is in charge and they all basically agree, that JT speaks for them, except Sandra – JT doesn’t speak for her, but she does agree with his feelings on what’s best to move forward AAAND… NOW I understand what happens next… Dang customers keeping from pivotal moments in Survivor when it airs!!! Becauuuse… The votes are cast and I’m SHOCKED that JT does NOT play his Idol, I was yelling at the TV for him to play the damn thing, but he doesn’t AAAND! #Blindside. JT is voted out AND he didn’t even BRING his Idol to Tribal Council!!! Rule number one, JT. nike running goedkoop Rule. Number. One. But DAMN! Sandra did a good job of misting him… Damn fine job indeed. And LOL… As Jeff is reading the votes, Michaela is sipping on her water and as he leaves, she flips his hair at him. Air Jordan 7 Uomo LOL!!! Next time on Survivor! Drop. Your. Buffs! Again! Whoo hoo! And Exile Island is BACK in action! And a former Survivor is coming to the island? Wait, what? What’s THAT all about??? I guess we’ll find out! As usual, if you like my blogs, check out more stuff here at Your Reality Recaps.