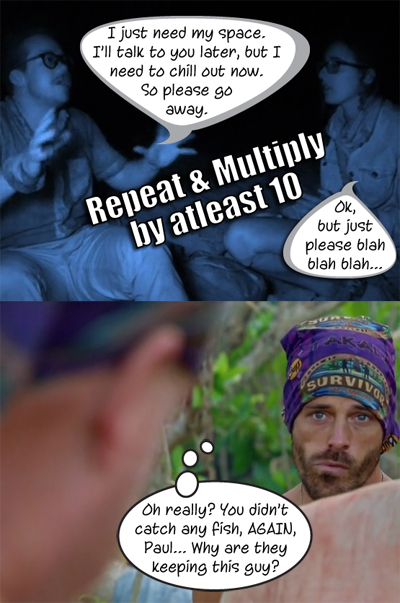 This time on Survivor… When the Millennials return to camp, Adam and Zeke commend Figlor on a well-played move, buuut… I wouldn’t say that Figlor had ANYTHING to do with Mari going home instead of Figgy. Nooope! They have Michelle to thank for the Fig not being detached from the Lor. Figgy doesn’t take credit for her safety, but there were seven votes! Later, Adam and Zeke are chilling on the beach when Hannah drops by because she just wants to say a few things. She begins to explain herself, telling him that Michelle told her that they had the numbers. She did what was best for her game. Blah blah blah blah blah blah! Zeke politely asks her to give him some space, he’s really upset, he’ll talk to her later, but now is not a good time. Hannah cannot stop trying to keep talking to him, though, and it reeeally starts to annoy Zeke. Adam joins in to further help Hannah understand that Zeke is totally all for talking to her LATER, but right NOW – she’s gots to go away! Hannah finally gets the point, sorta, and gets up to leaving saying “go ahead and think I’m the worst person ever,” which is like, the worst thing she could have said. Zeke tells her to quit playing the victim, the boys try again to make her understand that they will talk to her later. Hannah really wants to work with them, she doesn’t really like the other people, sooo, yeah. After she leaves, we talk with superfan Adam who, even though he’s on the bottom of his tribe, doesn’t think we should count him out yet. The next day, over at the Gen X camp, David, CeCe, and Ken know they are on the bottom, but David has that Idol! Elsewhere, Paul decides to go catch some fish for the tribe to eat, but the current is just too strong and he was sooo close to spearing himself some tuna. Ken is baffled that HE is the one people aren’t trying to team up with because HE is the one catching ALL the fish while Paul has failed on multiple attempts to provide food for the tribe. 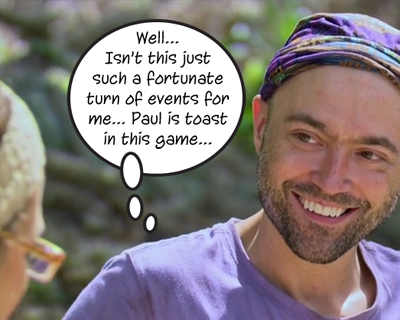 Bouncing back to the Millennials, it’s Tree Mail time and while it is NOT a tribe switch, Jeff is mixing things up with a Tribe Mixer. Four people from each tribe will meet up to do some mingling and it will be a random rock draw to decide who will attend. For the Millennials, Will, Jay, and FIGLOR will be meeting up with David, Bret, Paul, and Cece from Gen X. And Jay is really hoping Figlor can keep their hands off each other or they will really look like a tribe full of silly people keeping a power couple in the game. The two quartets are taken to another island and everyone on the Gen X tribe is in the mindset of the Millennials – loose lips sinks ships. This is about getting information, not giving it away. After peanut butter and jelly sandwiches and milk, a meal that spawns light talk of what’s happening at the camps; the Gen Xers ask if anyone is paired off at the Mills camp and no, nope! No. No couples over there. ::whistles:: So after eating, everyone except Figlor, David and CeCe go swimming. David and CeCe let it be known that no one is coming after Paul and as they are cleaning up some things, David makes a loose deal with Taylor to work together if there is a tribe switch situation or merge. Taylor is all for this.  Right before they head out to swim with the others, David tells Taylor that he will have no problem at all voting out someone on his tribe; no problem AT ALL. 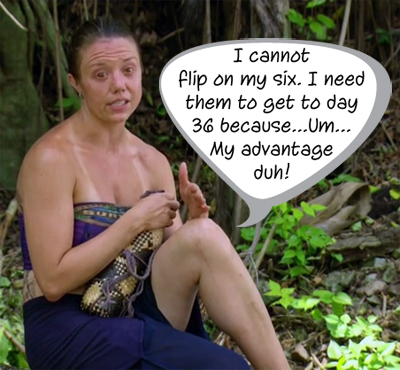 When the Gen Xers return, everyone wants to know how it went and it is revealed to Ken that the Mills call him “Ken Doll”, which they thought was funny because he’s sooo not like that. Ken lets them know that this is not a new nickname, and it’s not a fun one for him because he was teased a lot in school because of his name. He later goes fishing and brings home a bounty under the eyes of Paul. Alone with Jessica, Ken points out that Ken has done NOTHING to provide for the tribe; he’s all talk. She acknowledges it, nods when he tells her that he’s rubbing people the wrong way, and she doesn’t want Ken to feel like he’s on the bottom, buuut she’s got her six and she’s got her advantage so she wants to make sure she gets to Day 36. Back at the Millennials camp, the Triforce and Will are all hunky dory and think Zeke should be the next target. Adam really wants to shift the focus off of him and Zeke because he knows he’s not in a good spot so he has a chat with Michaela and Hannah about who was REALLY responsible for saving Figgy, because it wasn’t Figgy. Adam knows it was Michelle. And Jay. So yeah, they voted to keep Figgy too, but THOSE four… Michelle, Jay, and Figlor… Figlor ain’t never voting them out so who are they going to come for once Zeke and Adam are gone? Michaela sees his points, but for now, she’s just gonna think about things. 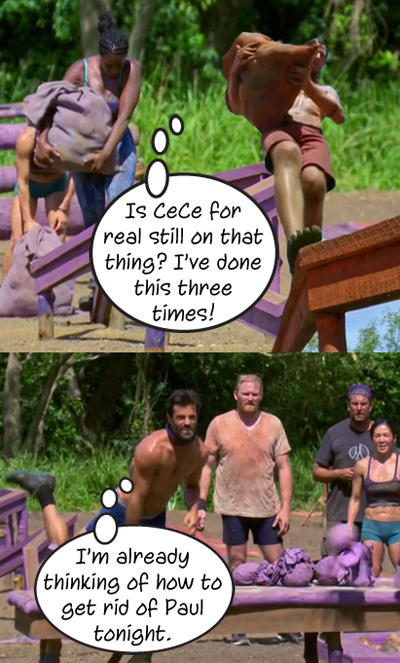 Come on in, guys! Time for Immunity and Reward! Up for grabs – comfort! Chairs, blankets, pillows, candles, and a hammock. In this challenge, the tribes will carry heavy bags over and under and obstacle then over a balance beam. Once everyone is across with all the bags, they must separate sandbags from coconuts and use the bags to knock down pieces of a puzzle then put it back together again.  Survivors ready? GO! Through the obstacles, the tribes stay pretty close; Chris and Taylor start the balance beam for both tribes, then Will and Bret start across with a sack. Will drops, but Bret makes it across. Will has to start over. CeCe begins a journey across the beam, THEN Jeff reminds them that people that finish can go again to carry bags, BUT everyone must make it across the beam, even without a sack. Figgy takes Will’s place with a sack and Taylor has run back and starts again after Figgy finishes. While CeCe struggles in some personal quest to do this and prove something… Taylor has landed another bag on the mat and Figgy finishes another go, then Taylor comes back with ANOTHER bag. Sooo…  the Millennials have taken a HUGE lead, and by the time Lucy makes a go at the beam, Taylor has landed their last bag so all Will has to do is make it across, followed by Adam. Lucy drops her bag and… I mean… Gen X needed to take the cotton out of their ears and listen to Jeff because the great equalizer, the puzzle could not save them. It wasn’t even CLOSE! The Mills gained too big of a lead. THEN… Jay asks if they can trade comfort for fishing gear before they leave Jeff to go back to camp. The only way Jeff will do it is if Gen X agrees, but the comfort isn’t nearly enough to earn fishing gear, but Gen X doesn’t agree to the terms anyway. Hahahahahahahahaha! 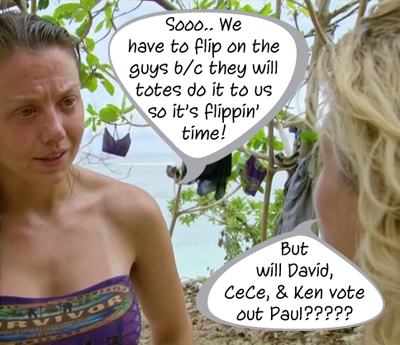 So back at camp for the Gen X tribe… People are upset with CeCe because she took SOOOOOOOOOO long because she was stubborn and wouldn’t drop to let someone else carry the bag who could do the beam faster. There’s no question to Paul who should go home, and he knows it’s not good to get too comfortable, buuut he feels pretty confident that everyone is on board to boot CeCe out of the game. Bret, Chris, and Sunday are definitely down for this plan. CeCe knows she’s not safe, she knows how tight the six are. Later, the Bottom Three know they need to make a move against Paul. David has gotten the Idol from his hiding place. Elsewhere, Jessica talks with Paul and Sunday and Jessica lets them know that she’s good with CeCe going and something about wanting to make sure there was no boys thing happening and Paul makes the mistake of saying that if there was – good luck, girl. Well! Jessica doesn’t like this comment ONE BIT and she tells Sunday and Lucy that the three of them are the bottom three of the six as far as she is concerned. Lucy and Sunday are both down to target Paul, but they would need CeCe, David, and Ken to be on board to vote with them… Jessica is worried about what will happen if they vote out Paul, but she’s also freaked out by what would happen if they DON’T vote out Paul.

Let’s go to Tribal Council! After asking David a question, Jeff notices that David seems to be a lot more comfortable at this Tribal. He attributes it to the visit with the Millennials, it was such a good experience to get out of the game for a bit. He doesn’t feel safe or anything, but he’s just more comfortable in his own skin. After, CeCe lets Jeff know that it’s definitely herself, Ken, and David on the bottom. Chris says it’s WAY too early to talk like that. LOL Um… No. No it’s not. Jeff brings up how badly the Gen X worked together – there was no team work. Bret says it could be pride, but who knows. Jeff just can’t get over how efficiently the Millennials worked together. Sunday says it’s because they like to do things in different ways. Jeff asks if they text and if they spell “you” or just use “u” – most everyone says they spell it out, but it’s so much more efficient, Jeff says. Then he says it’s like saying you like vinyl better than digital and Ken say yeah because it sounds better! LOL Before the vote, Jeff asks how the paranoia is and Paul says it’s probably being felt more about the bottom three, and maybe some in the six, but definitely those other three. Ken expresses how much he wants to be an asset to the camp, CeCe gives herself a 10% chance of surviving this, then Jessica points out that the result of this vote will help the tribe… And it’s time to vote!!! Then Jeff tallies the votes, then he asks about Idols – David chooses to NOT play his Idol sooo… The VOTES! Paul, CeCe, Paul, CeCe, Paul, CeCe… PAUL! ZOMG1! And the next… PAUL! WHAAAT!? I was sooo shocked by the vote because I missed the ENTIRE “after the challenge” segment while watching at work because I was with customers. So, like, I’m THRILLED and sooo excited. Next time on Survivor, it looks like things are gonna get a little crazy during the next Immunity challenge! And there’s some tension or whatever with Gen X – totally expect THAT! Can’t wait to see this water challenge!

If you love Survivor like me, check out ALL my Survivor blogs for Your Reality Recaps – If you like theAmazing Race and King of the Nerds – check those out too! AAAND… Big Brother 18! I won’t be blogging about Big Brother Over the Top, but I will be watching and chatting in the YRR live feed chatroom as “dolphinpoet”. Be sure to watch Eric’s video recaps of the Survivor season AND all of his post-season Big Brother interviews and join the Patreonprogram if you really love what you see here at YRR! Love you all! xoxox

Survivor 33 Millennials Vs Gen X Blog Recap Episode 12: About to Have a Rumble