We pick up where we left off last week with Tamra still pissed by what Brooks said. Heather is tired of being silent so she pulls Vicki aside to talk. He 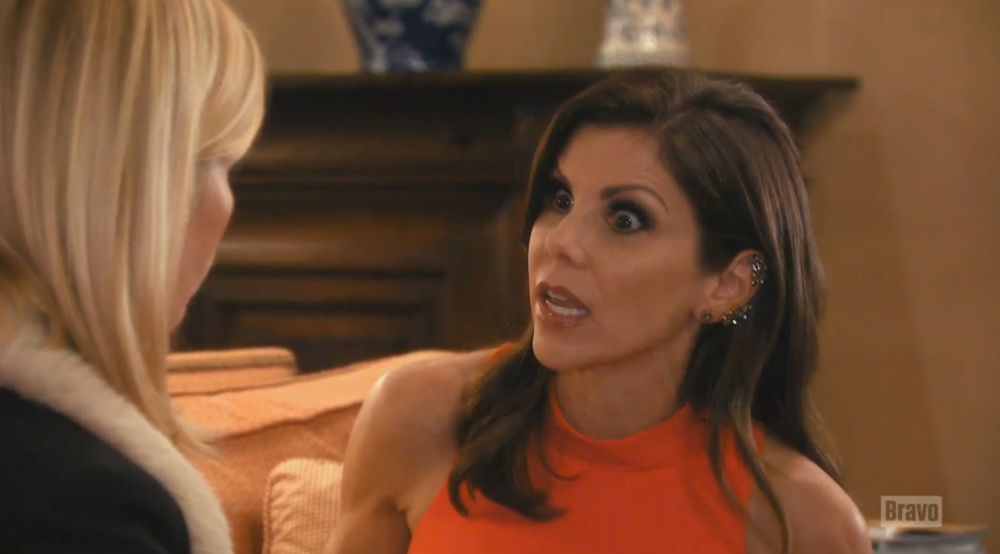 ather has gone to the doctor that Brooks said he is using years ago for cellulite treatment. She tells Vicki she is worried that Brooks is being lied to by the doctor or someone else is lying. They go back and forth on what was said or wasn’t said a cut fitness a couple of weeks ago. Heather isn’t letting go that there is holes in Brooks story. Heather tells her if they would just show proof that this would all go away but Vicki right away says NO. Brooks walks in and their convo ends. Immediately after their talk Brooks and Vicki leave without telling anyone bye. The girls sit down and Meghan and Heather tell the girls how their conversations went with Vicki. Shannon is shocked when Meghan tells her that Vicki said she never asked her for help. Heather tells the girls about the doctor situation and how she wouldn’t let Vicki off the hook.

Next day Tamra heads over to Vicki’s house to go over what happened the night before. Tamra apologizes for yelling at Brooks and tells her how the ladies all have doubts. Vicki tells her she already knows and is over it. Tells Tamra that if she was really her friend she would be telling them they are crazy. Tamra said she has tried to defuse Meghan. Tamra asked why not show the records to shut everyone up. Vicki’s frustration is so apparent and tells her no. Vicki says she is over all the gossip and wont show anyone proof. They end their conversation with Vicki telling her that if is a true friend she would shut it down.

. Tamra and Meghan meet up to workout and Tamra tries to get it into Meghan head to drop it and it will all come out on its own. She doesn’t seem to be quite getting through to her because she is set on the fact that he doesn’t have cancer. Again tho Tamra tells her that sometimes when you back off something it just happens on it own.

Tamra and Eddie take Ryan’s family to see their new place. Ryan seems to be very annoyed with the family. Has to be hard having all those girls. Ryan thanks Eddie and Tamra for their help with the house. They are in the middle of packing and prepping to move everything down. Family life is diffidently taking a toll on Ryan. Heather and Lisa Rinna meet up for drinks. Heather wants to ask for advice on doing TV sales for their new Skin Care product. Lisa tells her that its like acting…ignore everybody’s advice and be yourself. Lisa asks how home life is since Terry has been doing his TV show. Heather said they have been handling it great but really wants Terry to tell her thank you for everyth

Shannon meets up with Vicki for some lunch. Shannon is extremely frustrated by all this cancer questioning and wants to help Vicki. Vicki semi says sorry for leaving the party early. Shannon tells her the ladies keep coming to her asking why Brooks didn’t go to the doctors she setup. Vicki is annoyed right away since she was already having a bad day. She tells her why does it matter to her if Brooks went to her doctor or not. Shannon just says it just adds to all the holes in their story and doesn’t want to question if he has cancer or not. Vicki doesn’t understand cause if Shannon was her true friend this wouldn’t be happening. Vicki is confused and asks what they are supposed to do then.. Shannon says to just show a piece of paper to prove it which sets Vicki off saying she’s “DONE”. Tells her if she is going to keep talking about this to talk to Brooks. This lunch ends sadly with Vicki feeling betrayed and hurt by Shannon.