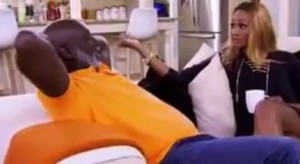 It’s the day after Cynthia decided to bring up the Chocolate rumors and Phaedra almost beat the implants right out of Kenya and last nights dinner is the talk of the group. Peter is holding an awards gala that night and Cynthia had invited all the girls but that was before a WWE fight broke out at a restaurant. She tells Peter around last nights events. They both agree that maybe Kenya hit a cord with Chocolate because he’s real. Cynthia wouldn’t blame her from moving on, she would too but now she’s left wondering who will show up to the event. Porshe and Phaedra are discussing it over lunch as well. It’s seems everyone has an African Prince, is Atlanta where they all go to vacation? The major concern with Porshe is Kandi and why she wasn’t more vocal and quick to defend her friend. Phaedra wonders too and also thinks she is done with Cynthia.

Kandi has bigger issues in her life than if Phaedra is sleeping with Chocolate, Vanilla or Strawberry. She’s in a therapists office trying to save her marriage. Her issues are that she feels Todd prefers LA to Atlanta because there is more stress and she wonders if he’s cheating. While skirting around the cheating accusations he brings up the pre-nup Kandi had him sign and he feels she really did it in a cold, robotic way. He says he’s over it because he knows how things are. If it doesn’t go Kandi’s way things will be rough. They both admit to the bedroom activities being not the greatest. The therapist gives them some homework. They need a date night! Just them, no phones, no social media and they need to write a list of things about their relationship they like and dislike. Kandi seems all for it, but Todd looks like he could care less.

It’s the night of Peter’s big event. Everyone on Cynthia’s “side” shows up and Kandi who is always neutral comes too. We find out from Peter talking to Todd that Kandi knew about the cheating rumors because Apollo had shown Todd. Cynthia suspected that but Kandi is denying she knew anything. The girls aren’t buying it and think that even though they are friends Kandi should be calling out Phaedra for the things she does wrong. Kandi wants no part of the drama and is no feeling like she’s being cut from Cynthia’s circle as well. Her neutrality is going to get her into some trouble if she’s not careful. All these girls wants a side to be taken. Kandi is shocked to find out she has received an award that night. 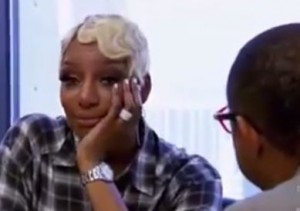 NeNe is also in a therapists office. She wants to get the girls together and have  group therapy session so they can lay all their issues out and confront them head on.  Dr. Jeff helped her and her family and she thinks he can help them too. She lets him in on a bit of the dynamic between the girls. She tells him its going to be hard but he is really the last chance they have. If he can’t help them she isn’t sure what is going to happen. He agrees to the challenge, he sees he’ll have a lot of mediating to do. He also lets NeNe know that even though she is the one that made this happen he is going to hold her to the same standard as the girls. He will call her out on her shit if he has to, it’s going to be a fair environment for them all. 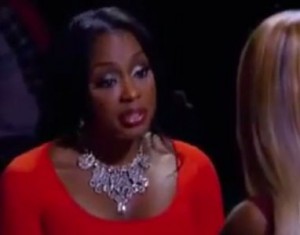 Cynthia invites Phaedra to lunch to talk about the dinner. It doesn’t go well. Tension is high. Phaedra wants and apology that Cynthia isn’t going to give her. She just wants to have a conversation about things. When it comes clear to Phaedra that things aren’t going to go her way she gets up and walks off. Cynthia honey, you need to just sit back and not be the stirrer of all the drama. Mama Joyce meets up with Kandi at her Tags store. The two haven’t been spending too much time together. She tells Kandi she’s been to the old house (remember the one Kandi gave her, she destroyed and said she wouldn’t live in) and it looks amazing and she wants that house. Are you kidding?  She also tells Kandi that she’s changed,  she doesn’t go around the family much since she’s been married. Kandi tells her it’s because she always finds fault with HER but never takes any responsibility for the stuff that she does. She has so much going on in her life she can’t worry about her mothers feelings. Mama Joyce extends and olive branch and hands Kandi a key to the house and the remote to the garage. Baby steps between these two may be the solution. 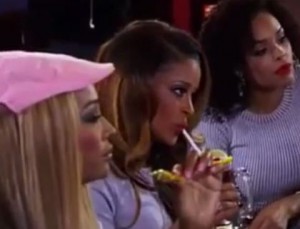 NeNe invites the girls out to lunch. Phaedra and Kenya are absent because NeNe didn’t want another fight to break out. As always the girls are always a littel nice/nasty to each other. She tells them about the therapist and how she wants them all to put their issues out on the table. Her and Claudia chirp back and forth. Claudia wants to know where  NeNe’s nastiness towards her comes from. NeNe says she apologized for it and it’s time to move on. Cynthia and her banter back and forth a bit and it’s clear these two aren’t coming to any solutions today so Cynthia is happy to leave it in Dr Jeff’s hands and excuses herself. Kandi feels she doesnt need to go and says she won’t when NeNe and sidekick Porshe start in on her about Phaedra. Demetria and Claudia don’t want to be part of this and go to the bar. NeNe and Porshe tell her that she has issues with Phaedra she needs to work out which is news to Kandi. They tell her how they feel that she isn’t backing her up in the way they think she should. She needs to choose a side. Kandi things Phaedra is just mad that she told her Apollo should have been able to see the children, but agrees to attend the therapy session in the end.

Will this be the thing the girls need to finally put all the differences aside and at least be able to eat dinner without killing each other? Comment on that and what you thought of this weeks episode below. Don’t forget to check out our BRAVO page for all our recaps on all the Bravo shows plus Jon is reading you the ladies blogs and giving you his take on the weeks events. ALSO we are covering THE BACHELOR, HELLS KITCHEN, Survivor, Amazing Race, RuPaul’s Drag Race and KING OF THE NERDS so check out their pages to keep up on what’s happening. Head over to AMAZON.COM to do all your online shopping. You’ll get all the same great prices and it will also help us to continue to bring you coverage of all your favorite reality shows.