Trending
You are at:Home»BLOGS»UTOPIA»Katie or Cal: Who is the next Utopian? 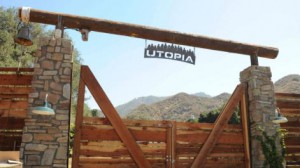 As most of you know by now, Red was the first person to be officially voted out of Utopia in an “emergency” vote. Personally, I am a little angry at those results, and I believe by the reactions on Twitter, that most of you are too. Why couldn’t it have been Bri, the so-called veterinary aide who has been mistreating the animals? I could go on for hours as to why Bri should have been the one sent packing, but that’s not the point of this blog.

The two “Newtopians” vying for Red’s vacant spot in Utopia are Katie and Cal. Only one of them will be allowed to become a full-fledged member of Utopia, while the other one will be sent back home again.

First up, we have CAL. Cal is a 40-year-old farmer from Portland, OR. His bio on the FOX website says that his skillset includes hunting, animal husbandry, carpentry, CPR and and he also studied midwifery. Wow. So this guy can do a little of everything! And if he has knowledge as a midwife, that could come in handy in the near future as Amanda is due to give birth in the near future. He is most likely to “hook up with Bella near or right under her apple tree.” *insert shocked face emoji here* His natural enemy is social media. Well, that’s good. He won’t miss it too much while he is gone. And that means Twitter is free to talk smack about him because he won’t be around to read it. (Don’t do that. I was kidding.) Cal’s utopia is four hours of work, four hours of service, and four hours of play. Also, his utopia includes no leaders and a clean kitchen. I can’t say I disagree with that!

Next up is KATIE. Katie is a 29-year-old single mother of two who hails from Sacramento, CA. She is also an animal

rescue and animal rights advocate. This cannot be just coincidental. She comes right at the height of a controversy involving Bri and her mistreatment of animals at Utopia. Her skillset includes cooking and cleaning (always a good thing… the current Utopians are FILTHY!) She is most likely to butt heads with Huntress Hex (aka Katniss) over her hunting. Ohhhh, snap! This could get interesting! I wanna see Hex get into it with someone! Katie is also the first openly LGBT person to possibly be on the Utopia cast (her bio says she is bisexual). Her utopia is “an animated kids’ movie” aka a place of “compassion and mutual respect between humans and animals.” I guess it’s a good thing she wasn’t around when Red shot Bambi.

Who do I think will be the next person to enter? Well, it depends on who the Utopians decide. But, methinks it will be Katie, as she is an avid animal rights advocate. This could be Utopia’s answer to the controversy with animal mistreatment involving Bri.

Based on the bios alone, I would be happy with either person entering Utopia, but I am leaning more toward Katie as well.

What are your thoughts on Katie and Cal? Which one do you like better and want to see join the Utopians as the try to build their ideal society? Comment below and let me know your thoughts! And don’t forget to follow @UtopiaLiveFeeds for up-to-the-minute live feeds information and remember: Utopia will now only be airing on Friday evenings! As always, don’t forget to sign up for the live feeds here. Later! 🙂